Esports is making huge waves in popularity, both among active competitors and also among companies aiming to register their profits from the evergrowing gaming industry. The beauty of the thing is that esports merges peripherals, gadgets, sponsorships and more into the world of gaming, which we love so much. As a result of this mix, a lot of competition between different brands is being created, giving way to improvements upon improvements, faster than ever before. Peripherals are definitely one of the most competed markets, which means new ones are released on for sale relatively quickly, with improvements to previous versions to attract more customers than ever before.

As Esports is mostly based online, the main components of a gaming rig consist of a headset, or mostly mic and headphones to be able to communicate through Teamspeak, Ventrilo or more recently Discord. While headsets are very easy to find on the market, standalone microphones are very rare to find, and quality ones are probably even rarer. That is why the Studio Pro Microphone USB from Sandberg comes by as a revelation to us all.

The microphone is the first standalone which I have ever used, and will most definitely be probably the last as I found it to be very good. Coming out of the box, you will find a number of components which you will need to assemble together to have the finished thing, which is not so small but is not too large either. There are only a few pieces to be joined together, and a helpful leaflet is also included to give you an idea as to which part has to go where. It is not the clearest of instructions manual, but it is barely enough to get the job done. Once finished, you only need to connect the USB to whatever device you will be using and you are good to go.

You can see below the assembled microphone, and while it may appear to be a bit bulky, it really is not thanks to its long base which helps stabilise it and not make it fall over. This means you can place the microphone near the edge of the table and not risk having it fall off. 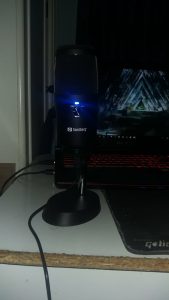 As far as recording goes, which is its proper function, it is very good. Recorded sound comes out clear, and surrounding noise is mostly cancelled out. Quality of playback is very good as well; I tried playing music from my phone and recorded with the microphone, and the result was almost identical to the music if you were to play it through headphones. If it is one thing it lacks is distance detection – it does record from a little distance, but the volume would be very low. Nonetheless, its shape and stand make it very ideal to place it close to your mouth and talk away.

The microphone also has a 3.5mm jack slot where one can insert headphones or earphones and set playback directly through the microphone. Doing this will also permit you to hear your own voice in real time, as useless as that sounds. I tried it and was awestruck – not because of how sexy my voice sounds, but because it’s something you do not get to experience often. So one thing I definitely recommend doing if you get this microphone is hearing yourself. Your mind will be blown.

After covering all the features of the microphone, I must say that I was pretty impressed with this. Its recording capabilities up close are amazing, even though it suffers a little when having to do so from range, although playback quality from up close more than makes up for having very limited range.  I would recommend this microphone to everyone if it were not for its relatively steep price of £100, but for those who can afford it, do it, and you will never need to spend money on recording equipment again.