Ever since my OnePlus Two broke, I’ve been stuck with the HOMTOM HT26 as its replacement, and whilst it isn’t a bad phone for the price, the battery on it over time has become shockingly bad. I mean it holds power for less time than King Louis XIX, well, that might be a slight exaggeration but you get the point. So, what better way to try and resolve the issue than with the MOXNICE 10000mAh Power Bank.

The build quality for the MOXNICE Power Bank is, for the most part, very good. It comes made from a tough casing that absorbs shocks well, which I know because I have dropped mine several times now, and its design utilises space well so its built-in cable tucks in nicely to avoid any damage occurring to it. The cable itself also feels of a decent quality, whereas other models I’ve had wires fray and snap, I’m not scared to pick this one up and dangle the Power Bank by it because it feels really secure.

Another nice aspect about the Power Bank’s design is its size, it can comfortably fit in the palm of your hand or slot into a pocket, and being so slim, it can hide behind your phone as you plug the cable in to charge it up. Getting to charge it up though did raise questions about a design flaw though, as I would’ve thought the charger would switch on automatically when plugged into a device, for some reason though I have to give mine a tap in the centre to boot it up. Not a major issue but it wasn’t in any instructions to do so, so maybe I just had a faulty one. 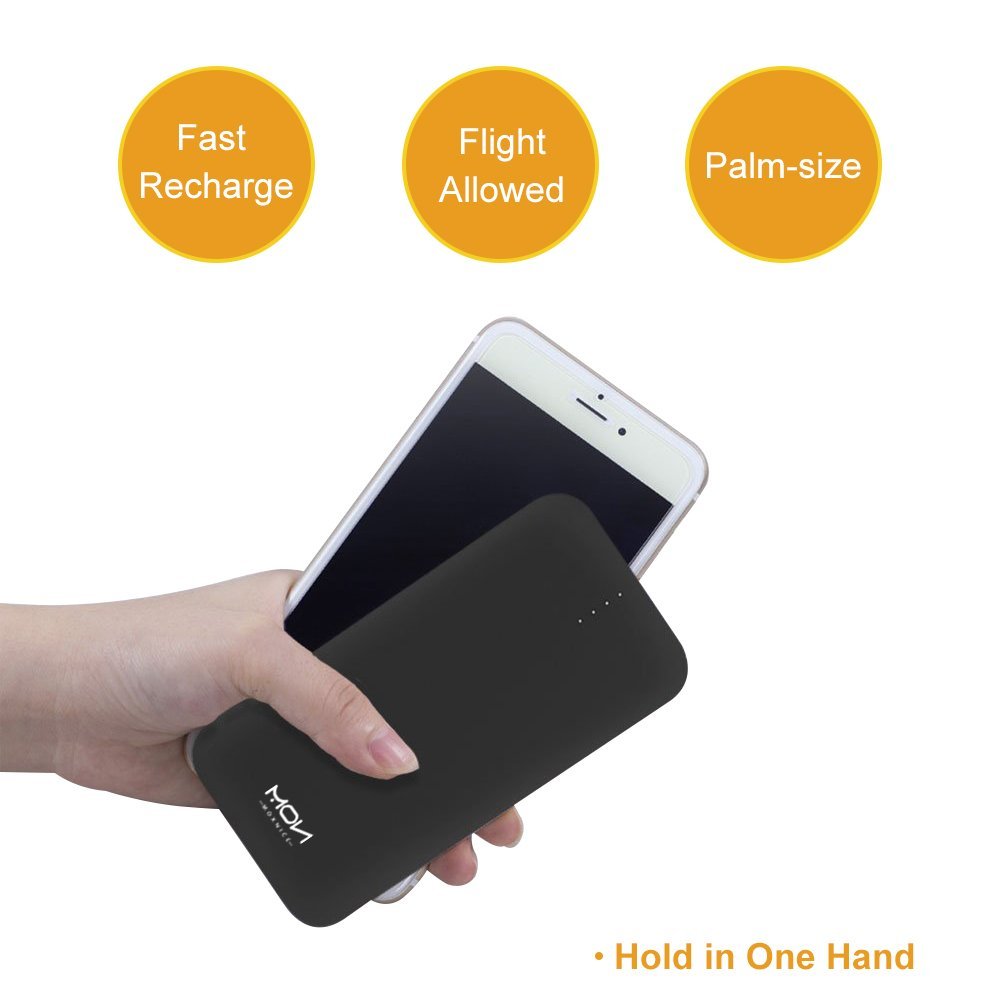 Where the MOXNICE Power Bank really shows off what it can do is during the functionality tests. As mentioned in the Build Quality & Design section, the cable is built-in, which is a nice little feature to have in itself but once peeled back, it uncovers some hidden secrets. First up, and the least exciting of the two, a USB slot is available to plug any other cables in so you can charge two devices simultaneously. The second feature hidden away is a small slot that can hold either a lightning cable or USB-Type C adapter to click onto the end of the micro USB cable. This means no matter what device you or your friends have, this Power Bank will have you covered.

Another nice feature of the MOXNICE Power Bank is also the ability to check your battery level, which is indicated on the front of the device by 4 LED lights. These lights power up whilst charging devices or being charged, to show you how much juice is left. But, should you be searching through a drawer full of power banks as I have in the past trying to find one with some charge, rather than going to the hassle of having to plug it in, just give it a nice quick shake and it’ll let you know how it’s doing for power. 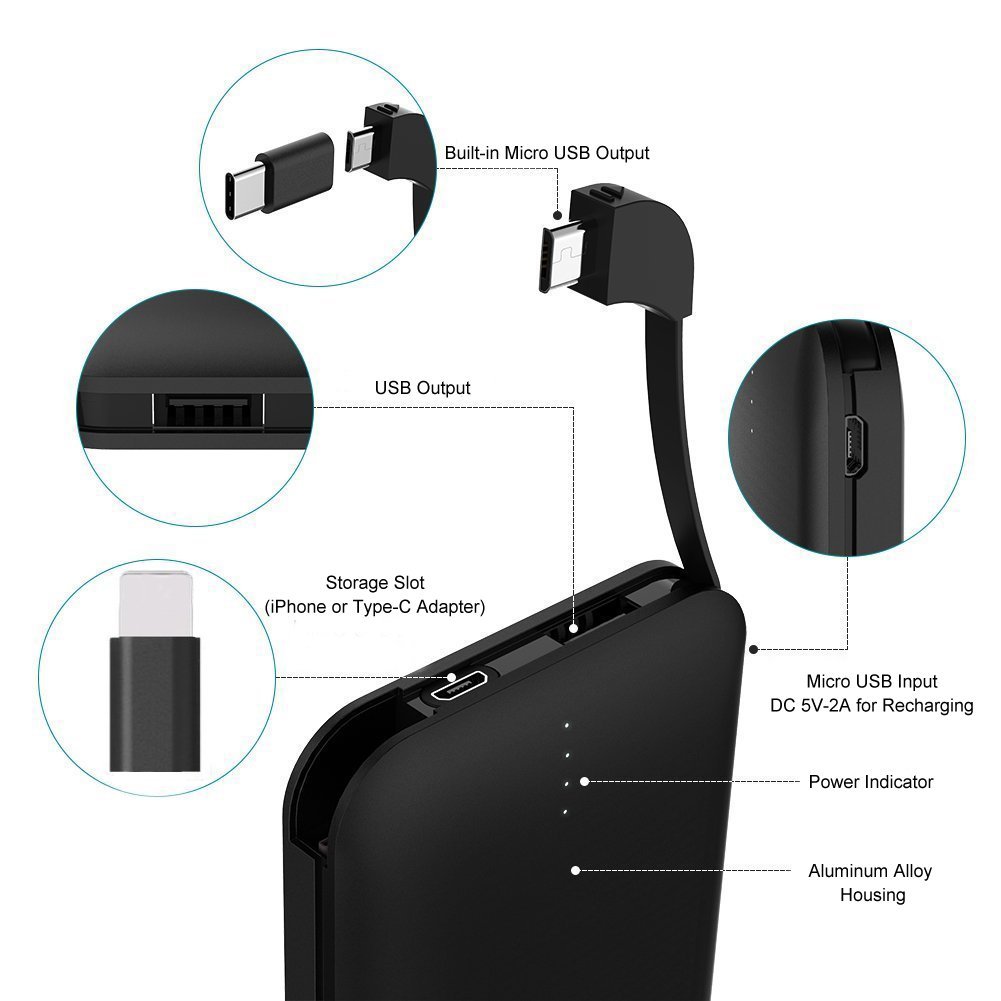 When it comes to value for money, you really do get quite a lot. Not only do you have a fantastic sized battery that can carry enough charge to power up an iPhone 8 4.2 times, but it also has a built-in wire and adapters to suit so you aren’t having to lug around extra cables with you. And not just that, but the Power Bank also comes with a nice little slip on wallet to keep it looking stylish and dust-free as well as a small cable to charge the device itself.

Therefore, when you match it up to similar PowerBanks in the price bracket, you’re actually getting a lot of bang for your buck here, because many don’t offer as many features such as the universal adapter for different devices. If you really wanted to you could go out and buy a cheaper one, but by the time you purchase all the different cables and stuff for it, well, you end up spending the same anyway if not more than you bargained for. 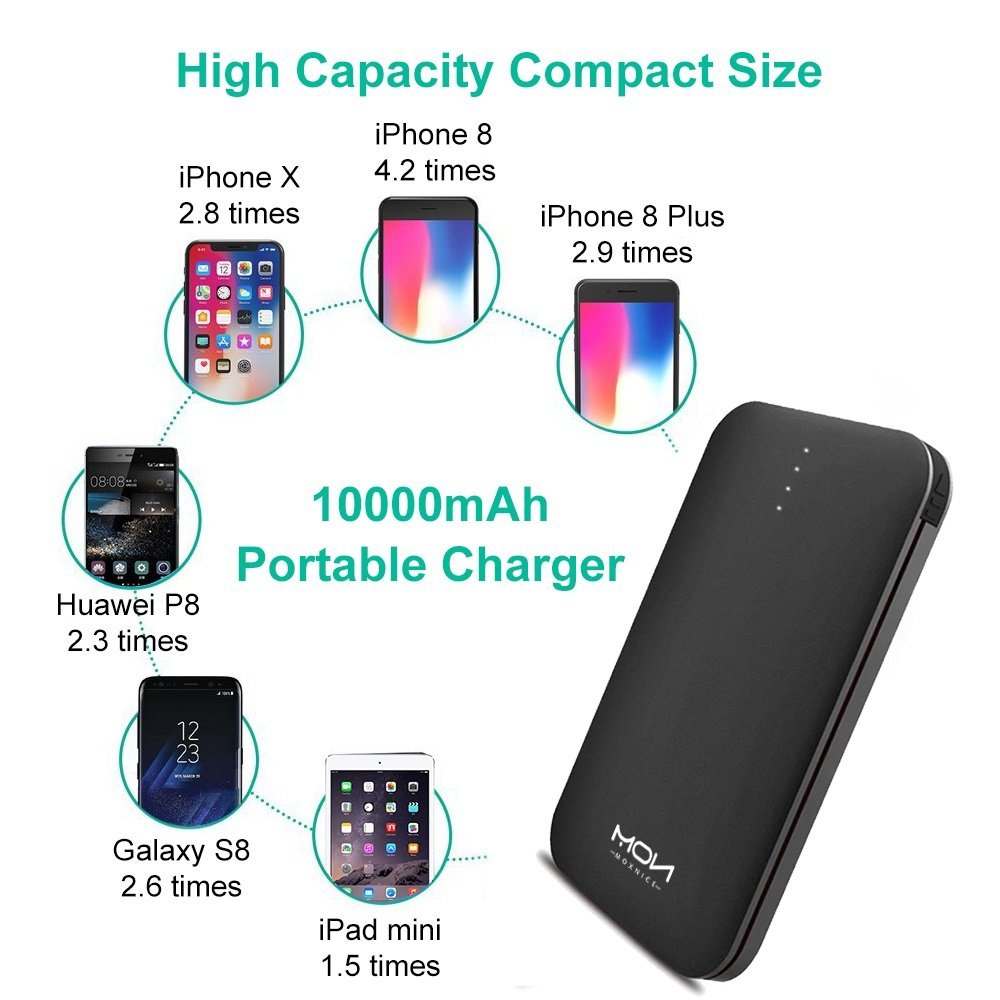 To conclude the review I think it’s pretty self-evident that a gadget like this is a pretty decent buy. Scoring high in all areas, the MOXNICE Power Bank is not only a solid build that does the job it is designed to do well, it comes prepared to cover you and your friends for all eventualities by offering multiple adapters to suit your needs, and is ideal for the festival season. That said, there was the issue I had with switching the Power Bank on but having messaged the seller directly, they insist this was a one-off fault and were happy to send out a replacement for me free of charge, but since tapping it seemed to do the trick, I opted out as I was quite happy with what I had.

The MOXNICE 10000mAh Power Bank is available on Amazon now for £20.99 (price correct as of 15/06/2018). You can click on the image below to be taken to the same seller we bought ours from but we’d like to inform you that we may earn monetary compensation for any purchases made through the link.