Having reviewed tech products for many years I’ve come across my fair share of IP cameras. They can be great for a number of reasons; from protecting your home against would-be burglars to keeping an eye on your pets at home to make sure they’re not leaving you a sloppy present in your shoe. So what does the Cocoon smart home security system bring to the table compared to some of my previous encounters?

First impressions are always important and an issue I’ve always had with other IP cameras is that they’re always like bright white and really stand out. For some, that’s a good thing, as being visible means it can act as a deterrent. Personally, I like something that blends into its environment and can be hidden away from peering eyes. In this instance, the Cocoon certainly ticks all the boxes for me. As you can see below, it has a lovely design which can easily blend into the decor of any home, sitting nicely tucked away on a shelf with people unaware they’re even being watched.

It doesn’t just look good though, it feels quality too. Quite weighty may sound like a strange positive, but knowing it has some weight to it makes me feel it’s not some cheap plastic Chinese knock-off, and also the texture feels, not tough, but durable enough that you could accidentally knock it off a shelf and it’d live to fight another day. The only downside is that there is no way of fixing the Cocoon to the stand the camera rests on, and although I have said it feels durable, that added security of knowing it is fixed down would be nice to have. 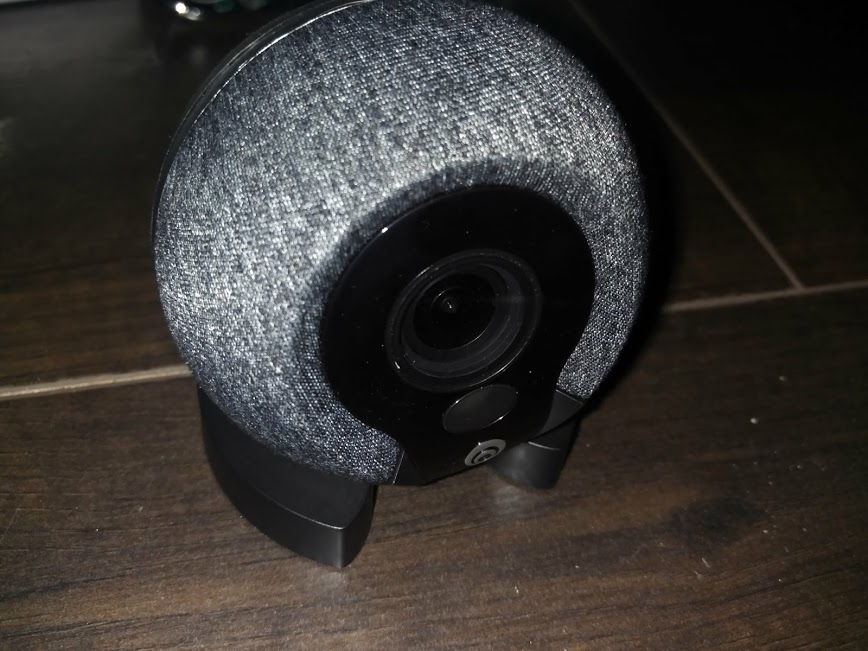 Ok, so this bit was a little bit awkward for the review as there were no instructions included. Fortunately, that was just an oversight in which somebody forgot to put them in the box and so they don’t expect you to work out how to set it all up like some kind of tech psychic. Despite a lack of instructions included though, I was able to get some, not that I needed them in the end as I saw there was an app on the box. I downloaded that straight away in the hope it would have a set-up wizard, and surely enough, it did. Following this was so simple, and set-up must’ve taken no longer than 3 minutes.

I will warn all who read this that if you have conspiracy theories that you’re always being watched by the government or even aliens, then you may not want to get the Cocoon. This is because as part of the set-up process you do have to give it access to your location on your mobile in order to fully access all the features it is capable of. If you don’t want it to know though, it is possible for it to still work, it just won’t have access to things like the function to automatically arm/disarm. Still, it’s really easy to do this manually on the application. 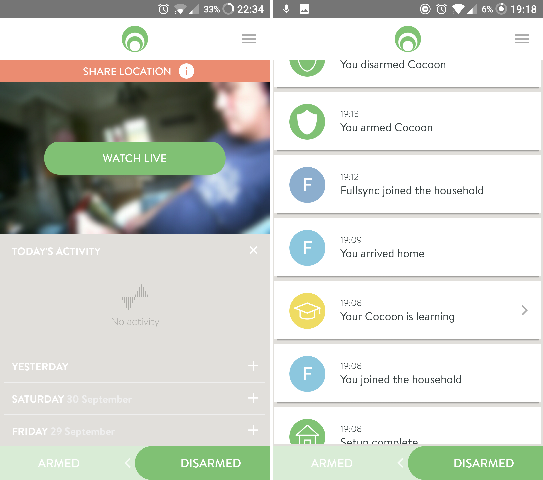 When it comes to features and functions of the Cocoon there is a lot going on, and the main one is its biggest selling point. By monitoring your location on your phone, it knows when you leave the house and so arms itself to protect your home. If it detects movement, or sound for those super sneaky, slow-moving criminals, then it will send an alert to your phone. From here you’re able to either ignore the alert if you see it was just the Cat setting it off, or the kids have come home early from school, or you can activate a loud sounding siren which pierces the ear of any intruder. It won’t just work off one device though, you can invite everyone in your household to join so it will always know when people are in or out and so will only arm itself when it needs to.

The quality is rather good, although not the best I’ve ever seen. Images are clear and you can easily distinguish faces and other details such as logos on clothing, and sound is again ok but not the best I have heard on some cameras, as it sometimes comes across a little echoey, but maybe that was just my phone relaying the sound rather than the mic on the camera. But having tested it on more than one phone and having the same effect I can rule out any of my devices. There is also a delay in what is displayed on the app from what you are looking at in real-time, but that is just a standard I’ve noticed across the board so don’t worry if it is something you experience as the images and sounds have to bounce around the web before arriving on your phone.

The main downside to do with function, or rather a lack of, is that on many other cameras (at much smaller costs than the Cocoon I may add) you have the ability to move the camera from your app. Panning from left to right, up and down, and even zooming in and out. This, however, is just a fixed view, it doesn’t rotate or anything, but because it uses a wide-angle lens, it means it can capture the full room if placed in the correct location. But I do like that on other cameras, you can pan around and say go from being focused in one room, to turning and looking into another, or even going from inside to looking outside. 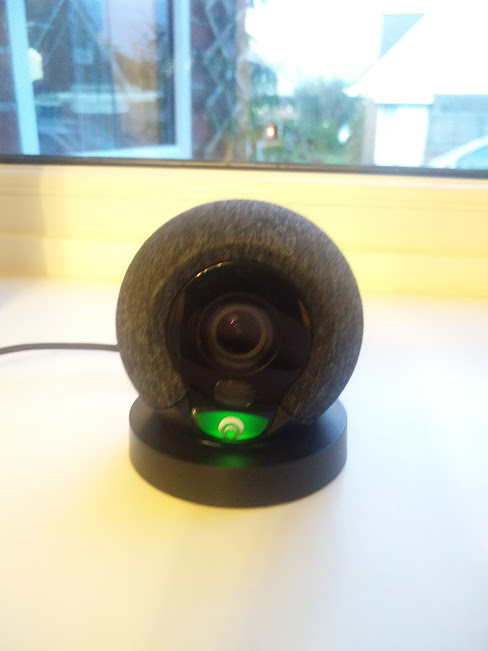 Sometimes paying more means you get a better quality product, other times you can be paying purely for a brand name. With the Cocoon it falls more into that first category, although I don’t think that at £159 that it is that much better than a lot of the cheaper alternatives. Don’t get me wrong, it’s a great little camera and it’s the first of its kind with Smart capabilities that automatically works when you’re not at home, but the jump in price for having to press a button to arm and disarm an alarm yourself isn’t really worth it. Having said that, unlike some cheaper models it doesn’t fully rely on visual stimulation to create an alert as it has Subsound technology as well, and so that is an added bonus which adds to the value because it is essentially a 2-in-1 system. 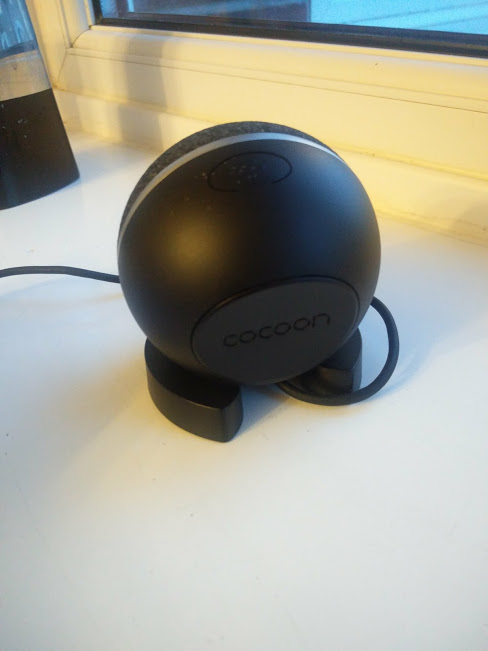 In summary of everything I’ve discussed so far, I can definitely say the Cocoon is a very clever product that has come to the market at just the right time with the hype around Smart technologies beginning to really take off. There are a lot of cool features such as the location tracking that automatically arms/disarms the Cocoon, and the additional use of Subsound technology so as not to purely rely on the camera itself. However, for the money that you pay, I think improvements can and should be made such as having a fixed stand for the camera, and also the ability to be able to move the camera and pan across the room. If these improvements were able to be added, then I think we could potentially have a 5/5 system here. Still, 4.1 is a very high score and the Cocoon fully deserves it.

If you fancy getting one of these devices yourself, or just finding out more information about the Cocoon, you can do so by clicking HERE to be taken to their website.