When gaming online with friends there are three things any gamer needs; drinks (beer, energy drinks and tea are all acceptable), greasy takeaway food and a decent headset to allow you to shout abuse over. If I were to review the first two things then I’d only end up ranting about making the perfect brew or whether it’s better to order pizza or fried chicken (realistically though I’d just get both), so instead I’ll focus on the headset for now. The ideal design for me would be a headset that is unbelievably comfortable for long gaming sessions, has crystal clear clarity in both audios played and what the mic picks up so no one can hear my Mum sobbing about Emmerdale in the background, and finally, bass that packs a bigger thump than Anthony Joshua. Let’s see how the Blue Storm wireless headset by Sandberg matches up to that description.

Without a doubt the most important part of any headset is the audio, without it you’d just have a pair of ridiculously styled ear muffs for the cold winter months. It’s not just audio for chat that’s important either, it can also help you in games. Get the right headset that can muffle the background sounds of your annoying family and has decent enough specs, and you’ll be able to become an assassin (camper) hiding in bushes and listening out for the footsteps of your enemies as they approach.

As far as the Blue Storm headset is concerned, audio quality is remarkably good for the price that you pay. Sound comes through crystal clear, even at high volumes, no muddyness or distortion what so ever from the tests I put it through, which included listening to Alter Bridge live at Wembley. The bass packed a suprisingly good punch too, maybe not equal to a KO thump from a heavyweight boxer but a decent enough one from a welterweight, which is where about this headset fits in if you convert weight catgeories into a the value of headsets.

In terms of the mic, audio quality was fine but due to it being inbuilt into the headset it has to be very sensitive, meaning it picks up background noise like Stark picks up girls down the local bars. If you’re in a quiet environment though it shouldn’t be too bad, just be wary that if your girlfriend is nagging you, you’ll not live it down from your mates as they use that material to mock you throughout the rest of your gaming session. 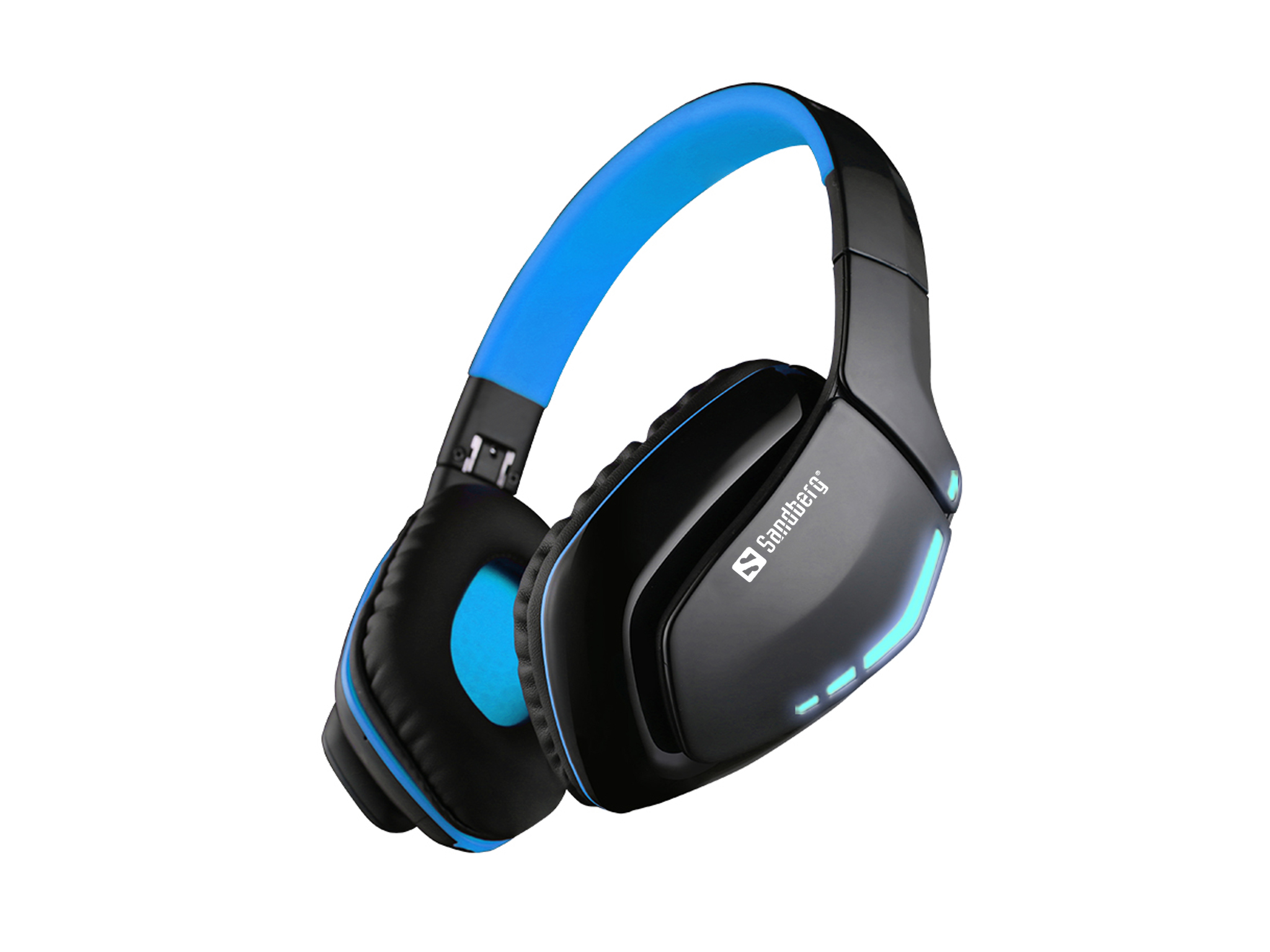 Comfort is a really important part for any gamer too, especially those who tend to spend extended periods of time playing their favourite games. Personally, the Blue Storm could do much better in this area, but it is down to personal preference, so please take what I say with a pinch of salt. The first thing that stood out for me was the ear pads, they were made from a leathery material (not bothered checking if it was real or fake), and this is a big no no. They’re a much better option for noise cancelling, but for longer sessions they become irritable on me and I find my ears getting warm and then the pads become sweaty, it really isn’t a nice experience. But like I say, that’s my personal preference because I much prefer to have a mesh fabric that may not cancel noise out as well as the alternatives, but for comfort purposes, they’re a lot better.

The second improvement I’d make is the padding on top of the headband. Maybe some people don’t have big heads like me and the top of the band doesn’t touch your head because the ear cups clamp on nice and secure, but I don’t have that luxury. The top of the band is made of what I believe is a tough, yet soft-to-touch rubber, which is quite hard and after a while can feel like you’re trying to balance a heavy object on your head. Taking it off and readjusting it and ruffling up your hair does the trick usually, but soon after you’ll be repeating that process because of the irritation it causes. They do have an adjustable band so you can create more room to minimise these issues but I do like to rest it on my head so I still have the issue with comfort. I think the ideal replacement, which I’m not sure anyone actually does yet, would be a cooling gel pad cushion. It’s soft and when you’re at boiling point because you just can’t end that death streak, it’ll keep your head cool instead of causing steam to rise from your noggin. 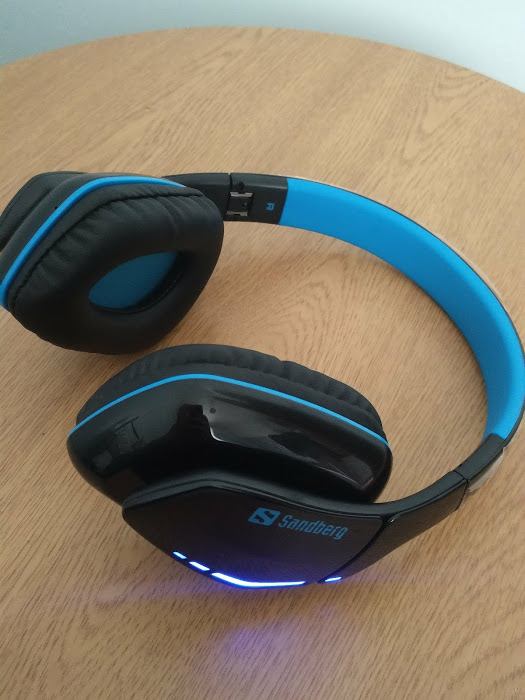 The headset itself is an adaption of an old Bluetooth Pro headset Sandberg used to make, just revamped with a fresh coat of paint. I only know this because they use the same perma-link on the website, unless they just reused the page and forgot to change the address, which is unlikely. The design isn’t anything new and exciting really, it’s a pretty standard foldable headset that comes in a gloss black and bright blue, a pairing that works really nicely. The shape of the ear cups is probably best described as a rhombus shape, which perfectly cups over even my big ears, and in fairness this is quite nice because other headsets have often been too small that they cause discomfort on your ear, or just far too big they become all loose and don’t sit right. Along the ack of the right ear piece you’ll find a whole host of buttons that operate the headset, including one that turns on some fancy looking LED lights, and the ports used to charge the headset and switch it into aux mode.

Looking good is only half the battle though, if it isn’t a quality product then what’s the point having spent all that time and effort on the design? Fortunately, the Sandberg belief is to create high quality goods that are easy to use and because of that, they’ve built a solid piece of kit when it comes to the Blue Storm headset. I’m not clumsy as such, but I do often leave things lying around and with three cats who love to try and break my stuff, a lot of things end up dropping on the floor, this includes this headset. Unlike some of the things my cats have destroyed which include mugs, my dinner and the casing of my laptop, the headset despite a couple of bumps, has few marks on it and the quality of it hasn’t dipped in the slightest. The materials, despite the smooth and sleek exterior that would make you believe the headset was delicate, are actually rather resiliant and will fight back against the cat menace that wants to destroy it.

In terms of the quality of some of the technical areas, it does better than I expected. There is only a small 380 mAh Li-polymer battery inside but it performs well, giving you up to 10 hours of playback. I’ve not quite reached that yet as I’ve only worn it for about 7 hours in total but I’m yet to get a low battery alert which is good.  The headset also does well with its wireless connectivity, which uses Bluetooth 4.1 to connect to your devices. You’ll need to keep hold of the button you use to switch it on to put it in pairing mode. Something I didn’t realise until I spent 10 minutes trying to connect the device with no success and resorted to reading the instructions (that’s some man points lost there). Once you are connected though, it will automatically pick up on your registered devices whenever it turns on which is good. The impressive part though was when I managed to leave my laptop upstairs, wear this around the house whilst tidying up and even go take the bins out to the street which must’ve been a good 8-9 metres away and even through a brick wall, it still connected flawlessly. 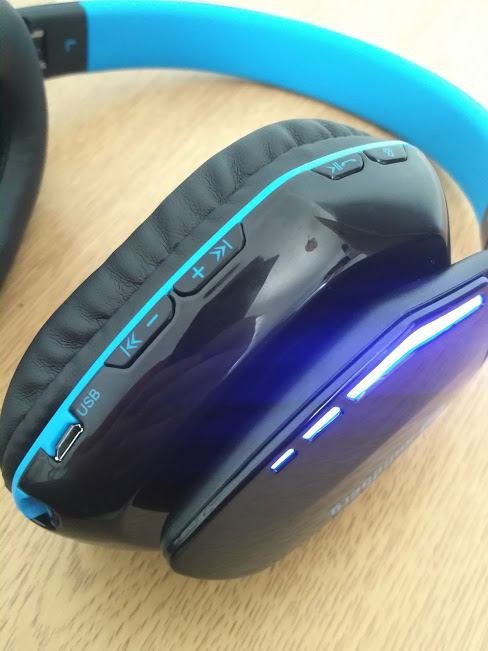 You can get a lot of standard headsets, both wired and wireless, around the same price as the Blue Storm, but you’d struggle to find one that is better quality than this in the same price range. You might find something that is to its equal, and it could potentially lose out but I’d be surprised if it was for anything other than comfort purposes. When you see that Sandberg offer a five year warranty with all of their equipment though, then to me that is a commitment to how much they believe in the quality of their product and shows what good value for money you’re getting.

The final score for the headset averages out at 4.25 across all the areas and I’d say that’s a pretty fair representation. In terms of audio and build quality, style, and value for money you’d be pushed to find much better available in the price range. However, just from a personal point of view it could use some work when it comes to the comfort of the headset, but what may please me may not please someone else and so there is no doubt that somebody, somewhere will disagree with me completely. 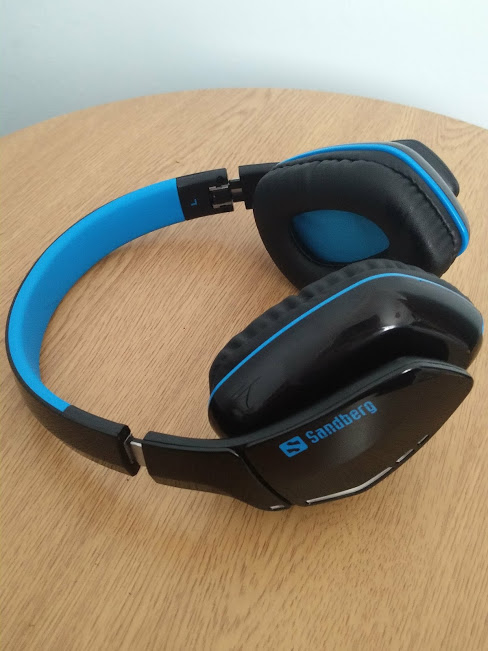 You can find the Sandberg Blue Storm wireless headset over on their website HERE along with many other Sandberg products.