Do you ever feel like the default controller that comes with your console isn’t enough? OR has yours broken? Maybe you were angry and definitely didn’t bounce it off the wall and it just fell apart… Well, when it comes to buying a new controller there are so many options, there are budget options that you know won’t cost much to replace if you, errrr, drop it against the TV with force. You can just buy a standard Dualshock 4 controller perhaps. Or there are the expensive, elite options, like a SCUF, or a Razer Raiju.

Well, today we’re taking a look at one of those elite options, in particular, the Nacon Revolution Unlimited Pro Controller, the one I have is the Call of Duty edition! Before I start, I just want to mention that if this design isn’t for you, Nacon actually has a few different versions of this controller which you can see below, they even showed off a WRC 9 edition on their Twitter not too long ago but unfortunately, I can’t find a store page for that version, and sadly, in my opinion, it is by far the nicest one they do! 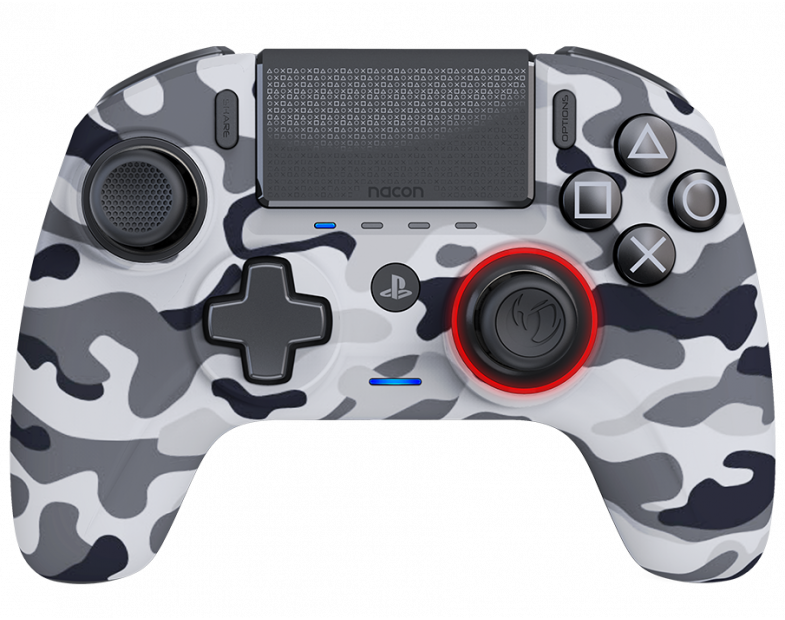 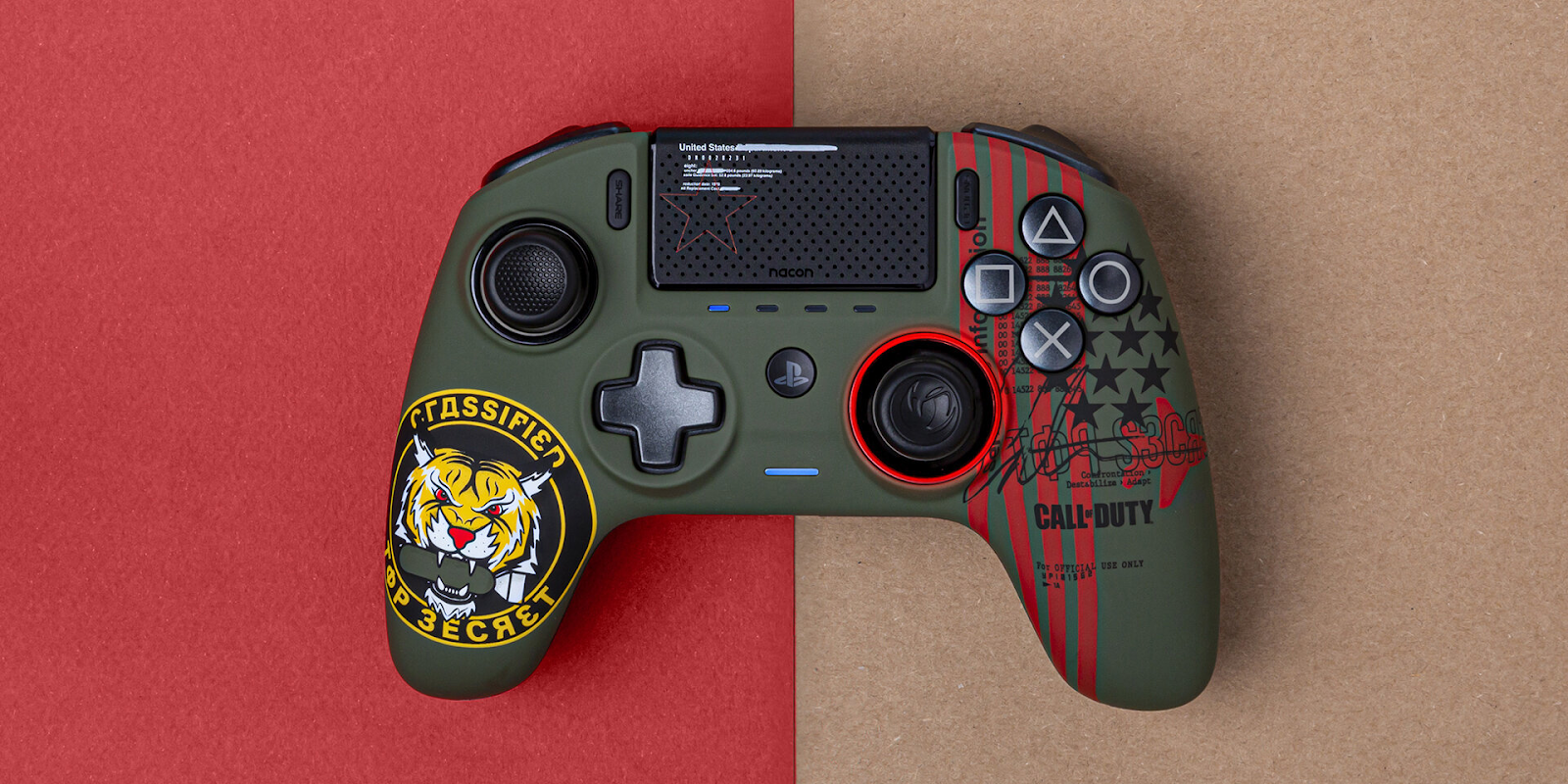 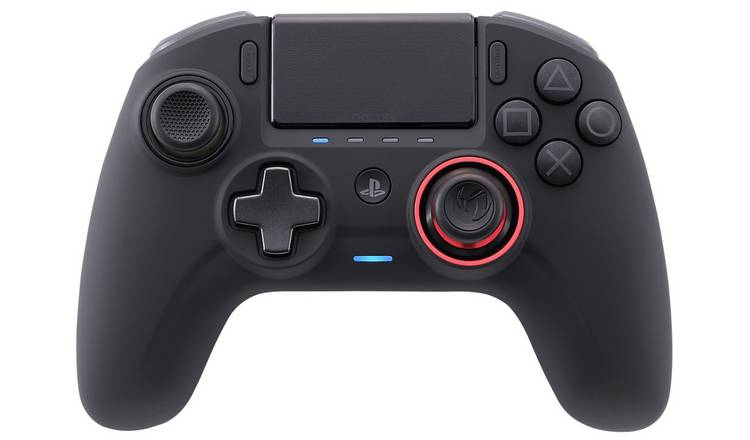 Seems appropriate that we start with the design then! The Nacon Revolution Unlimited Pro Controller, while it is a PlayStation 4 controller, features a standard Xbox controller layout, meaning it has the offset analogue sticks. This isn’t something I usually use as I tend to just default to a Dualshock 4 pretty much all the time, so it took a little bit of getting used to.

The Nacon Revolution Unlimited Pro Controller is coated in a grippy yet soft rubber material which removes any possibility that your hands will slip if your session is getting a little bit intense, it features 4 buttons on the back of the handholds, which are all programmable with the PC software, so you can map them to whatever button you want.

You may wonder how this is useful, but if you can train yourself to use it, it’s extremely helpful. As a quick example, say you use X as jump, while you’re moving and looking around using the analogue sticks, if you map one of the buttons on the back to X, you can then jump without having to take your thumb off the analogue stick, neat right?

Speaking of the analogue sticks, I’d describe these as somewhat tight, not too tight that it’s impossible to use, but just different enough from what you’re probably used to that it will take a little bit of adjusting. However, once it clicks you’ll find your shots in-game a little more accurate as you’re less likely to over/undershoot when it’s that little bit harder to move around.

Moving back over to the rear side, you’ll notice there are two switches and a few more buttons I haven’t mentioned. The middle switch is used to swap between wired & bluetooth mode, yes this controller can also be used wirelessly with the included bluetooth adapter or wired with the 3 meter cable.

The second switch you can see will allow you to swap between profiles. One being specifically for PC, the other 2 being console focused. Number 1 being PS4 standard and number 2 being PS4 advanced. In the advanced and PC modes you’re able to use specific profiles created with the software I mentioned previously, letting you map buttons, change the analogue stick response curve and dead zones, also the trigger sensitivity.

It took a little bit of fiddling to get into using the Nacon Revolution Unlimited Pro Controller software properly but once you’re used to that it’s great and you can make this controller play exactly how you want it. Lastly, there are volume and mic buttons to use with the built-in headset jack.

In the box you’ll find a hard shell carrying case for your controller, in appropriate camo colours, the 3m braided cable and bluetooth adapters I mentioned previously and a little plastic case. This case features weights which you can add behind the covers on the palm rests, while you’d think this only really makes sense in a mouse, I found adding a bit more weight to make the controller more comfortable to hold.

You’ll also find different sized analogue stick shafts, these are used to give you more or less movement on your sticks, which can help affect your accuracy, also a different set of stick heads. You’ve got convex or concave to choose from! Lastly, a nice branded cleaning cloth! That’s about it for the design, but what’s she like to use?

How does it handle?

As I mentioned, I tend to use a Dualshock 4 controller for pretty much everything and, while I do use a Switch Pro Controller which has the same layout, I feel like the Nacon Revolution Unlimited Pro Controller was a little beefier so when I first started using it, I found myself occasionally not pushing the left stick all the way forward.

So as an example, when I was playing Rocket League and front flipping on my rotations, I was finding that because I wasn’t holding it all the way up without realising, I’d just double jump forwards instead of flipping which would kill all my momentum. This was just a personal fight I had at first and now I’ve been using it for a while that’s gone, so if YOU are like me and have only used a Dualshock 4 for years at this point, it may take a little adjusting, but once you do, you’ll appreciate the hell out of this.

Another bit of adjusting I had to do was getting used to the extra buttons, I now find them SO helpful but at first, I was panic squeezing my controller when getting shot from behind in Apex Legends and I’d find my character jumping all over the place, I can only imagine how it looked to the people who were flanking me. I mentioned I added some weight to the controller, while this controller feels very premium as it is, adding those weights really changed my experience for the better, your mileage for this may vary but I love the hefty weight it’s got now.

The Nacon Revolution Unlimited Pro Controller shoulder buttons are so satisfying, L1 & R1 are very clicky and responsive and after some messing around I got my L2 & R2 sensitivity to what I’d consider my perfect spot, I was able to rapid-fire my Hemlock single shot without having to travel too far, bouncing on that sweet spot just right.

I had a little bit of a mess on trying to get some games to recognise the Nacon Revolution Unlimited Pro Controller when I was using it wired with my PC, although I feel like that MAY be down to Steam and their new controller software beta since Steam does have native support for the Dualshock 4. Once I’d got past this little stumbling block though I was well away, so this MAY not be an issue for you and I might just have got a little unlucky with this new software they have tied into big picture mode.

Anyway, after a few days of using it, I had adjusted to using a new controller and my experience since then has been great. The added weight never makes my hands or wrists feel fatigued during long sessions and even if it did I have the option to remove it to make it a little lighter, the buttons are very responsive and feel great, analogue sticks are tight and precise.

My ONLY quarrel with the way it plays is that the D-Pad isn’t the best I’ve ever used. It felt a little mushy sometimes and I found myself mis-clicking the wrong direction, although that part could be tied in with learning to use a new controller layout. Either way, I think that realistically the only part of the Nacon Revolution Unlimited Pro Controller they could actually improve is the D-Pad.

So what’s the score? If you’re in the market for a PREMIUM controller, the Nacon Revolution Unlimited Pro Controller may be the one for you, there are plenty to choose from so doing a little bit of research into each individual unit will help you net the product that’s right for your needs. Coming in at a whopping €179.90 (or around £165) you’re looking at dropping a lot of money on this thing, is it priced a little high? Possibly, but does it FEEL like a £165 controller? Honestly, yeah.

The Nacon Revolution Unlimited Pro Controller is very premium feeling and while this personally isn’t my favourite design they do, I can absolutely see why people would love this particular model, if I was to buy one myself I’d probably go for the default version unless I could find a store page for the WRC 9 model I mentioned previously.

As I always say, depending on your needs, in times like we’re currently in where people don’t have disposable income in abundance like they perhaps used to do, it may be worth having a look around. Possibly pick one up second hand or keep an eye out for it on sale, you can make your money go a lot further this way, but if you’re lucky enough to have a little disposable income, even at £165 I think I could recommend this.

Some of you may think that’s a little outrageous for a controller and I’d be inclined to agree however when you compare the Nacon Revolution Unlimited Pro Controller to the competition it seems about right, in a lot of cases better, the Razer Raiju is £199 on Amazon.co.uk and SCUF controllers START at like £125 but when you actually start to customise it and add the features you would WANT when buying something like this, you’re looking at £175 or more!

But honestly the results I’ve seen after rocking this thing for a little while and getting used to using those extra buttons would make this worth the investment and, if you’re looking at maybe taking your game to the next level, if you’re a pro gamer who wants something more premium or if you’re just looking to take that last step up the ranks, maybe this could be your weapon of choice?

This thing is a solid 9.5/10, I feel like if they changed the D-Pad on the Nacon Revolution Unlimited Pro Controller to something that felt a little more responsive I would 100% change this to a 10/10, you may like the D-Pad as it is, but for me, it’s the one flaw this thing has got.

The Nacon Revolution Unlimited Pro Controller: CoD Edition is available now, and you can find it on the official website HERE. Check out more of our hardware reviews by clicking HERE.

MMORPG Elyon Launches New Website Ahead of its Korean Launch

How esports has adapted and where is it going?

Gloomhaven: Jaws of the Lion review

Sorry, we don’t have any spare to give out.