Having just reviewed Mantis Burn Racing by VooFoo Studios, it’s time to get our hands on their BATTLE CARS DLC.

Now with most racing games, DLC brings little more than a few new cars, maybe a handful of new tracks and really, that’s about it. However, Mantis Burn Racing is no ordinary racing game, so why would you expect any less from one of its expansions? BATTLE CARS not only introduces new vehicles to the game, it completely changes the game’s dynamic from being an ordinary top-down racer to becoming a frenzied free-for-all.

The main aim of the game remains the same,  finish in 1st place. The only issue is it’s not so simple anymore because whilst being quick is great, if you can’t outrun a stream of bullets then you’re pretty much buggered. You can, however, try and defend yourself by dropping mines on those who would want to bring harm to you. Do enough damage to your opponents, or if they manage to dish out enough to you, then KABOOM! people gonna die. It’s ok though as in a matter of seconds you’ll respawn back on the track albeit further behind the opposition than you’d want to be. 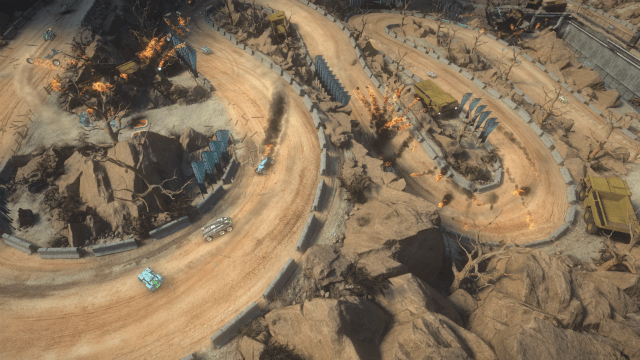 The weapons usually activate part way around the first lap and once activated you’ve unlimited ammo, although your gun can overheat which will trigger a cooldown period, during which, you’ve no means at your disposal to attack other players. To stop you from being obliterated into tiny shards of metal, you’ll see repair pads around the track (not that many though), drive over any of these and it’ll give you a nice little boost to your armour. It would be nice to see this changed slightly where you actually pick weapons up by running over plates as well to add a tactical edge to the game, but the whole free-for-all idea works well too.

The only real downside I do have for BATTLE CARS is the same kind of issue I had with the main game, and that is a lack of customisation. Yeah, it’s nice to change the colour of your cars and their boost, but if you could change your weapons as well then it adds a whole new edge to the expansion. So much could be done like adding new primary weapons such as rockets or flamethrowers. You can even swap your secondary mine weapon with alternative distractions like smoke clouds or oil slicks to help reduce visibility or make your opponent lose control. I’d even accept buying different cars with different weapons, but there are only 3 available with the DLC, which is another shame, but for £1.99 you can’t grumble about too much.

Overall the BATTLE CARS DLC is an excellent addition to Mantis Burn Racing which came out around about a year ago (that’s older than FULLSYNC). The expansion really puts some flesh on the bones of the core game, not only adding three new cars and an additional season but completely changing the game from your typical racing title to an all-out brawl for 1st place. It’s by no means perfect with some minor frustrations, the main one being a lack of customisation which carries over from the main Mantis Burn Racing title but otherwise, there is a whole lot of fun to be had with this DLC and if you do have the core game, it’s worth getting.