Yesterday I had to go to the hospital for a small operation. It wasn’t anything major, just a case of having something removed. But, whilst I was there, it got me thinking about Theme Hospital.

For those of you who are old enough to remember this game, you’ll no doubt be having flashbacks to curing people who suffer from invisibility, mopping up sick from the hospital floors and laying out your building into organised chaos. There will, however, be a whole bunch of you who probably have no idea what I’m on about, so firstly, thanks for making me feel old. Secondly, stop whatever you’re doing and go check it out. After reading this of course. 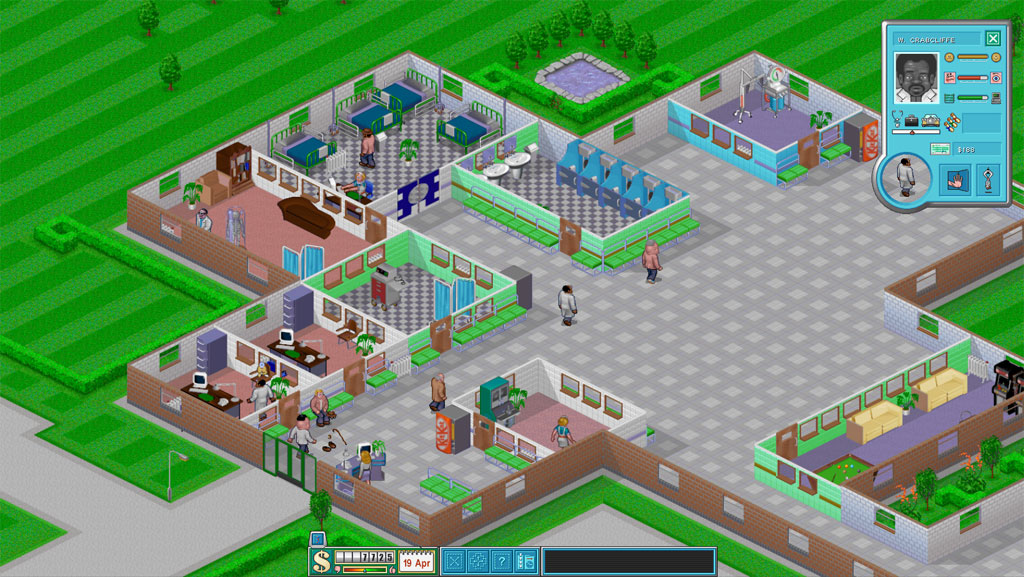 Developed by Bullfrog Productions for PC in 1997, Theme Hospital was a business simulation game in which you have to build and run your very own private hospital. From hiring staff, buying the latest equipment, and trying to cope with medical epidemics like the flu, you had control of absolutely everything except for the patients. But it wasn’t as boring or as serious as it sounds, with the game bringing a comical side to gameplay meaning you’d be treating people for bizarre illnesses such as Bloaty Head syndrome in which they’d just have overly large noggins, or King Complex which forced those diagnosed to impersonate Elvis, badly.

Patients would pay you for your services which would include diagnosis and treatment, and you’d then use your revenue to upgrade equipment, open new departments and so on, as any good business would do. There are times though when patients will argue about pay, and you can choose to evict them leaving them to suffer from their illnesses or treat them anyway. This is when you begin to notice that the sense of humour isn’t as light as some of the illnesses may suggest. Especially when it lets you go through with treating a patient before a diagnosis is complete, which can lead to their death. Because, why the hell not?! 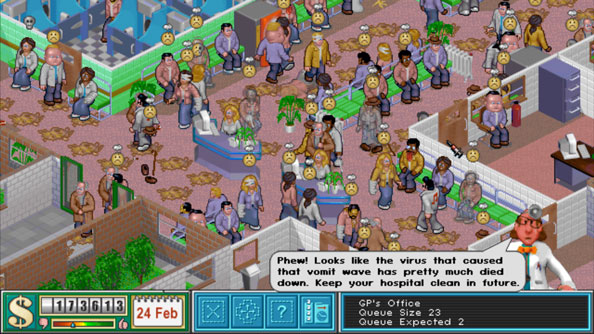 The game ended up being a huge hit, selling four million copies worldwide. It even did that well, that the year following release Krisalis Software ported the game to PlayStation. There was also a version in development for the Sega Saturn, but much like you do when getting out of the bath, the plug was pulled and the dreams and aspirations of the title hitting that platform washed away down the drain. Still, the popularity of the game never really waivered and due to high demand, it began being re-released, first in Europe on PlayStation in 2008, followed by Japan in 2009, America in 2010 and then on PC with GOG.com in 2012, and on Origin in 2015.

Fortunately for me, the hospital I had my operation in was not run as badly as some of the ones I operated in Theme Hospital back in the day. But sadly the only reason I got to experience such nice surroundings is that the NHS is in crisis and so overloaded and understaffed that they couldn’t see me, and as a result, I was outsourced to a private establishment. Great for me on the day but worrying signs for the country as a whole. But who knows, maybe the Tory Government will see this and could learn a thing or two about how crap of a job they’re doing. Rant over!

I hope you enjoyed being taken back in time with me today, and we’ll see you again next week as we take another step back in time to look at some classic games.