The joy of movement: VALLEY review

Giant statues, sprawling vistas and dark government facilities race by as you sprint down hills and leap across yawning chasms. Forgotten corners and ancient ruins beckon, teeming with secrets and danger, but as momentum drives you forward at an impossible speed, they fall by the wayside. One moment you will be bouncing across rooftops like a superhero, the next doing battle with the very balance of life and death itself, and it is this intoxicating combination of speed and the forces of nature that define Valley.

On an adventure to the Rocky Mountains to discover an ancient artifact capable of untold destruction, you would be forgiven for thinking this would be an indie answer to Tomb Raider or Uncharted, but this game has more in common with Portal, although it may not immediately seem as such. The opening moments see you crash a canoe into a cave, and after wandering through, taking in the scenery, and contemplating the task ahead, the titular valley opens up before you. It is lush and inviting, standing still in time, but before long you discover it’s not as pristine as it once seemed. You stumble upon the LEAF suit, which is introduced with a clip that has lashings of Aperture Science or Ryan Industries, and suddenly your gentle meander through the hills becomes something else entirely. The suit, left behind by the shady government organisation of the week, lets you run faster and jump higher, but by far the most ominous feature is the Godhand module, which grants your character immortality and the power to give and take life. This is how Valley, a game packed with deadly drops, coursing rapids and deadly enemies handles your character’s health. Every time you die, the suit brings you back, with the caveat of taking out a few trees and deers to do so. 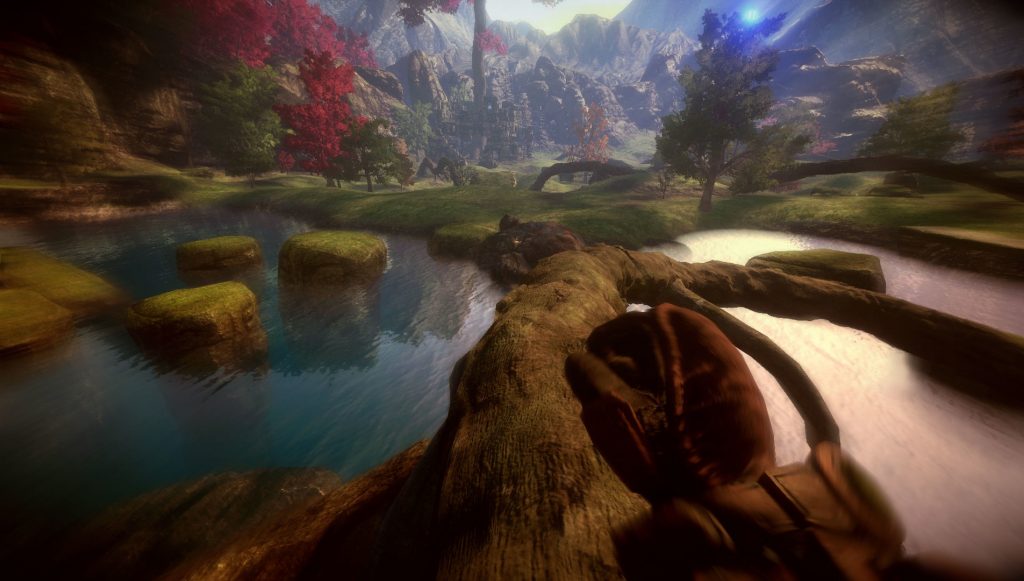 There is combat; with pulsing swarms of supernatural mosquitos, and shuddering wraiths borne of the Valley’s peculiar energies, and your encounters with them are as much a part of the nonstop hurtle forward as the environment itself. Fights are rapid exchanges of energy as you attempt to sate the agitated phantoms with the life force they so crave. They are always beautiful, as much of the game is – purple and green energy flashing back and forth as you weave and leap from vantage points, but they can sometimes feel a little bit unnecessary, artificial barriers in place to stop you from just racing to the end. Instead of a ramp-up in aesthetically pleasing but hollow combat, it would have been great to see the environmental hazards present some further complications combined with the upgrades you receive as you play.

The upgrades are handed out like breadcrumbs – just as you get comfortable with the way you navigate the world, it adds another layer, and this keeps things fresh throughout. The simple double jump comes first, and that, alongside the wall-walking module, see the most use. The others are more or less reserved for a big set piece sequence that specifically revolves around them, and while they’re thrilling, they never really come together with the rest of the game. One moment sees you sprinting at insane speeds through an underground tram line, complete with death-defying leaps accompanied by soundtracks that ebb and swell at perfect moments, the next you’re skipping across lakes like a stone thrown by a Norse god. Valley becomes poetry itself in these moments, a brilliantly executed sense of speed and power urging you forward to the game’s next dark corridor or verdant vista. It is packed full of moments like these, and I find myself struggling to criticise it on those terms, but I find my one major complaint being that the complexity does not come from the environments and abilities, but from the enemy encounters peppered throughout. I’m loathe to make comparisons between games but the easiest way to explain it would be to liken it to puzzling your way through Portal only to discover a massive room full of turrets at the end you had to painstakingly wander through. It’s an unnecessary obstacle, and I personally would have rather seen the various abilities come together in unexpected ways to offer up a challenge.

This doesn’t impact the game’s overall experience – the two hours it took me to blast through the campaign were far more enjoyable than the 20+ hours I’ve spent on other games recently. I would recommend it in a heartbeat to anybody, and the best way to go into it is with zero expectations. Just let the world and the story unfold around you, as it increases in pace from gentle exploration to apocalypse prevention, and take some time to explore the incredible locales afterwards. There’s definitely replay value, with a ton of locked doors and hidden challenges you’ll miss the first time around, and I find myself chasing the high of the first race along the hyperspeed tracks by revisiting that level every now and then. It’s never going to be as awesome – used to its actual definition in this case – as the first time, but I’ll never forget my first playthrough, wide awake at 3 in the morning, held captive by a game that thrills and enchants in equal measure.

Valley was developed by Blue Isle Studios with Unity. You can buy it on Steam right here.