The Nintendo Switch has gathered much more respect than its unfortunate predecessor, the Wii U. In fact, the Wii U was dumped by a lot of people (including developers) almost immediately, while the Switch showed a lot of promise and enabled many of those people to come back and try to work with Nintendo again. Taking an example with EA, FIFA stopped shipping on the Wii U console, but as soon as the Switch was released, it received FIFA18, just like the big guys in the industry. Classic EA though stripped some of the more fun features of the game, while leaving it at full price. My point is, the Switch can be considered as one of the big consoles in the industry, with games ready to compete with other titles on other platforms coming out with a certain frequency the Wii U would kill to have.

One type of game which Nintendo will always feature on their platforms is indie titles. These games come from smaller studios, who do not have the massive budget for equipment and resources to compete with large developers, yet they want to enter the industry with something creative of their own. One such developer, VooFoo studios, is an example of how indies can always find a home at Nintendo. Their latest game, Mantis Burn Racing, was previously already released on PS4, PC and Xbox last year, but the game has now been brought over to Switch, with all the latest improvements and additions to make what was a good game even better.

I had not played a top-down racer for quite a while before Mantis Burn Racing, to be honest, the last one probably being in my primary school days or a little after that, when the whole class would finish the IT lesson as fast as possible, so that our teacher, with 15 minutes of boredom in his sights, would decide to let us browse to Miniclip or some other mini-games website to pass the last quarter of an hour, which was probably the best 15 minutes of the day in fairness. Mantis Burn Racing brings all the excitement of a top-down mini-game racer but as a much more polished and refined game, with career modes and multiplayer making the experience a much bigger and wider game than those one-offs.

Contrary to the trend of adding a somewhat cringe-worthy love story or any type of vengeance/redemption stuff to the plot, Mantis  Burn Racing keeps the career mode clean, just making you try your damndest to finish first each and every single time, which is cool, as an indie studio, sans offense, you should focus on the most basic gameplay issues instead of conjuring this intricate “masterpiece” which would result in weak gameplay. On the other hand, VooFoo has shown that they did do their work right, as the gameplay is very solid and responsive, and feels fair. Career mode also begins very easily, so you don’t have excuses for finishing second or below. Finishing first lets you upgrade your vehicle which will let you take on better opponents and tougher races and after the first season the difficulty begins ramping up, so you better invest as much moolah as you can afford into your racer, or you’ll be left eating the dust. 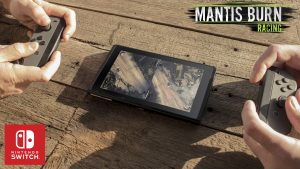 As this is an upgrade or a port as some may say, the Switch version has been optimised to run at 60FPS anywhere, which is kept quite satisfactorily throughout the game. Local multiplayer splits the frames to 30, but we’d rather have split screen at 30 instead of nothing at 60. Am I right or am I right?! I mean, the Switch is a perfect place for party games, so detracting such a feature, which was in other versions of this game, would have been criminal.

Mantis Burn Racing has brought over to Nintendo the joys which it has shared last year with Sony and Microsoft. The game is solid, gameplay is fair and it will keep anyone occupied for quite some time. If the top-down racer genre felt a bit stale, it definitely is refreshed now with this release. Hopefully, this will stir the air and bring in more titles and competition!