As much as I love the Nintendo Switch I probably play it a hell of a lot less than I do my other consoles. It’s not that it isn’t as good as the others, but since its release lacked many big games and the ones we’re all dying to play *cough* Smash *cough* are not being released for a while, we’re stuck with much smaller titles to try and fill the void from big release to big release. And one such game that is trying fill the void is Epiphany Games’ Tiny Troopers: Joint Ops XL.

This twin-stick arcade shooter puts you in command of a small troop of soldiers in the middle of a war zone. Making the most of a multitude of weapons and hiring a couple special ops soldiers with special classes such as Medics, you have to defeat numerous enemies dotted around the map whilst also tackling other objectives such as destroying all buildings and enemy vehicles. Along the way, you can collect medals, dog tags, Intel and more. This not only increases your score and earnings on each level so you can unlock things such as new weapons and soldiers, but it also gives you a better chance to revive any soldiers who were KIA. 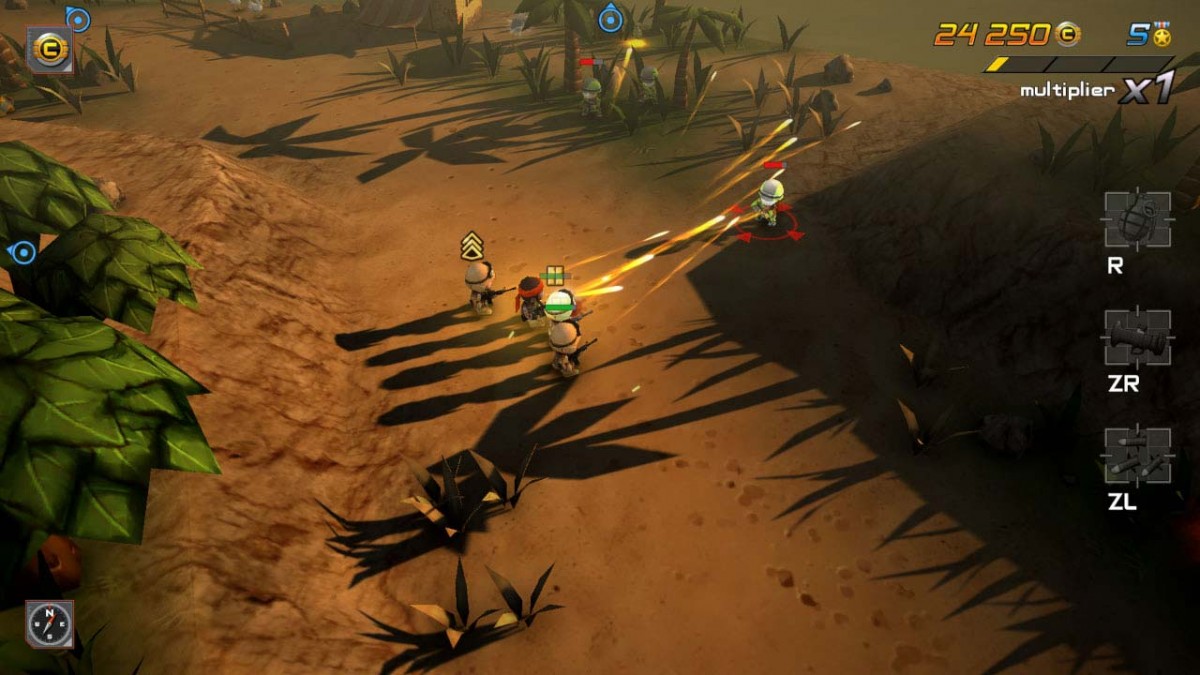 As you make your way through the game, soldiers who don’t die can be upgraded and will rank up, making them stronger and tougher. But due to the feel of the game being extremely mobile like, it kind of feels like these payments are microtransactions that you need to pay for in order to progress. The problem is they aren’t microtransactions because all the in-game currency is just that, in the game, and so you find yourself repeating missions in order to save up to buy the likes of Machine Gunners or the Elite Delta Force in order to bolster your forces to get through the trickier missions the game has to offer.

Besides the normal missions, of which there are aplenty, Tiny Troopers also jumps onto the zombie bandwagon following suit with games like Call of Duty. Make your way around the abandoned streets as you watch the undead rise from the ground and come charging towards you longing to sink their rotting teeth into your tasty flesh. Whilst a nice feature that offers a fair amount of extra content, it doesn’t pose a real challenge as taking your time and walking backwards as you spray waves of bullets into the festering corpses will easily dispatch of the oncoming enemies. And when you do feel like you may be getting overwhelmed, just chuck in a grenade and nine times out of ten you’ll clear the threat. 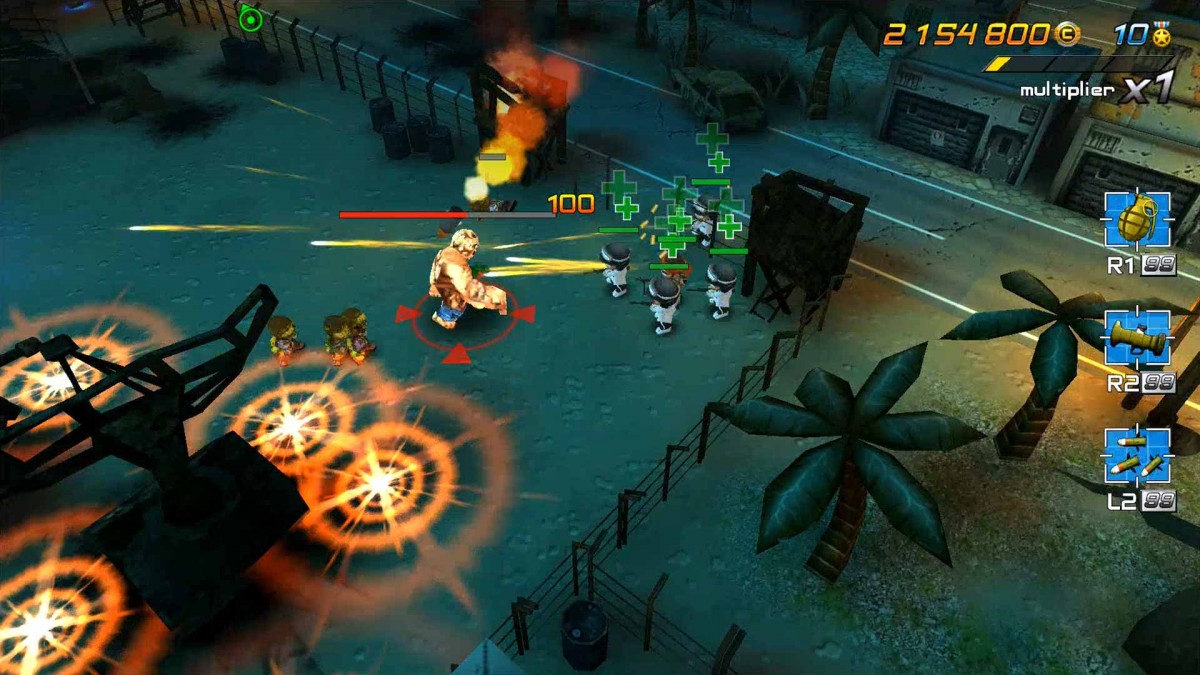 Besides the gameplay feeling very mobile-like as mentioned above, it does play rather well on the switch and that’s mainly down to the portability of the console and its tablet-like design. The only thing that makes it more than a mobile experience though is the fact that you have the Joy Cons at your disposal and aren’t relying on virtual controls on the screen to move and shoot. This makes controlling your troops a hell of a lot easier, using the left stick to move and the right to aim where you shoot. And in all fairness, I found the controls were very responsive compared to some twin-stick shooters where a slight movement can cause you to start firing in the complete opposite direction.

Moving onto the graphical side of things, the caricature design is a nice change from your typical realistic style war based games. I would say that this is another area where it actually feels more like a console game, but if I’m honest it is something you’d expect of a mobile game because games of this style are usually less resource intensive. Plus you get some really good looking games on mobile nowadays anyway with the likes of Fortnite and PUBG even porting over rather well. Still, the artwork definitely is one of the game’s main positives. 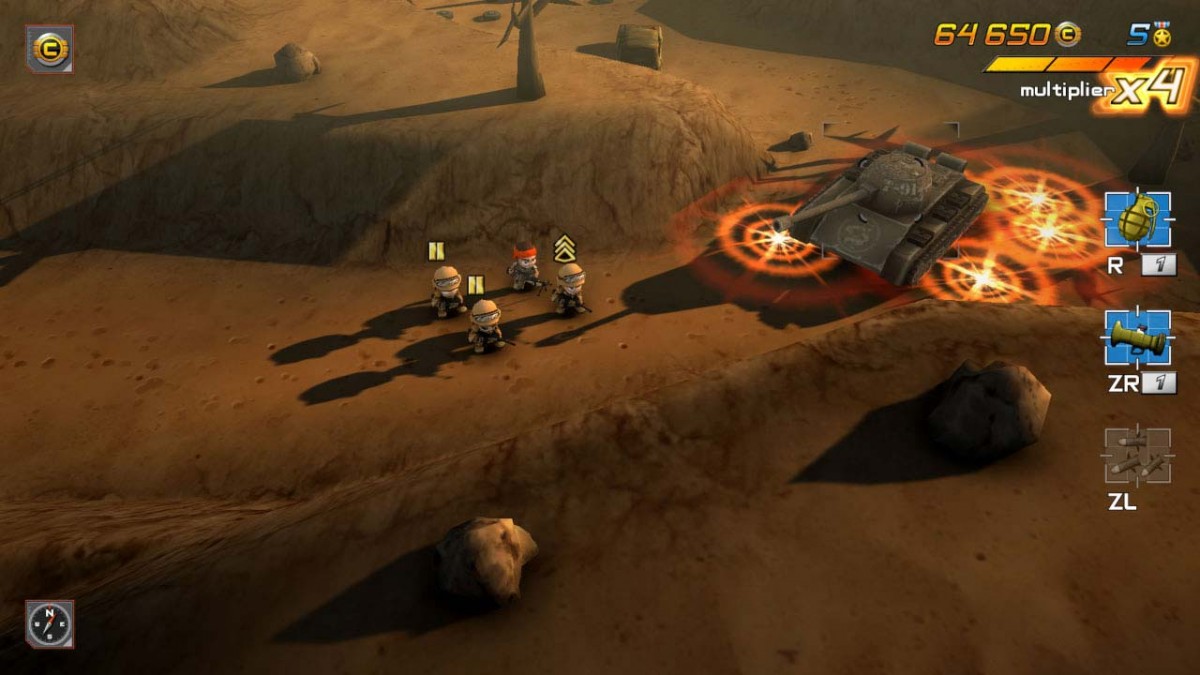 Tiny Troopers: Joint Ops XL isn’t necessarily a bad game, but it does fail to impress due to its repetitive nature. Despite perfectly suiting the portability of the Nintendo Switch, it does feel too much like a mobile gaming experience you’d play on a phone or tablet. That said, it does mean that it is a game you can pick up and play off the cuff if you’ve not a lot of time on your hands, like waiting for the other half to get out of the shower, or whilst you go to drop the kids off at the pool. It also offers a fair amount of content, but again, you do find yourself repeating a lot of missions and exercises in order to earn points to unlock new items and improve existing ones, making it feel very much like a pay to progress experience due to the mobile feel.

Tiny Troopers: Joint Ops XL for the Switch is developed by Epiphany Games and published by Wired Productions. It’s also available on PS Vita, PS3, PS4 and Xbox One.