Shout it out: Skyrim VR review

The moment I opened my eyes on the cart trundling me towards my unfortunate execution in Helgen was surreal – hearing my prisoner buddies bicker about horses and politics for the thousandth time, an experience that should have been familiar with a suddenly changed perspective. Ralof continues his rambling about mead with juniper berries but I’m already somehow lost, gazing around a world I’ve already spent hundreds of hours in as if it were new again.

Skyrim is here in its entirety – every distant foreboding mountain, angry dragon and horrible child. This also includes graphics that are showing their age to say the least in some areas, but it’s hard to worry about that too much when the score starts rising around you and you remember the sheer amount of stuff to do on the horizon. Before that Imperial jerk in the Riverwood Trader could tell me how to find the bandits that had stolen his precious claw, I was already sprinting towards the barrow with a song in my heart and a spell in my hand, torching wolves and thieves alike (with the odd innocent bunny or fox caught in the crossfire). I didn’t care about the odd texture pop in my peripheral vision, chiefly because I was a goddamn spellsword on a quest and I knew before the end of the next hour I’d be Fus’ing critters off of clifftops and stabbing dragons in the face. There are some valid arguments for the importance of visual fidelity in VR – sure, games with tight graphics can be immersive as hell, but I’d say at this point in time atmosphere and detail can do just as good a job, which are things Skyrim has always had in spades.

There’s a full complement of VR options that can be tweaked to provide the comfort level you need. Locomotion is direct or teleportation, the latter feeling a bit limited considering the size of the world, but walking around using the analogue sticks on the Rift Touch controllers is smooth. Jumping, turning and sneaking are all done by manipulating the right stick, and you can adjust the FOV comfort filter to eliminate any motion sickness concerns. For me this created a really disconcerting binocular effect that impacted immersion too much to continue with so I opted to remove it and deal with the mild nausea, but it can be tuned to a fine point if you need it. They haven’t skimped at all, and if you’ve got a lower-end VR rig you’ll still be able to have a great time regardless of graphical grunt. If you need the latest graphics to have a good time, maybe this old yet legendary title won’t tick all the boxes – it still offers up a complete and enjoyably full experience. Ignore the main quest to blacksmith, cook or thieve your way through hours upon hours of content, soaking in dimly lit sewers and snowy landscapes along the way. It can be an epic tale of prophecies and dragons, or a fantasy life simulator, and being able to walk either of those paths in virtual reality is something we’re in dire need of. The fact that it comes in a package many of us have already played for hundreds of hours might dissuade some, and that is an entirely fair point of view. I’ve sunk a sizeable portion of my life into this game, and now when I load it up on Steam, I tend to get burned out on it pretty quickly without a hefty complement of mods to change it up.

Skyrim VR has changed that, and not in any sort of novelty way. It feels like a chance to see it all anew, and I’m sure by the time I’ve made my way through killing Alduin, wiping out the vampires, building myself a nice little house and taking down the first Dragonborn there are going to be a massive influx of mods that offer the freedom to make this huge VR sandbox as weird and wonderful as my original Steam saves. It’s not just the already hearty core experience, it’s what the dedicated community is going to be able to create with it. Whole new questlines, medieval dating sims – who’s going to turn down the opportunity to kill a dragon with a lightsaber? Mods are a vital part of the experience, and have the potential to make little fixes here and there to either streamline it or make it as silly as you could possibly ever need.

A lot of recommendations have been flying about regarding using a shield and sword build to get the most out of Skyrim VR, but I found archery and spell-slinging to be much more satisfying. Melee weapons suffer from a sense of weightlessness, floating objects that struggle to contact in a satisfying way with enemies, and I’m aware that this is something I mention every single time it comes up, but until a way to make your weapons feel a bit more present in the world itself emerges, it’s going to be a problem. Short of strapping weights to your wrists – which is another dimension of complicated setup VR doesn’t need right now – melee combat is always going to play second fiddle to blasting away with futuristic pistols or shooting flames out of your hands. Shields and blades are serviceable but for the most part lack that sense of impact, chipping away at immersion in slow chunks. Go mage – burn it all down and loot the ashes.

The most unwieldy part of Skyrim VR is not the strangely weightless greatswords and axes you can wiggle about as if they were inflatable, but the menu, which is here in all its essential but unpleasant clunkiness. They’ve clearly done their best to make the inventory as painless as possible, but it just doesn’t do the job, and goes to show that even VR doesn’t make inventory management a good time. Games built for the platform subvert it by having you naturally pull weapons from your waist, tucking healing items behind your back, but obviously porting games practically from another era of technology comes with a few hiccups like this. Without weapons drawn, your presence in the world is reflected by your high-tech floating VR controllers, which is a jarring choice – possibly to help you navigate a menu-heavy game, but there was surely a more elegant, form fitting solution somewhere that got scrapped in favour of the easy choice. Again, both of these problems will probably be rectified by mods, but the fact that someone else is going to come in and fix something that could have been dealt with in development itself doesn’t excuse them. Give me floating hands, regardless of poly count, they’re going to look better than pointing my slick Touch control at a chest of ancient treasures surrounded by flickering torches and bloodied stone. 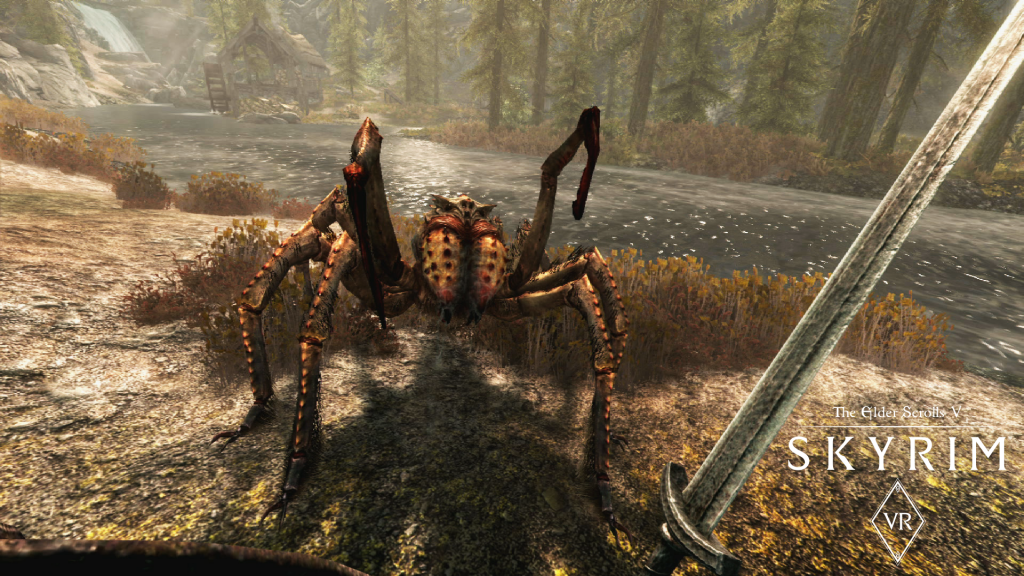 The majority of it works spectacularly. Given that most of your time is spent gazing over beautiful vistas or fighting massive lizards the sense of scale is intoxicating, but it’s in the minutiae that it falls short, freezing time to drink potions or equip new weapons is a drag, floating modern day controllers contrasting sharply with mysterious dungeons and frozen mountains. I would have loved an iteration of Skyrim where your potions are relegated to a limited pouch at your waist, and you can only carry a realistic amount of weaponry, but unfortunately they would have had to gut so much of the game to implement that it wouldn’t have been practical. Given that you can still pick up everything that isn’t nailed down, the only way to handle it is with an old-fashioned inventory. These limitations hold it back from extraordinary potential, and we won’t see the promise offered here come to full fruition for quite some time.

If you don’t like Skyrim, this release isn’t going to change your mind, but if you’re fatigued by the “Bethesda release Skyrim on everything!” meme I would encourage you to take the plunge on this one. Despite the game’s age it works beautifully and going back to the flatscreen classic after fifteen hours in this one just doesn’t feel the same. Skyrim VR is -hopefully- an important precursor to the next Elder Scrolls title being built alongside the technology instead of adapted to it, and when that day comes, I’m quitting my day job and moving to Tamriel.

Skyrim VR is available on PS4 and PC now. You can check it out on Steam here. Check out our other games reviews here.