From Dusk til Dawn…of War – Part 1

Well, this was supposed to a review of Dawn of War 3 but I decided to go back to its roots because I absolutely love this game series, its history and characters. This article will be released in parts and it will cover all the plots of the games before moving on to the review of Dawn of War 3, so without further ado let’s get the pain train rolling.

The series starts off on the planet of Tartarus, which is under siege by a huge Ork invasion force. Colonel Brom of 37th Tartarus Planetary Defence Force (PDF), is leading a valiant but shrinking defence. This is where we get our first meeting with Gabriel Angelos, who is Captain of the 3rd Company of Blood Ravens. Both forces manage to defeat the large Ork force surrounding the 37th Tartarus PDF. 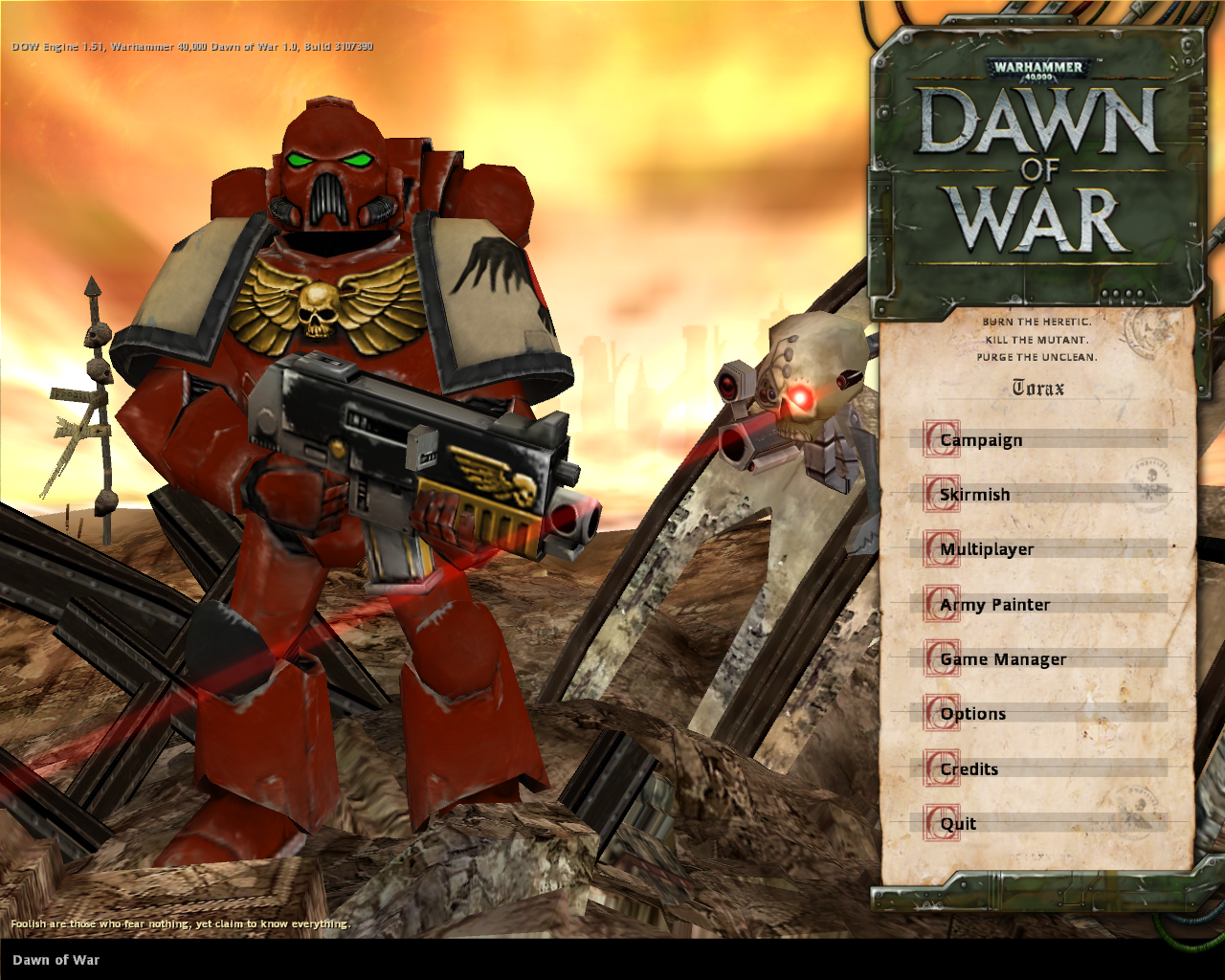 Gabriel is later joined by his battle brother, Librarian Isador Akios. Isador is aware that Gabriel is troubled by the event that occurred on the Blood Ravens homeworld of Cyrene, Gabriel asks for it to not be mentioned again, as Cyrene was his responsibility. After the 3rd Company defeat the Orks invasion force, Blood Raven scouts discover that forces of Chaos are operating on the planet.

Inquisitor Mordecai Toth brings tidings of bad news and orders the mass evacuation of the planet, as a warp storm is bound for the planet within 3 days. Gabriel refuses as he has a suspicion that there’s a possible threat of Chaos, to which Mordecai chastises him. Upon further investigation, it’s discovered that Eldar forces are operating on the planet as well as the revelation of an altar dedicated to the ruinous powers. 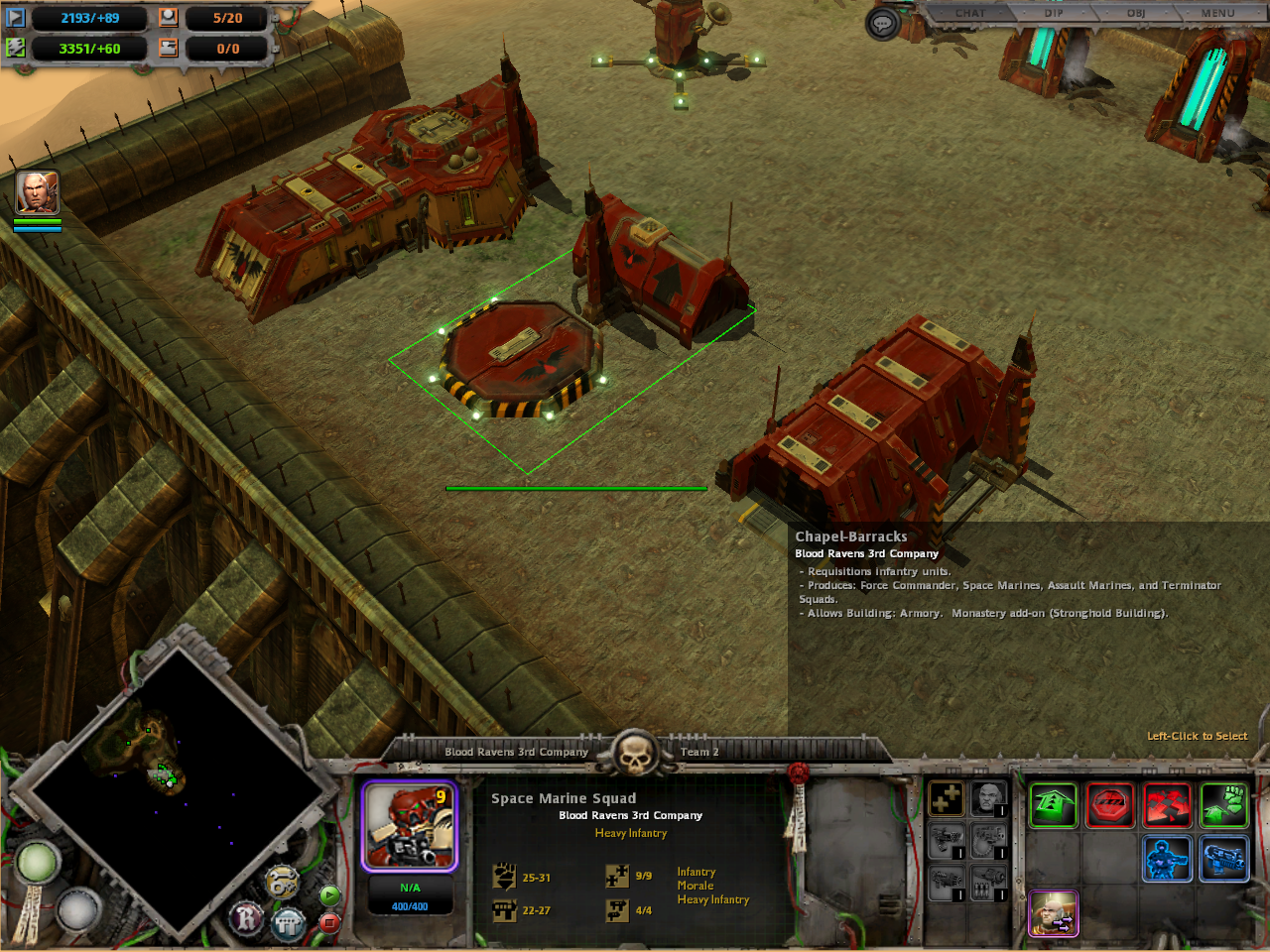 In the abandoned city of Loovre Marr, a city-wide battle ensues between the 3rd Company and Eldar forces, unbeknownst to them, they’re being observed by Alpha Legion forces. With the Eldar forces almost wiped out, Farseer Macha pleads with Gabriel to heed her words and open his eyes. During this exchange, Chaos Sorcerer Sindri Myr, steals an ancient artefact whilst both parties were distracted.  Macha states that Mordecai keeps the Blood Ravens on a short leash, he knows more than he’s letting on, and the stolen artefact will be the undoing of the world. Macha also informs Gabriel that, thanks to him and his Blood Ravens, the Eldar are too weak to confront the forces of Chaos.

After a pitched battle with Alpha Legion and corrupted elements of the Imperial Guard Regiments, Gabriel and Isador confront Mordecai within the ruins of an Imperial Temple. He reveals that the world is cursed and contains a Chaos artefact, the Maledictum. This stone contains the essence of a daemon, and the forces of Chaos now have all they need to uncover it. He then explains as to why the Eldar were on this world, as it was they who imprisoned the daemon within the Maledictum, hence they were fighting on this world to protect it. This stone has enough power to turn people away from faith and driving them into complete madness. It explains the effect already happening within the ranks of the Imperial Guard but also within the ranks of the ever faithful Blood Ravens. This was why Mordecai was insistent that everyone leave the planet, to protect them and to be sure they weren’t trapped with the daemon, when the warp storm hit. After this lengthy conversation, an alliance was formed between Mordecai and Gabriel, plans are discussed for the destruction of the Maledictum. 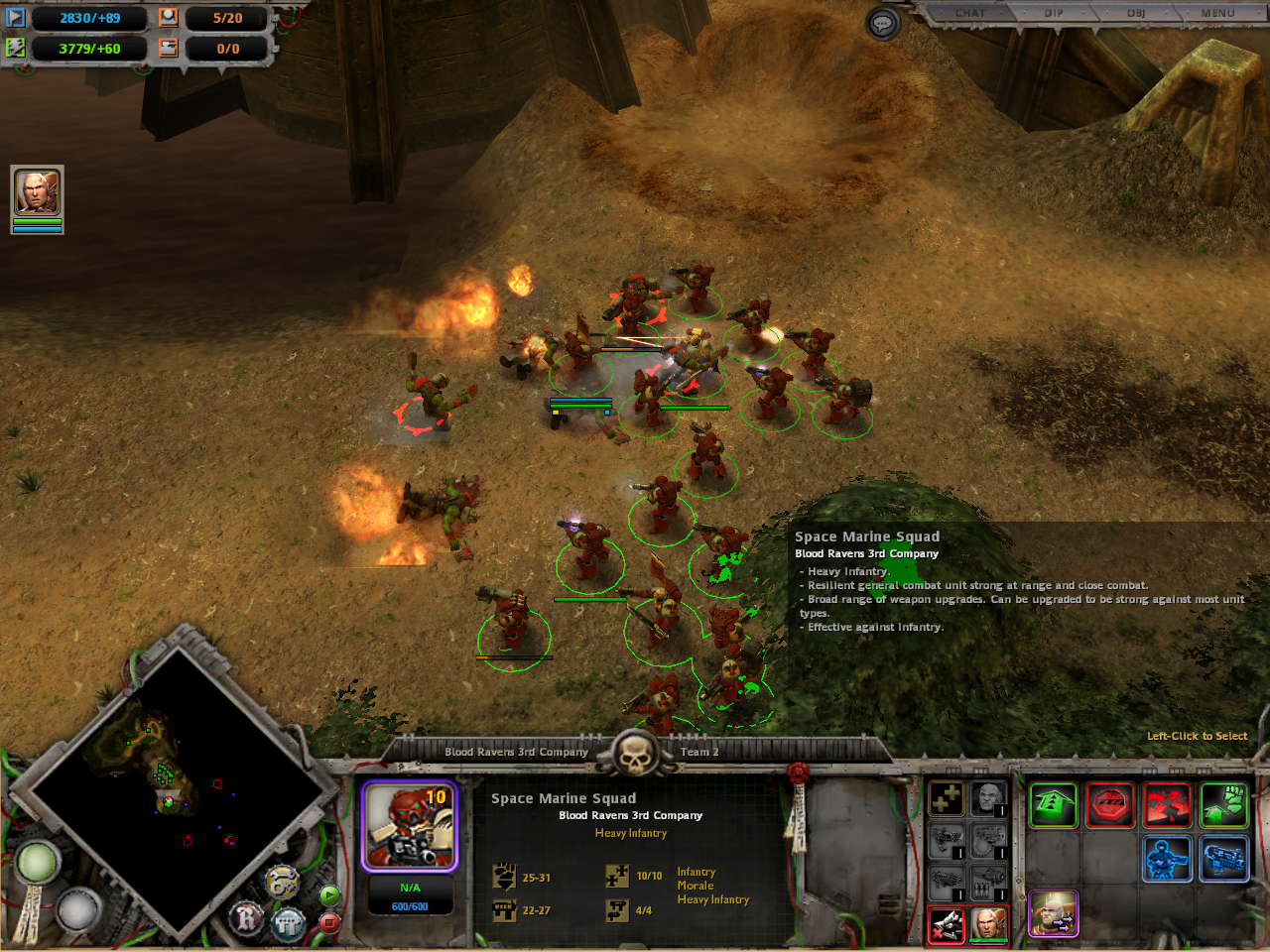 The corruption within the Blood Ravens reveals itself, as a certain battle brother is completely overcome with the many temptations offered by Chaos, Isador makes his own plans to steal the Maledictum for himself. With the Blood Ravens and what remains of the loyal Imperial Guard Regiments busy battling the forces of Lord Bale and Sorcerer Sindri, Isador’s plans come to fruition and he steals the Maledictum. After this blatant betrayal by a supposedly faithful and loyal Adeptus Astartes, Mordecai reveals that he has known for some time, that Chaos was corrupting a Space Marine Commander. He had suspected that it was Gabriel who had been corrupted and they had ultimately paid the price for his error. Isador pursues the traitor in the wake of his betrayal, in an effort to bring him to justice and answer for his crimes. The Blood Ravens are successful in destroying the corrupted troops of Isador, allowing Gabriel to confront the traitor in a duel. The upper hand at first was Isadors, taunting Gabriel about his weakness and guilt over what had befallen Cyrene. Gabriel eventually let’s go of his guilt, stating that he did the right thing to stop the corruption from further spreading over their homeworld, goaded in to fighting back he defeats the traitor. After being beaten, Isador pleads for forgiveness and redemption, Gabriel gives Isador his wish in the form of an execution. Using Isador as an example, he warns his men about the dangers of Chaos and the path of where it may lead if they shall fall to temptation. 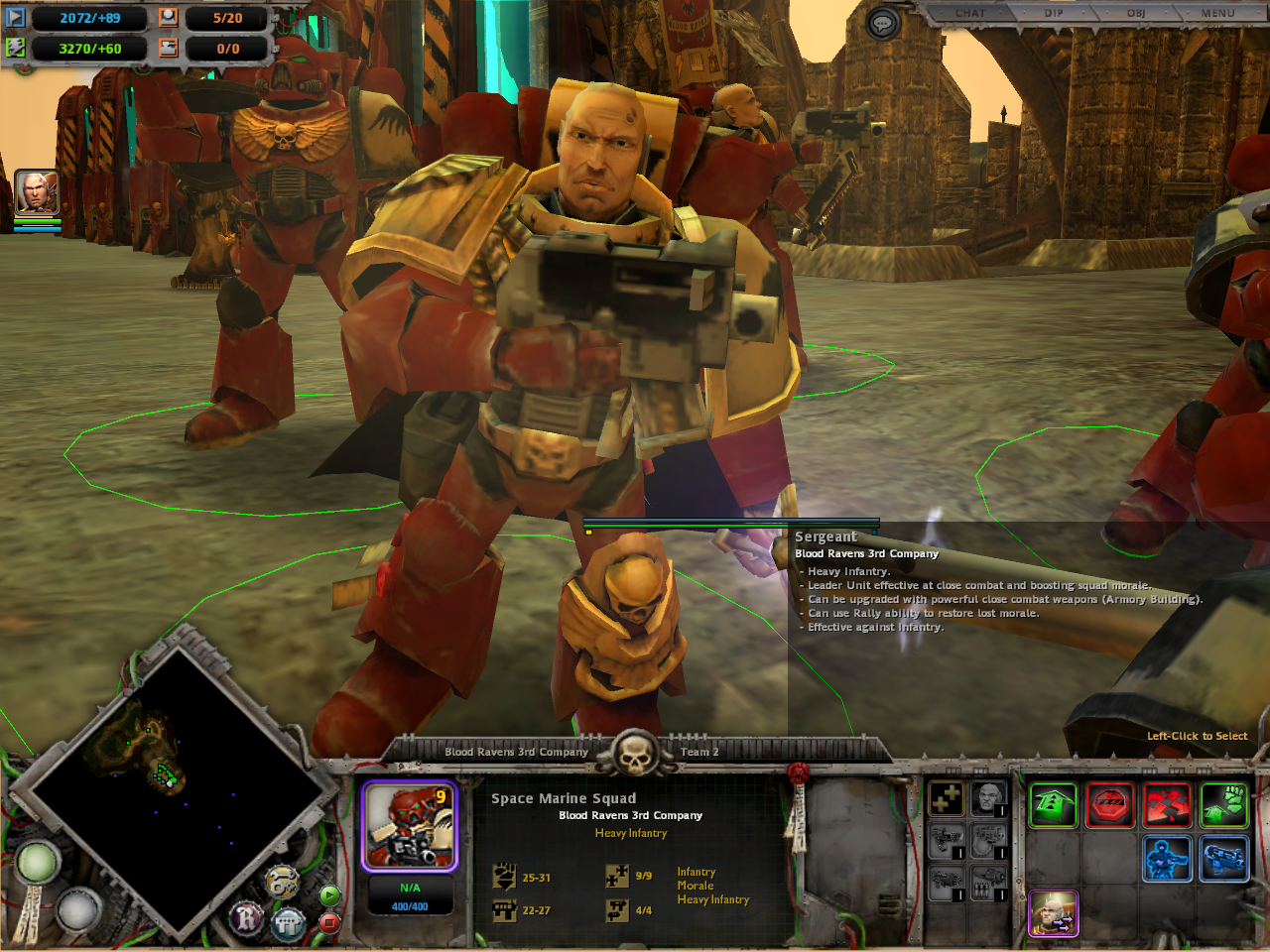 While everything else was happening, Sindri attempted to use the Maledictum for himself, transforming in to a Daemon Prince with the power held inside the stone. Mordecai bestows, God-Splitter, a Daemon Hammer to Gabriel as he feels that the Blood Raven will end the battle and not himself. The Blood Ravens and what remains of Farseer Macha’s Eldar forces, attack the entrenched Chaos forces eventually killing Sindri in the process. With the allies standing around the Maledictum, Macha begs Mordecai and Gabriel not to destroy the stone. Gabriel heeds his own judgement as well as the orders of Mordecai and destroys the Maledictum with God-Splitter. As the Eldar retreat, Macha warns Gabriel and Mordecai, that they have doomed them all. The Blood Ravens and Inquistor Toth proceed to be evacuated, however Gabriel stays behind. Gabriel encounters the Daemon of Khorne, which was unwittingly released when the Maledictum was destroyed. The Daemon lets Gabriel and his men leave the planet safely, as a thank you for his release. Before Gabriel leaves, the Daemon lets it be known that the entire planet is a dedicated altar to the Blood God, Khorne. The whole Ork invasion had been prearranged by Sindri and with all the blood that was spilt through the war, it was used to fill the altar. Each death was a sacrifice that counted towards to the release of the Daemon, in which the Blood Ravens had added many and magnificent deaths as a contribution. The Daemon also confirmed that if he had been released earlier, he would have been easier to destroy. After this list of damning events, the Daemon tells Gabriel to flee, he would eventually come to claim them all. Before leaving the Daemons presence and departing with his men, Gabriel vows to destroy the Daemon.

That concludes the story and the first game in the Dawn of War series, with its plot twists and many interesting characters, it had me hooked. It is what started me falling in love with the Warhammer 40,000 universe. Stay tuned for part two, where we cover Winter Assault. 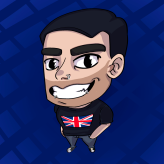 Also known as Torax Outlaw in the online gaming community. Professional game rage addict and hardcore rage quitter. I love games that have tonnes of replayability and engaging storylines.