Only a week in and we already have our first Q&A of the year, with more lined up in the coming weeks. Today’s chat is with the big bad boss man behind HooGames, a popular mobile game developer. So, without further adieu, let’s get to it…

Firstly, thank you for taking the time to chat with us. To kick things off, how about giving our readers a small introduction about yourself and telling us how long you have been developing games for?

I started developing games in 2015, but there were only test games to see if my kids liked it. In 2016 I released my first game in the Playstore (Kevin to go).

Now we’ve gotten to know a little about you, let’s talk about HooGames’ existing titles. What games have you released so far?

First of all, as I said Kevin to go. I was inspired by Giana Sisters, an old Commodore C64/AMIGA hit game. Then followed Magic Traps, which was inspired by Dangerous Dungeon and the game soon developed into a download HIT (100k downloads). Slubber came next when I heard the hit from TheFatRat and asked him if I could use his hit for my game “UNITY”. The next and newest title is ANGRY CUBES. When I was on vacation I got the idea to make Angry Cubes – (an Action Jumper) and my kids love this game.

Is there a particular reason you chose to go down the route of developing mobile games as opposed to games on consoles and PC?

The real reason why I had to play games was my illness. I was operated on my legs several times because I had an offset disorder (hip problems and I could hardly walk anymore). I had been bored in the hospital and had remembered my old C64 times and how I had developed games with my uncle at that time (Roadrunner and a Starwars game) but the games were never released. When I just started to develop them my kids thought why I don’t make the games for mobile phones, so I came up with the idea to make games for Android phones (Soon iPhone, IOS).

You’ve mentioned the games you’ve released so far already, but let’s focus on Angry Cubes which is one of your latest releases. What can gamers expect if they were to download it?

Angry Cubes, as I said, was an idea on vacation. In Angry Cubes, the player gets a kind of Doodle JUMP “2.0”. You have to come up with your dice to free his little cubes. You have 10 platforms to get higher, to get more platforms and to reach the goal you have to collect coins. With the coins, you can buy a lot of different characters. In the game there are many secret hidden and also traps that can make your life easier or even harder. The game Angry Cubes has no time limit in the levels and you don’t have to worry about having to pay money to progress.

And what was it that inspired you to make this game?

Doodle Jump and all other Jumper Games. What I didn’t like about those games was that you have to use the platforms that are there, but in Angry Cubes, you can build your own way to the goal. You just have to watch out for your platforms, so a little bit of strategy is required so that you have enough platforms to reach the goal. 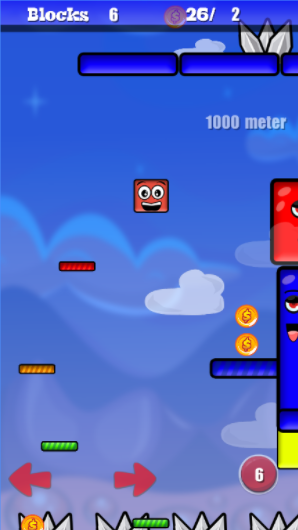 What have you done to make it stand out from the competition?

I’ve tried not only to copy games like some others (colour switch clones and boring I collect coins a game). With my games, you also have to collect and reach a goal, but you have a lot of fun looking for and finding all the hidden objects.

Did you face many bugs during development? If so, what process do you go through to identify them and remove them from the game?

Yes, you always have bugs in your games that you can easily overlook because some games are complex, but I have the best beta testers in the world, my children and their friends (5-12 years old). If they say the game is too heavy or find bugs where I would never have thought of it, I change the game and see to it that the games are published as far as it goes without errors. But there can always be a bug when the game is already released. I’m looking as fast as I can to react to emails or entries in the Play store and fix the bugs.

Moving away from Angry Cubes, do you have any other new games in the pipeline?

Yes, I have a new game in development, a mixture of jump and run, Magic Traps and Dungeon Digger. But I don’t want to reveal anymore 🙂

Just a couple more general questions to tie things up; what advice would you offer to someone looking to get into game development?

My well-meaning advice is you don’t get rich (you can get rich, but you have to have the ” idea ” for that) it has to be fun, let others play your games and don’t copy colour switch or other games. Bring new ideas, or make new ones completely new to old ones.

As a small indie developer who makes mobile games, how do you feel when lots of developers copy a game that’s been successful to make some quick money? Do you think that more should be done to protect hardworking developers like yourself?

I don’t think it’s bad when you combine an idea with your own ideas. What I do think is bad, is making some naughty copies to make money fast and unfortunately, the stores react very slow when they report something like that as indie developers. If you have a lot of money, it’s easy to punish people for stealing ideas, but as a small developer, you have to hope that Google and co react to their emails.

And finally for a bit of fun, if you could create a sequel to any game ever made, what game would it be and why?

The old AMIGA HITS of BITMAP BROS. I love the games of Bitmap Bros. I have read that GODS is coming back as a remake and I am looking forward to it very much. What I would like to see is Chaos Engine and MAGIC POCKETS. Also the old Psygnosis games or some other AMIGA HITS. I like the old 2D games HITS from back then, but also the new ones like DAN THE MAN 🙂

And that wraps up our first Q&A of the year. Big thanks to Gerd from HooGames for taking the time to speak with us and hopefully we can bring you some news of his current WIP when it’s closer to release. For more info on the developer and to find out where you can like, follow and download their games, check the links below.