Today we have the pleasure of bringing you our latest Q&A which took place with an awesome Indie Developer who goes by the name of Chris Square. Chris recently released the game Squarehead Soccer for Android and iOS, and took time out of his busy schedule to chat with us.

To get the ball rolling, let’s start with you telling our readers a little bit about yourself. Who are you and where do you come from?

Hi there – my name is Chris Square and I am an indie game developer from Austria always looking for new challenges. I’m currently not just working on my next game “Squarehead Birds” but also working hard on making my passion my daily job.

How long have you been developing games for? And what was it that got you into game development?

I was always fascinated by video games and started developing my very first game when I was a kid back in the 90ies. I created a simple but crazy text based trivia game on MS-DOS for my friends. It was a lot of fun seeing them trying to figure out the correct answers. The thought that other people are playing what I have created kept and still keeps me very much motivated. It’s just great when other people enjoy what you do!

If you were offered an opportunity to be part of the development team on any game, past or present, which title would be your dream title to work on?

If I had the opportunity then it would be the game Rez at the time when it was released on Playstation 2. I like games that try to think outside of established genres and truly create something new. The development team behind Rez has created a timeless style that still feels fresh and new.

Now we’ve gotten to know you a bit, let’s talk about your game Squarehead Soccer. Tell our readers what kind of game it is?

Squarehead Soccer is a crazy free kick arcade game with one simple target: Shoot as many goals as possible without missing. All that is needed is the tip of a finger to make that happen. There are plenty of level to master and lots of different characters to choose from. Last but not least there is an online world high score table for players to compete against each other. 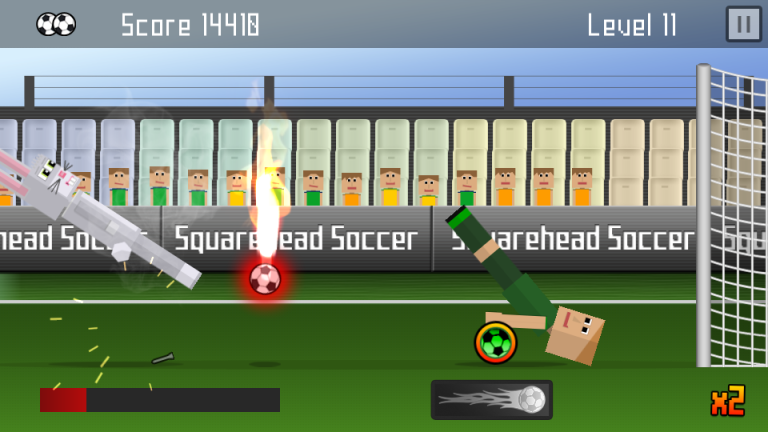 And what platforms are they able to play it on? Are you looking at bringing it to other platforms in the future?

Squarehead Soccer is currently available on iOS and Android. There are currently no further plans to bring it on to other platforms. But let’s see what the future brings 😉

What was it that inspired you to make this game? Are you a big fan of football?

I think it was two things that brought me to this game: I enjoy playing football a lot and always thought about making a game. At the same time, I am somewhat fascinated by arcade games that use a simple principle to create an addictive gameplay. So I tried to put these things together and started playing around with a 2d physics engine. After a few hours, I figured out the basic gameplay that is the game right now and started developing the core game.

There are quite a few popular indie games based on football such as New Star Soccer and Perfect Kick. What have you done to make Squarehead Soccer stand out from the competition?

Compared to a lot of other free kick games, Squarehead Soccer lets you start right after you have downloaded the game. It focuses on a gameplay that is easy but at the same time challenging with a steep learning curve. It is meant to be played when you have a few minutes time – in between lessons, between meetings, when you wait for your train to arrive etc. It’s not a game that where you spend hour after hour playing but rather a game for the quick fun.

A couple of more technical questions now; what software did use for development of the game?

I used Corona SDK for development which is an easy to use game development framework that has a very nice and easy physics engine. 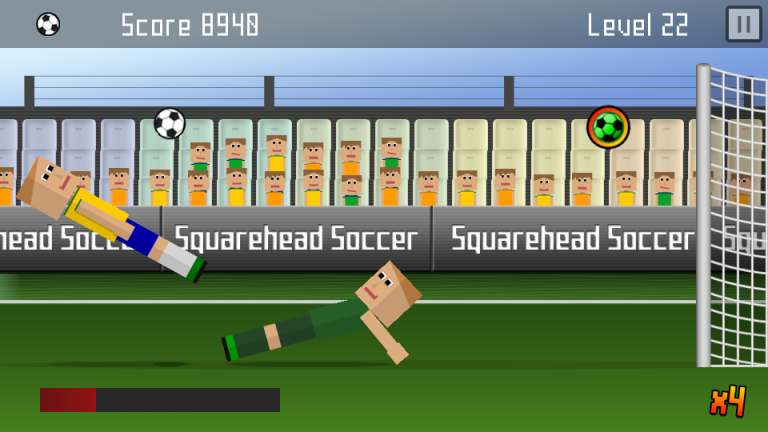 Would you plan on using that software again or would you look at trying something different?

I was thinking about using Unity for one of my new projects. For my current project Squarehead Birds, I stayed with Corona SDK since I think it is still one of the best choices for 2d games.

Did you face any serious problems during development, such bugs that took a while to fix or getting the game’s physics to work how you wanted?

Sometimes it’s a feature and not a bug 😉 In Squarehead Soccer I was thinking about how to combine the single body elements that make up the goalie’s complete body. After playing with the goalie’s physics I then forgot to put the head of the goalie on top of the body and as a result, the head was just rolling around. This was quite funny and in the end, I included that as some kind of Easter egg into the game. If you hit the goalie’s head hard enough with the ball, the head might fall off!

And following on from that, did you have any moments during the development where you felt like you’d really achieved something besides finishing the game?

With Squarehead Soccer I wanted to create something new – new game mechanics that I haven’t seen anywhere else. Soon after the basic concept turned out to be working I felt that this could really be more than just another game in the mobile games section. That was something that kept me very motivated.

Moving away from Squarehead Soccer, can you tell us if you’re working on any other games at the moment?

Of course! I am currently working on Squarehead Birds for iOS. Squarehead Birds is an arcade shooting game where you need to shoot as many birds as possible. The game will be something like a reminiscence to all the bird games out there like Flappy Birds, Angry Birds and Crossy Roads but will have its very own unique gameplay. As a fan of surreal things, I want to add crazy slapstick like elements to the game. I want to surprise and make players laugh. 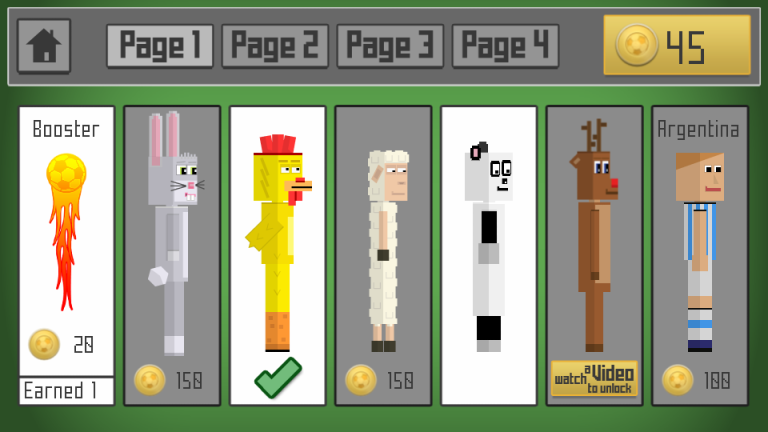 Just a couple more general questions to tie things up; what advice would you offer for people who want to get into game development?

It’s simple: Just do it. If you have no idea about programming then just teach it yourself and get started. There are so many tutorials for all gaming frameworks available – you can really learn anything online! And once you have an idea and started your game project then don’t get too much lost in details. Better finish your game imperfect than never!

When it comes to mobile games like yours, many developers offer free and paid for versions, the difference usually being to remove advertisements. Some games, however, are free upon purchase but then get you with in-game transactions. We’re now even seeing more and more AAA games doing this too like the Forza series where you pay to unlock extra cars and tracks. Do you believe in-game purchases are a good thing or do you think that gamers are being ripped off and being sold half-developed games and being forced to download the rest at an additional cost?

I think you are pointing into the right direction with this question. Selling a half-developed game and then charging for the missing half again is not fair. And that’s what it always should be: fair. If you get a game for free I think it is ok to also have in-game purchases for an additional cost. Anyways in the end the consumers have the power – if no one is going to pay for half-developed games or excessive in-game items then the big companies will have to drop this concept.

And finally for a bit of fun, who is your favourite singer/band of all time?

As someone growing up in the 90ies I’m still very much into Grunge. So if you ask me about my favourite band of all time it is going to be definitely Nirvana! I can still smell the teen spirit when I created my first game 😉

And that concludes our chat with Chris; a great guy and a hard working individual who wants nothing more than to make game development his full-time occupation. And you can help him do that by downloading his game to your mobile right now and letting him know what you think. If you want to follow Chris to check out his latest work, as usual, a developer bio and links to social media pages and websites can be found below.

My name is Chris Square and I am an indie developer from Vienna/Austria, creating games for Android and iOS since 2014.