Four hours into InnerSpace and I’ve finally gotten to grips with the various tricks and nuances of the control scheme. I can drift and dive with the best of them, but I’m still not really sure why I’m doing it. I love an aimless meander through fantastical, brightly coloured environments as much as the next disillusioned millennial but the party has to end sometime (usually at four in the morning when your guy isn’t answering the phone and you’re all out of cheap lager, sobriety is starting to set in and you’re wondering what went wrong in your life to lead you to this moment. Wait, what?). It’s all so pleasing on the surface – buttery smooth controls, a colourful world which is an absolute joy to look at, and tons of little touches throughout that have all the hallmarks of a well made game. The ways your craft can interact with the environment feel natural and traversing the Inverse’s biomes is a good time.

Flight based puzzling flips on a dime between fun and frustrating. It’s often not obvious where the next piece of the conundrum lies, or if you’ve even completed it at all, which seriously hamstrings the momentum soaring over icy tundras and infinite lakes builds. Looking for the next tiny part of the environment you need to move forward as you glide across a surreal landscape is enthralling for the first ten minutes, but the shine wears off before long and attention begins to slip. They’re always straightforward when you find them, but getting there in first place feels more like a chore than the magic of exploration. As a work of art, InnerSpace is incredible. As a game, it can feel tedious and hollow at times. It certainly has moments where all those issues melt away and you drift from one awesome scene to the next, but these are underscored by common hiccups that stall your play completely. 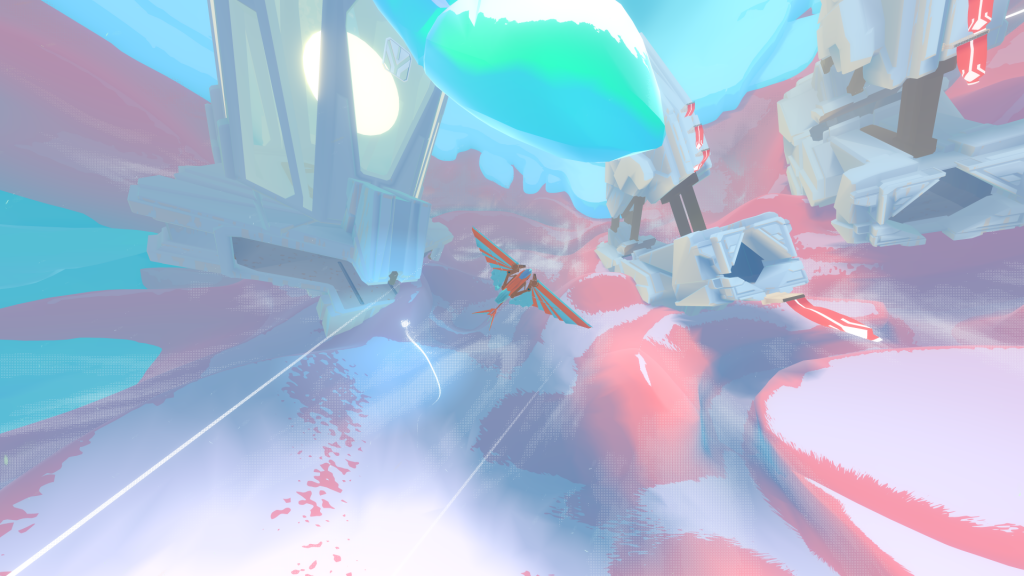 What really shines are the giant Breath of the Wild/Shadow of the Colossus style boss encounters, which condense the world-based enigmas into powerful encounters, a great sense of scale making you realise just how small and fragile your little craft is. These encounters are exhilarating, and if you enjoy that David and Goliath feeling InnerSpace delivers in spades – you just have to wade through some tedium to get there. It has a pure, innocent feel to it, supplemented by incredible world building and a minimal story that gives you just enough context to keep the sense of mystery alive. It’s nice to play something so clean for once, with an absolute absence of muddy brown palettes or emphasis on high scores. It’s like a nice little holiday occasionally ruined by fat tourists and family bickering. In that same vein there’s not an awful lot to keep you coming back once you’ve seen everything it has to offer, and most of the really neat gameplay stuff happens towards the end.

You unlock powerups and new vehicles as you progress, some of which change the way you fly in amazing ways, but you won’t see the best of these until very late in the game, giving you limited scope in which to use them. It’s a shame because the game as a whole would have been much improved with earlier options for variety. It might even have alleviated some of the frustration you feel as you batter the plane against various walls and structures in an attempt to progress. It’s not that the game is too hard, it’s just genuinely difficult to distinguish between environmental fluff and objects you actually need to interact with. Even the smallest extra audio or visual clue would have helped you navigate much faster, and give you the room to appreciate all the things InnerSpace does right – because despite my moaning about the shortfalls it’s still something you should give a shot, especially if you need a break from the gaming norm.

I enjoyed my time within the Inverse. It’s beautifully realised and you’ll see some absolutely stunning worlds while you explore – the gameplay issues and odd pace to upgrades get in the way of it being an essential play, but if the wonderful visuals have piqued your attention, you haven’t seen anything until it’s all in motion. A living, breathing art gallery, with the odd empty modern art installation along the way. The visuals are one of a kind, and easily the very best thing about InnerSpace – just don’t expect the gameplay to be nearly as satisfying.