Conspiracies and honey: The Council Episode One review

Thrust into the belly of a secret society manipulating politics and populaces the world over, The Council doesn’t waste any time in getting down to business. As soon as you’re introduced to Louis De Richet and his enigmatic mother in a brilliant cold open, the two are separated, and the wayward son finds his way to a secluded island off the coast of England to investigate her disappearance. There’s more subterfuge and social maneuvring than an average episode of Game of Thrones, and it’s clear from the outset that developer Big Bad Wolf is making an ambitious attempt to redefine the narrative adventure, a genre which until now has been famed for emotional impact and drama at the cost of deep gameplay mechanics. In The Council, your choices don’t just have an impact on the way the story plays out, but also the skills your character develops. It’s no longer a case of decisions changing stories – now, they change your hero too, and the talents you invest in will forge a unique path through webs of deceit and grand schemes. 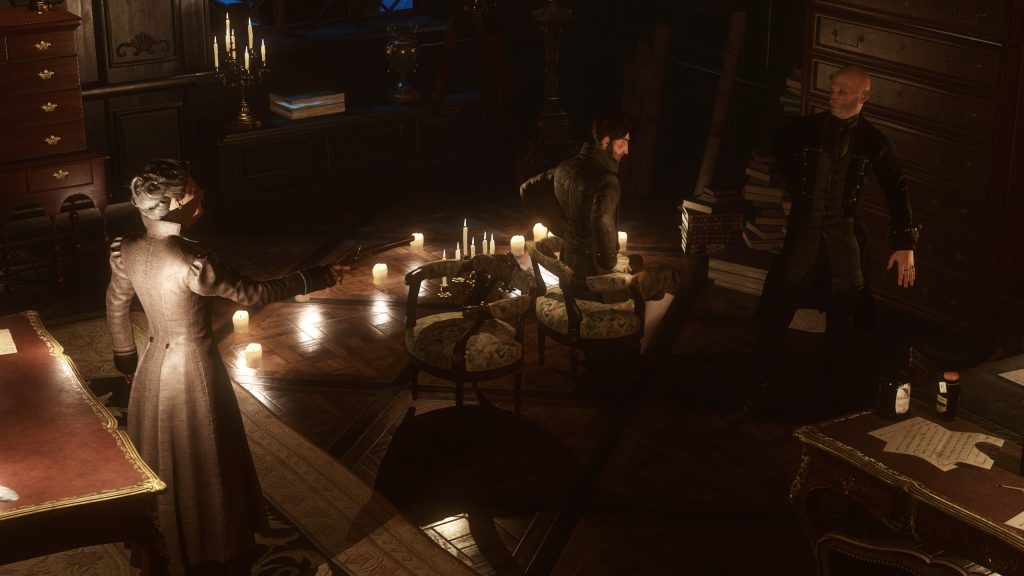 The setting is a lavish manor, dark and indulgent, and your fellow guests are premiere nobility, important religious figures, military leaders – George Washington plays a significant role as someone who could either prove to be a vital ally or just pursuing his own ends – though the same could be said for every character. Everyone seems to know Louis’ mother, and conversations show multiple facets of her personality, some flattering, some deeply concerning. Secrets are exchanged like currency, either as parts of the grander puzzle, or just ammunition to get one up on someone later. There’s a choice of three classes, each some form of learned investigator, and the system allows you to specialise in one area and still diverge into the others at a higher cost.

I opted for the Occultist, a man of subterfuge, manipulation, and science, and it quickly becomes apparent that the doors your skills open close others just as quickly. When it comes to snooping, stealing and outsmarting, my Louis has no equal, but put him in a situation that requires boldness, conviction, or a greater understanding of human psychology, and he misses opportunities to gather information. Most of your actions require the use of Effort Points, which can be restored and won back, but are in a short enough supply that they must be rationed. You can’t learn everything, and “winning” the conversation system can have a great impact on how things progress – you just have to make sure to actually use the abilities and information at your disposal.

Not all clues are obvious, and neither is the layered conversation system. The strengths and immunities of your opponents can be displayed, if learned, with the use of an inventory item, but it’s largely down to you to implement the things you know. It will always present an array of answers to situations, and you must rely on your personal memory to get the best result. Blundering, or encountering an immunity, will lay an adverse effect on you – shaking your conviction, or removing HUD details to give you a harder time. The game leaves a breadcrumb trail of hints to guide you to success, with progressively more complex conversations, and you’ll grow to rely on your abilities to get you an angle on some genuinely implacable characters. The boorish French revolutionary may be easy to outwit, but the old Cardinal who trusts with one hand and manipulates with the other is another story, and getting what you need from him is going to be much more involved.

A lot of visual effort has been expended to portray The Council in every grim detail. It looks amazing but facial animation can be stiff and suffers from similar lip-syncing problems as Life is Strange, often a sharp contrast to the amount of detail in the cast’s faces. Voice acting fluctuates from solid to flimsy but this may be down to some scripting oversights, especially when Louis de Richet, a Frenchman, spouts phrases like “Oh, man” like an exasperated American teenager. To make matters stranger he adopts an almost perfect French dialect when it comes to pronouncing the names of his countrymen to the extent I assumed it must have been another voice actor. It seems a strange choice to Americanise his dialogue, as much of The Council has fantastic attention to detail.

Every conversation is a battle. Every unlocked room an opportunity. It’s a genuine thrill to dissect someone’s psyche and break down their barriers, hammering at weaknesses until they cave – but maybe that says more about me than it does The Council! The game does a great job of making you feel like the detective, never overtly presenting answers, and that’s what so many of these games don’t get right. This is usually because they’re so concerned about getting you to the next big moment as quickly as possible, but The Council makes you work for it. Exploration is a necessity, taking your time and picking through your surroundings rewards you with valuable restoratives and hints for later conversations. So often games like this are stitched together from the pieces of titles that came before, but this is a product of inspiration and ambition, taking note of the trail already blazed and walking a more complex route. It’s the first of its kind to feel like a complete, intricate world, not just a selection of moments in linear environments where choices don’t affect much more than a few lines of dialogue.

At the end of the first episode, you’ll have navigated dinners fraught with tension, solved both physical and personal puzzles, and potentially made your first allies, but it’s clear that we’ve yet to truly scratch the surface of The Council. The schemes are in motion, but so much is still hidden behind the curtain, and I can’t wait to delve right back in for more illicit rendezvous and global conspiracy.

Note: The Council is an episodic game – as such we’ll score each episode individually and combine the scores into an average upon the final instalment’s release. The score above is purely based on the merits of this first episode.