VR and Early Access is a risky combination. Both come with their own associated growing pains, and while it can be awesome to see a game through all its early stages of development, that can come with a lot of technical glitches and hiccups. It’s all part of the early access process, of course, and some real gems have seen releases they might not have without it.

Primordian is one such title. It’s on the edge of completion, with most of the content already there, and coming in at under £20 on Steam it’s less pricey than many less ambitious titles. What Stonepunk Studios have set out to do is make full use of the hardware, crafting a detailed alien world rich with bizarre flora and fauna, and a helping of Predator-looking monsters to relieve of their body parts. 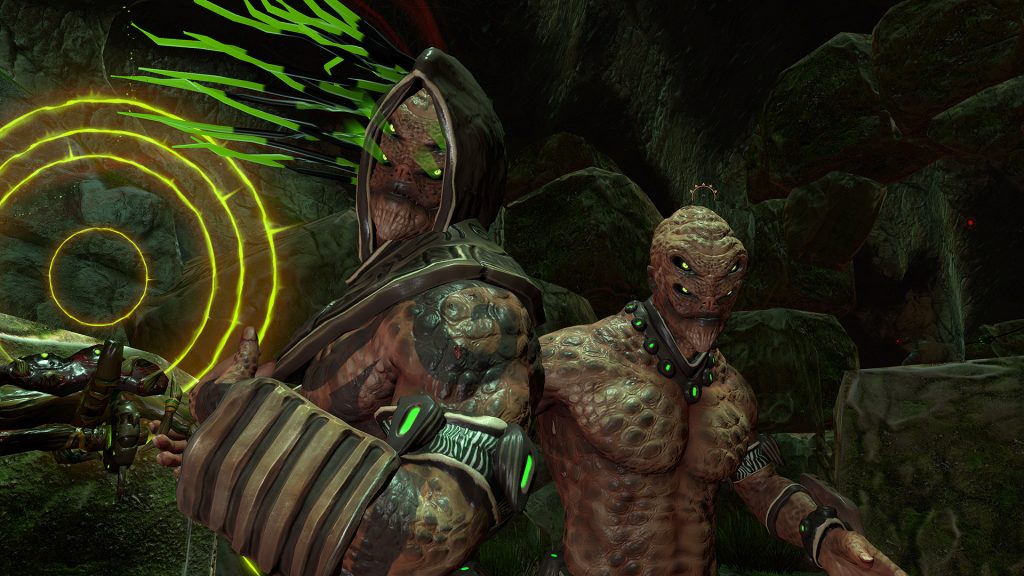 Recent updates have provided the game with a helpful tutorial area you can wander through to customise your settings and get the basics, something much requested, and a host of smaller tweaks that make the game easier to play in your space. Being able to turn in motion with an analogue stick is a massive help for those of us without 360 tracking and as such enabled me to swing my swords with abandon (I always appreciate a VR game that I can play without fear of scattering a shelf of blu-rays or punching a wall). Of all the titles I’ve played Primordian seems to get combat right in a few key ways. First of all, your weapons bounce off of environments and enemies in a believable way. If you run forwards with your hands down they’ll audibly scrape and spark across the ground, and hit detection is considerably more advanced than other melee-heavy VR games. Feedback as you clatter against armour is satisfying, and it all goes towards making the world much more immersive. A real problem I usually have with games like this is guns and swords passing through scenery and each other weightlessly, and Primordian subverts that entirely. You can get an idea of how smooth the combat feels in the video below.

You can deal more damage by charging the blades, either by smashing them against each other (which pleased my inner orcish warlord immensely) or swinging them hard. You’re encouraged to aim for exposed body parts, which more often than not completely removes them, and simply flailing against your targets to brute force won’t meet with success. You don’t need to be super precise to succeed, but if you spend a bit of time dodging and blocking enemy strikes it quickly becomes second nature and adds vital immersion to the combat.

Even the short glimpse of Primordian’s opening ten minutes above gives you a look at how beautifully weird the world is. It’s one of the first VR experiences I’ve had that genuinely made me feel like I was somewhere else, which made the few crashes I experienced all the more heartbreaking. The crash at the end of the clip is one I’ve experienced three times all around the same mark, and the only option every time has been to close the game outright and relaunch it. Later in the week I’ll reattempt it without recording and see if that fixes it but it’s not an issue I’ve ever encountered so regularly with other games(Editor’s note: Nil has determined that this was a result of utter laziness regarding the updating of his graphics drivers. The developer has been unable to recreate the bug and Nil will be dealt with appropriately). Aside from the tutorial in which I failed to throw an object at a target for an embarrassing five minutes I’ve been unable to progress much beyond the first half hour but I have no doubt it’s probably something to do with my setup rather than an issue with the game itself, which is, for the most part, completed.

I look forward to seeing where Primordian goes. It’s ambitious, satisfying and has incredible potential. It’s still a little rough around the edges but has a hell of a lot to offer and the developers are throwing a lot of weight behind it with constant updates. They’re listening to community feedback and implementing changes quickly, and if they keep that ethos up after launch, Primordian is going to become something special.

Our preview will be continued on Friday with some more video gameplay and a look at the game’s development so far.