Editor’s note – this review features two points of view from different writers – the review written by myself with some impressions from streamer and fan of the game Chrisgemmo. This is not usual practice but given the divisive reaction to Survive at launch we thought it best to include a range of opinions to cover the game fairly.

At first glance, Metal Gear Survive certainly looks like a Metal Gear game. It has the visual polish, the extraordinary surreal storyline that only makes sense if you look at it through a kaleidoscope, and a few signature gadgets implemented in a new zombie-slaying quest for survival. Spend any amount of time with the game itself though, and it becomes apparent it’s Metal Gear in name only – and while it does indeed have its own merits, that starts things off on the wrong foot. Gone is the kinetic stealth and creativity that people love the series for, replaced by a simple need to survive in a hostile environment filled with shambling corpses. It’s a genuinely gruelling challenge that demands you stay on top of a bunch of different mechanics, making progress feel almost as difficult as the ongoing Brexit talks.

The critical reaction thus far may have soured many of you already, but take away the microtransaction drama and what you have is a functional game that strives to create an atmosphere of absolute desperation – and it succeeds, but whether or not that makes for a fun videogame is still up for debate. Hunting animals, staying hydrated, and, of course, base building is all part of the daily grind, tension gripping you as you roam about a wide open wasteland in fear of the next impending horde. It’s tough to stay alive, and credit to them, few survival games boil it down to that. Survival is a long, gruelling exercise in repetition and improvisation, with each day presenting the same mounting threat. It’s bleak and hopeless, and while you can upgrade your character to better face the oncoming challenges, you’ll find yourself asking the same question I ask myself every day – is it worth the effort to carry on? (I’m joking guys, everything’s fine… send therapy). 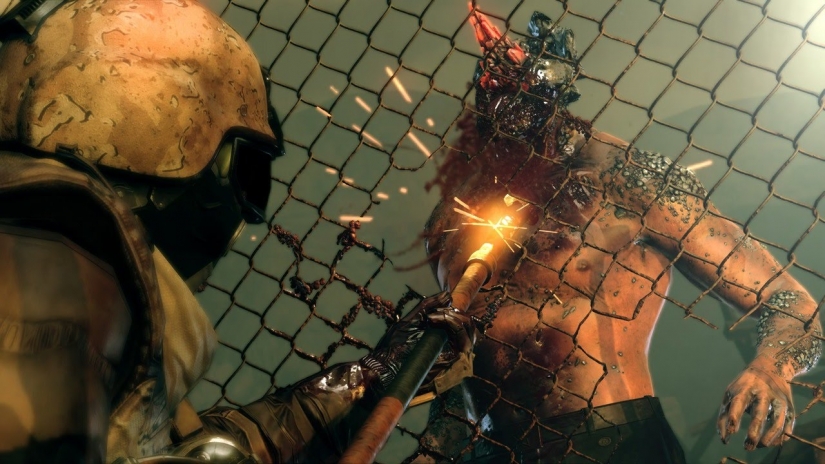 Day after desperate day, you inch forward, establishing bases and switching between guns blazing and stealth. Both approaches have merits and risks, and I have to give credit to Survive for those moments of balance. Stealth isn’t always successful – sometimes it’s better to dispatch enemies quickly and noisily, and it’s these on-the-fly decisions that build a great sense of tension as you progress. On a knife-edge, it flips between feeling downright unfair and stupid as hell. One moment you’ll be swarmed by enemies for seemingly no reason, the next an entire gaggle of Wanderers (Survive’s name of choice for the horde) will be unable to hit you because you’re standing on a rock a few inches from the ground, leaving you free to poke your way out. Seeing as The Phantom Pain has given so much of its DNA to the game, it’s really hard to understand why these issues crop up. Rockstar taught a fantastic class in this very subject when they added (key word) Undead Nightmare to Red Dead Redemption, and it’s hard to imagine that exemplary DLC being as weirdly disconnected as Survive is at times. Who wouldn’t want to play as a zombie Big Boss attracting enemy attention with inadvertent groans for brains? The room for this weird little diversion was already there in the universe, and I think it would have been much less divisive if it had been released as DLC. It could leave its micro-transactions intact with a reduced price tag, and seem a little less like a ruthless cash-in.

It’s easy to paint Survive in a negative light. It has deep flaws, it uses a venerated name to get attention, and it can be tedious. But it has moments of explosivity – rushing to fortify your base as a mass of zombies bears down on it is stressful and frantic, infinitely improved by recruiting buddies online. Playing with a friend or two really brings the game to life, grinds that feel soulless and mind-numbing get a bit of extra spice when you’re worrying about keeping your friends alive as you forage for food and supplies. Unless you’re a huge Metal Gear fan there are a ton of cheaper games that do it better without the castrating microtransactions. There is a near constant dirge of negativity surrounding real-money purchases that’s hard to ignore even amongst casual gamers, with a common consensus being that cosmetics are acceptable, but actual game progression should be off the table. That’s a fairly reasonable compromise – games are getting more and more expensive to make, with development cycles pushed hard and fast, and the box prices can’t really progress past the £40-£50 point without becoming unpalatable for a majority of the consumer base. There is a fine line between supplementing the income from your product with pointless but desirable cosmetic upgrades and locking expected features behind paywalls.

If the Metal Gear aesthetic appeals to you and you’re a fan of the survival genre, the asking price isn’t much for what can be a good time online. Even at the cut price, there’s a few unsavoury pay-to-win elements, with extra character slots gated behind in-game currency only purchaseable with real cash, which is both absurd for a game you have to purchase and an extremely dark glimpse into our future. Weapons storage, experience boosts, load-out slots – all locked behind real money purchasing. Some of these aren’t new to the Metal Gear series – some of them are ruthlessly exploitative and only serve to weaken public opinion of a game apparently not trusted to stand on its own feet as it is. The use of the established franchise to shift copies of a game that succeeds hugely in some areas and fails so deeply in others could point at two potential plans – 1) being that there wasn’t enough faith in the game to succeed by itself, and 2) being a downright exploitation of a legendary name. Either way, this isn’t the way great games are made, and with just a little more effort and a touch less greed, I have no doubt Konami could have produced something brilliant in its own right. Hell, a lot of the problems with Survive could be fixed with patches and even some slight changes to the microtransaction economy.

As an attempt by a big company to get their foot in the rusty, blood-spattered door of the survival genre, it’s respectable. It’s just not Metal Gear.

The game as a whole looks very polished, even on lower end consoles. Its quite easy to run around enemies that are higher than your own level to backstab them – this is also the case for when an enemy is attacking a fence or a barricade. The “Zombies” tend to ignore you and continue on attacking the object. This is a very flawed system, especially when you no longer need to think about stealth and more on putting a fence/barricade up. What I did find to be a challenge at the beginning of the game was finding food and water that didn’t make your character ill/poisoned. After a few deaths and getting to grips with the games mechanics and combat system, the game as a whole became a lot easier and more laid back, I found myself wandering the “Dust” with 150% weight not worrying about what might lurk ahead. As the game progressed, this got hard to do, especially when you left the starting area of “Dite” and new enemies would come into the fold. 3.5/5. -Chrisgemmo