How Dare You?!: Oh … Sir! The Insult Simulator (Xbox One) review

Indie Games have populated the gaming industry so much that there is barely room to move anymore. Long gone are the days where five releases in a month were a blessing; nowadays 5 in a day would be the bare minimum. It is for this exact reason that variety is incredibly difficult to find, and often times a breath of fresh air is tainted by the inexperience of those who create it. Oh Sir! … The Insult Simulator manages to avoid a lot which could taint its original idea, but not without some imperfections along the way.

Launched late last year on PC and now finding its way also on the Xbox store, The Insult Simulator, as one can only imagine from its name, is an insult contest, either between player and AI or player and player, both local and over the web. Basically, the game is played one versus one and pits the characters over a scene which will be at the center of their argument. The player is then presented with the reason of the bickering, and all hell breaks loose once he is given control of the action. The main objective of the game is to deplete your opponent’s health bar, with the use of heavy insults to inflict emotional damage to the adversary. Since this is a turn-based game, you will have to use heavier insults than your opponent, since he will be able to play his hand as well. 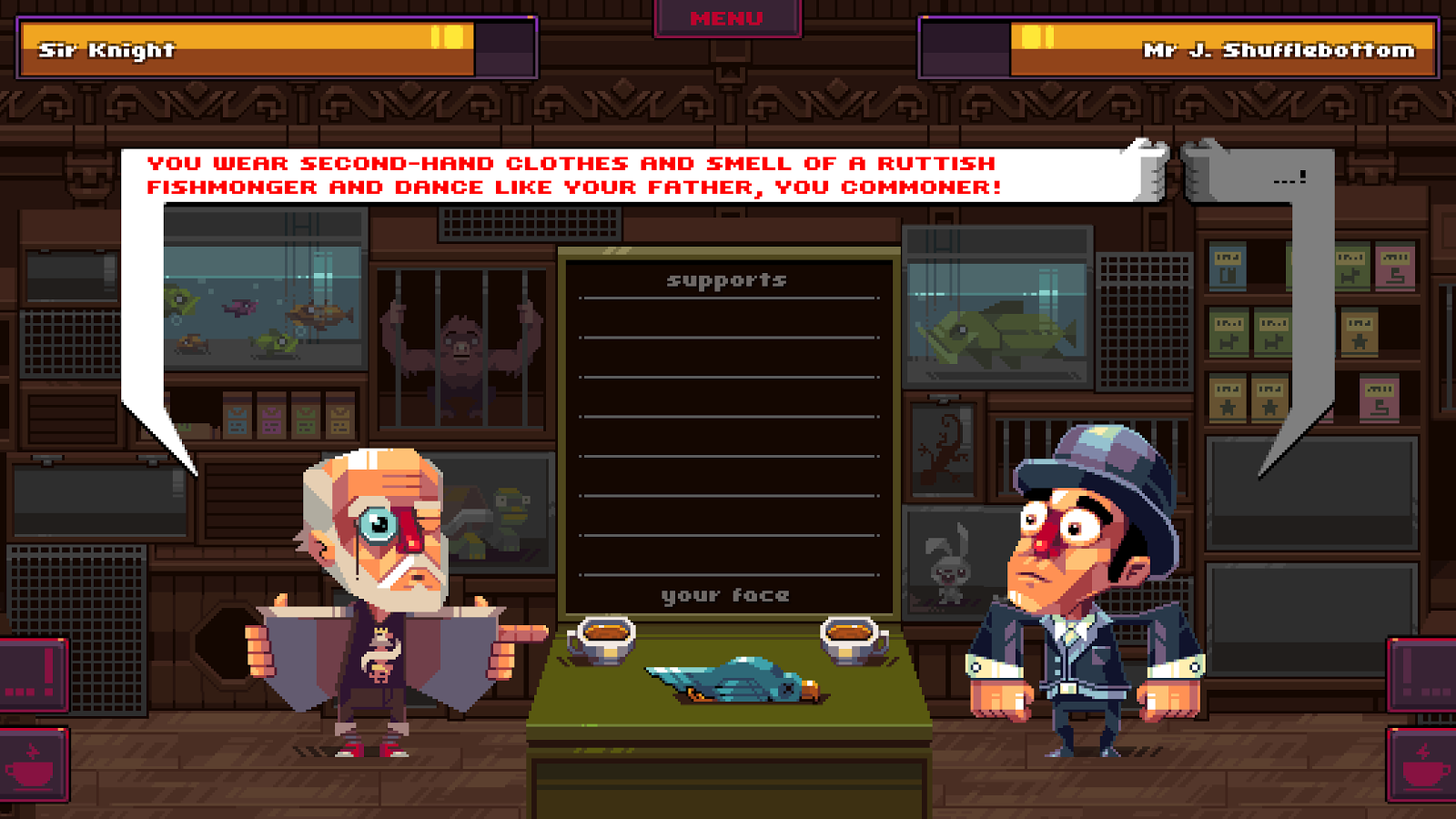 Gameplay is rather simple; you and your opponent will have a shared list from which to create your sentence, and each fragment from the list will be compiled one after the other to create your insult, with that piece of sentence being removed from the selection pool. Each player will also benefit from two “personal” fragments, which only the players themselves have access to, meaning players should pick as many from the shared pool as possible before making use of the guaranteed personal ones. These personal phrases may be replenished once by having a sip of tea, which is also a neat mechanic to never let a player run out of options. One has to keep an eye out for grammar, as finishing a sentence with the wrong syntax will not only inflict a 0 damage to your opponent but will also make you lose all the fragments collected. If in a pickle, one may opt for the “…” option, which will permit you to skip the turn and let your opponent finish his sentence, to have the list refreshed at the beginning of the new sentence building phase with your previous unfinished sentence intact. It all adds up to strategy, as passing a low scoring turn for bonus damage the next is a great tactic.

There are diverse scoring criteria in the game, which make for a fascinating battle for the few minutes you will be debating. First of all, characters will have a weak point which will increase the damage of your statement. If for example a character has his family at heart, insulting his wife or his son will have bonus damage added. Using the same sentence fragment consecutively will also add bonus damage to the sentence, so keeping in mind the insults you will slander at your opponent is key to racking up high scoring insults. Obviously, the longer the insult, the more damage it will do, as long as it makes sense and there are multiple attacks in it, possible by using the fragment “and” between insults.

The Insult Simulator has a very strong base going for it which makes it a great game, but it does have minor shortcomings which impair its experience. First of all, the settings will always feature the same debate, even with different characters. While one can understand the limitations of making different scenarios for different characters, there are not that many different stages, so setting two or three different arguments in rotation could not have been a very big ask. Second, the phrases in the dialogues before and after the arguments are all the same as well. One would imagine different character personalities would at least have different things to say, but apparently, it is not the case in this game. The confusion with this is that characters do have different personalities, as shown by the excellent mechanic that makes characters receive bonus damage depending on what is being used to insult them, but when it comes to reacting to a win or a loss, they all do the same.

With all this said, Oh Sir! The Insult Simulator is a very clever game and it has all the makings of the next game you will play at a party or get together with friends, as it consists of fun, laughter and a hell of a lot of banter!