I’ve fired my sci-fi bow enough to give myself repetitive strain injury, chugged an amount of health-recovering soft drink that would cause an early death via diabetes, and smacked my actual hands into hard surfaces enough raise some concerns about domestic abuse. For the first time since perhaps Wii Bowling my entire body and mind is exhausted and I feel utterly alone in a beautiful but unforgiving world.

Apex Construct is a challenge. Mostly a welcome one, sometimes an exercise in creative swearing. The world it has you explore and fight through is nothing short of incredible, it has a powerful sense of visual identity and the voice performances are sublime. Stepping into a future gone horribly wrong with naught but a bow and a disembodied Fathr-figure, no punches are pulled. It is alive with colour and yet utterly ruthless, sticking you in the middle of a conflict between two AIs named Fathr and Mothr as the last human alive. Fathr tells you that Mothr is responsible for the state of the world and tasks you with killing legions of her droids to uncover the facility’s mysteries and set things right. It wouldn’t be as fun if everything was as it seemed, though, and through interactions with both voices it becomes clear there’s a lot more to the story.

This is where a lot of the true joy comes from. Exploring hidden nooks and crannies to find secrets and clipboards with hurriedly written messages pointing to the grander schemes that from the outset counter Fathr’s wise, Rutger Hauer-ish voice. Levels are relatively small but well-detailed with a lot of incentive to replay later with upgraded equipment, and environments are used cleverly. The fantastic atmosphere Fast Travel Games have woven into this obvious labour of love is so far unparalleled. Every bit of scenery feels like it’s there for a reason, and this is clearly a project forged from a love of VR and just what the technology can do. I spent ages just admiring the details on my mechanical left hand, whirring gently as fingers flexed. That attention to detail is always present, and it almost lulls you into a stupor – until you pick up your combined bow/shield and realise things are much more intense in the facility than you first thought.

Archery-based combat is a tried and true staple of VR, and it’s done well here with very few technical issues, on Oculus at least there were rarely any issues with tracking or registering movements. The problem is it doesn’t seem to marry awfully well with the locomotion systems so more often than not you’ll resort to sticking in one place, maintaining a precarious balance of blocking enemy fire with your shield and taking advantage of brief windows to return fire. At times it feels nothing short of glorious, a lone ranger and his bow against the world, but thanks to a Souls-esque XP mechanic that has you irretrievably lose all your unbanked experience upon death, it can become tedious and needlessly aggravating. Progress sometimes feels unnecessarily hard to come by, and not in a rewarding way – sort of like they took all the bad parts of Dark Souls and left all the good. There are no second chances – the enemy that downed you won’t hold onto your lost points so you can attempt to reclaim them, and redeeming them mid-mission essentially means restarting the entire level. It just doesn’t seem to make a lot of sense. For every strong encounter that proves the strength of the combat, there are ten you’ll sigh and strain through as half an hour’s hard won experience is lost to the ether because you locomoted facing the wrong way and got railed in the back by enemy fire. It only takes a few hits to send you back to the last checkpoint which makes the control hiccups even more aggravating. 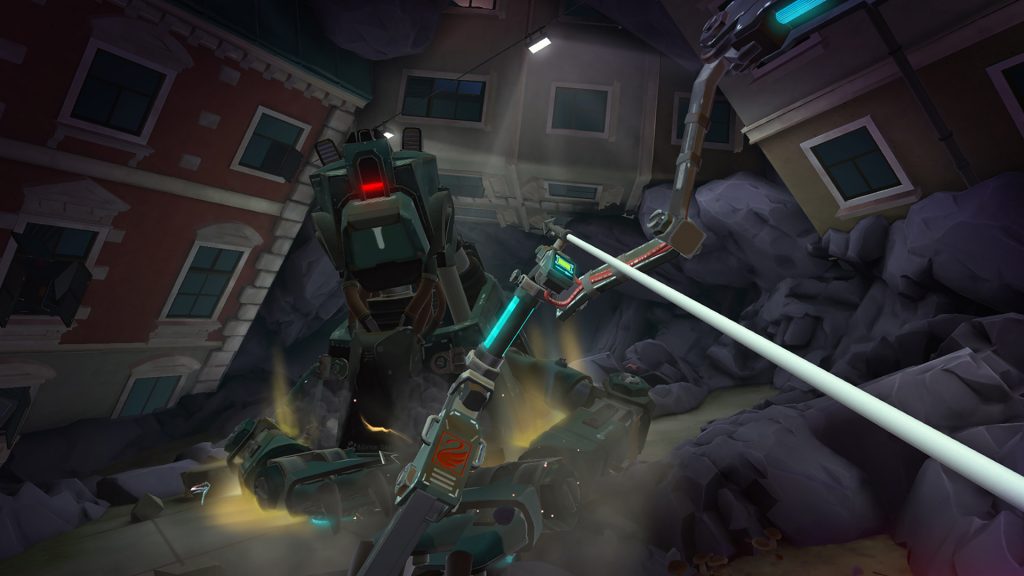 There are a few of these mind-boggling design choices throughout. A recurring task is finding codes to unlock doors, and keyboards in Apex Construct work exactly like keyboards in the real world if you only had one finger on each hand to type with. Navigating the DOS style computer systems is an absolute pain in the arse as you stagger about the keyboards like a dying gazelle still under fire, typing in run commands with all the accuracy of a drunk finding a keyhole. I’m fairly confident I would have done a better job typing blind on my actual keyboard with the Rift strapped over my eyes. It happens so often that it makes the good moments feel stuttered and strewn about a near endless office work experience with none of the whimsy of Job Simulator. It’s far removed from the fraught combat and wonderous exploration that makes the high notes as complete as they are. Until we have full individual finger tracking in VR, we definitely shouldn’t have recreations of objects that require it.

If you persist past the pedantic control gripes and the unreliable locomotion, Apex Construct does reward you, with beautiful scenery you can’t help but sink into and some marvelous encounters later on. Mothr and Fathr are perfect counterparts, providing insights into the calamity that befell the world at a trickle, all the while notes left by survivors long gone challenge the narrative the warring AI minds present. There will certainly be moments where clipboards you need fall into some unseen void, or you lose a significant chunk of experience because you somehow locomoted inside a rock and died, but they’re worth it for the next big moment.

In a lot of ways, Apex Construct represents how far VR has come, but it definitely makes it clear that we have much further to go. It’s a full game – not a condensed experience simply showcasing a few cool features, and it’s a world I hope the developers continue to expand as the tech improves and lessons are learned from this spectacular but flawed first entry. It’s not perfect, but you absolutely should play it. It astonishes and missteps in equal measure but it’s a game built with the future in mind, and so comes with the growing pains of technology still finding its feet. So we might have a long road to travel before these games reach their full potential – but we’re damn sure going to have fun on the way.