I’m admittedly a bit of a sucker for Attack on Titan. It’s one of the only anime series that has stuck with me past the initial watch (looking at you Devilman Crybaby, you absolute bastard) so when the second game appeared in a bit of a release drought I inevitably bit, keen to carve up a few Titans and spend some time with my favourite characters ahead of the third season’s release this summer.

It’s developed by Omega Force, the Japanese studio widely known for the Dynasty Warriors series, and there’s a fair bit of that DNA present in the massive battle arenas and base building that makes up the meat of the game. Attack on Titan 2 is primarily a very faithful recreation of the show’s first run, which is something of a double-edged sword. Sure, you get some extra insight on characters between missions, and your custom character can play a part in a lot of big moments, but at the same time it means most of the game simply retreads old ground instead of adding something new. It was probably the safest bet, but as a result you’re moved very quickly from being a promising cadet competing in training to a one man (or woman) army untroubled by all but the deadliest enemies.

Using the ODM to get around and tackle Attack on Titan’s signature giants is a ton of fun. It feels really similar to Spider-Man 2’s famous web-slinging, and really comes alive in towns and forests, allowing you to quickly get from threat to threat in a way that feels grounded and satisfying. When you approach Titans you shift into combat mode which allows you to pick a limb or weak spot to focus on before launching into the air and circling them until you find the best angle to attack. Severing arms and legs lessens their mobility and stops them from yanking you out of the air, and often rewards extra upgrade materials, but to down them you need to strike at the nape. It can be fun to reduce the massive grinning Titans to wiggling torsos, but in most of the game’s battles they’re everywhere and it’s just more efficient to zero in on that weak spot and get them down as quickly as possible.

Missions revolve around protecting targets, establishing bases, and taking out Titans as efficiently as you can. This is fun in short bursts (my first story mode clear took place over 3-4 days) but longer sittings start to reveal that as cool as taking out a Titan’s legs with the aid of Eren and Armin before latching onto their neck and delivering that swooping killer blow for the first time is, after the hundredth it becomes a bit of a formula. Try as it might to freshen it up, it doesn’t quite manage the task, only introducing new ideas in the final hour or so of the campaign. By that time it seems so anxious about them it feels the need to constantly repeat prompts in case you get confused that you’re not bouncing from target to target with the ruthless efficiency of a meth-addicted, katana wielding Peter Parker. The Titans are dangerous, sure – it’ll only take a couple of hits for a game over – but once you master traversal it becomes a non-issue, enemies so pre-occupied with either flailing against scenery or grabbing for comrades that they’ll outright ignore you. It only becomes a concern once they enrage, and you have an item in easy supply from the outset to stop that in its tracks. Hilarity and frustration ensue when large groups of the gormless crawling giants get together, crashing into each other and preventing any sort of effective attack through sheer clumsiness. It dampens how absolutely terrifying and unsettling the misshapen mammoths are. 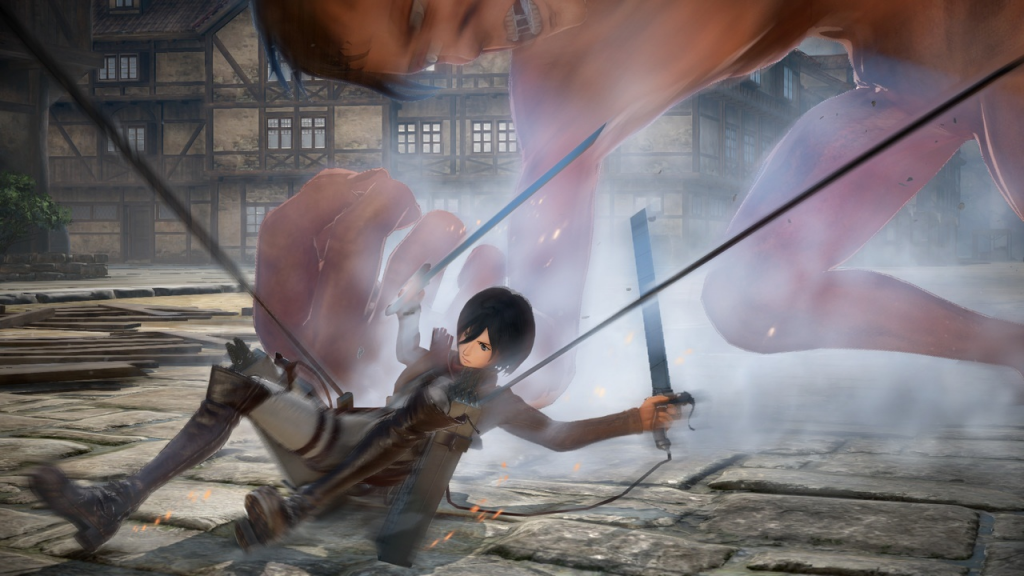 Where Attack on Titan 2 really shines are the battles against single, super-powerful enemies, wearing them down Monster Hunter style as they trash buildings and crush allies left and right. Chasing the Female Titan through a storm of debris as she makes a break for freedom is a definite highlight, but the continuous issue is that most of the time the game is content to merely recreate all the cool stuff in cutscenes instead of putting you right in the middle of it. It’s a fun use of the franchise, just not by any means a definitive one. To truly capture the essence of Attack on Titan you’d need to get Shadow of the Colossus and Devil May Cry drunk and lock them in a bedroom together with an industrial supply of Viagra and lubricant. The idea of wearing massive enemies down bit by bit with your squad and a generous helping of stylish combos before going Titan form and levelling the playing field is too exciting a concept to pass up, where Omega Force’s entries play it safe and save all the really good stuff for cutscenes (apparently if you have an ally capable of transforming in your squad you can trigger a transformation and play as them for a short while but the opportunity never presented itself to me in the campaign). I’m not saying Omega Force should stop making these – just suggesting that they let Ninja Theory have a crack at it too.

Upgrading gear through funds and materials salvaged from missions does let you tailor your playstyle somewhat, and it’s massively liberating once you unlock the later ODMs that let you attack a Titan from halfway across the map. By the end the reach of your grappling gear almost eliminates the need for travelling by horseback, instead catapulting from Titan to Titan at breakneck speeds. Skills are obtained by making friends (beat us over the head with that message why don’t you) and proving your mettle as a soldier grants Wings of Freedom currency to upgrade the bases you establish and buff your squad. You’ll be accompanied by a rotating selection of characters throughout, all with individual abilities for support – ranging from simple item uses and attacks to impressive co-ordinated strikes that remove limbs and cripple enemies.

The meat of the game is broken up by fan service “daily life” segments which gives the opportunity to build relationships with other characters. I actually found these substantially more enjoyable than the Titan-slaying, as they focus more on your character’s part in the world. By talking and taking them along on scouting missions you get a little extra insight into humanity’s last line of defense. It’s the only way to acquire skills, but getting to know them is inevitably going to be a much more rewarding prospect for fans. They become a nice break from the somehow dramatic monotony that a lot of the missions eventually drop into.

Ultimately, Attack on Titan 2 is a lot of fun, and daily life injects it with much-needed substance. It just stumbles at the challenge of capturing the mixture of hopelessness and triumph that makes the source material what it is, and plays it safe in many areas that would have benefitted from a little more daring. I’m going to return to it to finish chatting up Sasha and clear the last few scouting missions I have left, but I know after that it’ll probably never be touched again, which is a far cry from my feelings about the series itself. Attack on Titan is perfect game material, and hopefully in future we’ll get an adaptation that will try to maximise that potential instead of sticking to a fun but forgettable formula.