Sairento VR is awesome. That’s it guys. That’s the review. See ya next time.

I rarely praise games straight off the bat – preferring to meander through musings about various aspects of it before lavishing it with positivity but Sairento, set in everyone’s favourite dystopian future Neo-Tokyo, is a kinetic and intuitive romp. It implements mechanics like wall-running and double-jumping masterfully, and while you’ll do the usual amount of clumsy flailing, before long you’ll be the cyberpunk ninja that’s been inside you all this time. It could be argued that Mixed Realms have delivered a better Ghost in the Shell experience than DreamWorks did, and while the inspiration from those ballets of bullets is clear, Sairento is its own thing. You can play it as a straight game, collecting upgrades and progressing in power, or the stripped-back arcade mode which drops you straight into gameplay with pre-configured loadouts.

From a technical standpoint it comes with a bunch of options to make your time with it as fluid as possible. You can choose between the usual floating hands approach or have a full model. It’s easy to configure how this works, allowing you to set waist position for drawing your guns, and for the most part it works really well on two sensor tracking. Time slows as you move from place to place, lining up headshots and killstreaks as you go. Crouching before you land and unleash blades and bullets on enemies results in stylish slide kills which you can chain together for big points. Despite my best efforts to relegate my head turning to the analogue stick I still end up whipping around physically to shoot someone in the face only for my virtual arms to T-Rex and miss entirely. It’s so easy to get caught up in the flow of combat, egged on by killstreaks and the general sense of badass the game endows you with, but Sairento works best in a big, open room where you can turn and crouch without fear of smashing your face into a desk or taking out a wall of collectibles. 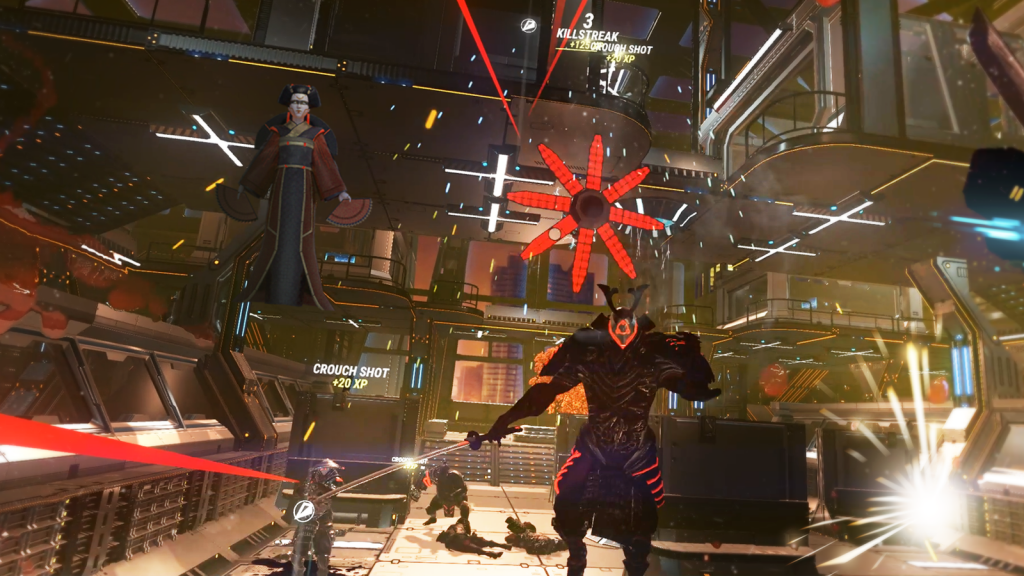 Before long the game starts piling on new weapons and upgrades which let you fine tune your character to the particular brand of mayhem you want to deliver, but I found that few felt as satisfying as the classic katana/pistol combo. With a sword in one hand and a gun in the other you can blaze a bloody trail through enemy masses, leaving chopped up torsos and exploded heads in your wake. Where a few VR shooters let you get away with standing in one spot and plugging away, Sairento feeds off of perpetual motion, and most of the time the sheer energy of it launches you past the odd technical gripe. Gun-based combat is something that lends itself beautifully to VR but swordplay is something I’m still on the fence about – it’s competent here, but the lack of feedback and hollow contact just makes it feel more like you’re waving around a Wiimote. More often than not you’ll be too wrapped up in the fast-paced encounters to worry about it too much but one day I’d like to be able to properly skewer someone with my sword in VR rather than just waving my arm at them until they fall down.

A lot of Oculus titles boil down to impressive but contained experiences involving a smaller set of mechanics. Sairento is a full fledged game built around the unique challenges of traversing a world in virtual reality, and one of the most complete good times you can have in it. There’s the technical hiccups that are just part and parcel of the whole VR package, and it’s perhaps not the first thing you want to jump into with your shiny new toy, but it’s worthy of a place in everybody’s library, rewarding skill and encouraging improvement without demanding it. Sure, you can just teleport from place to place and gun everything down, but sliding, running across walls, taking out a robot samurai with a headshot before cleaving another in half with a katana swing is too thrilling to ignore. Even when you botch it you can get back up on your feet quickly and give it another go. Enemies are fairly sharp and not so easily dissuaded of your position, which makes it easier to string together combos and put stylish attack patterns together. 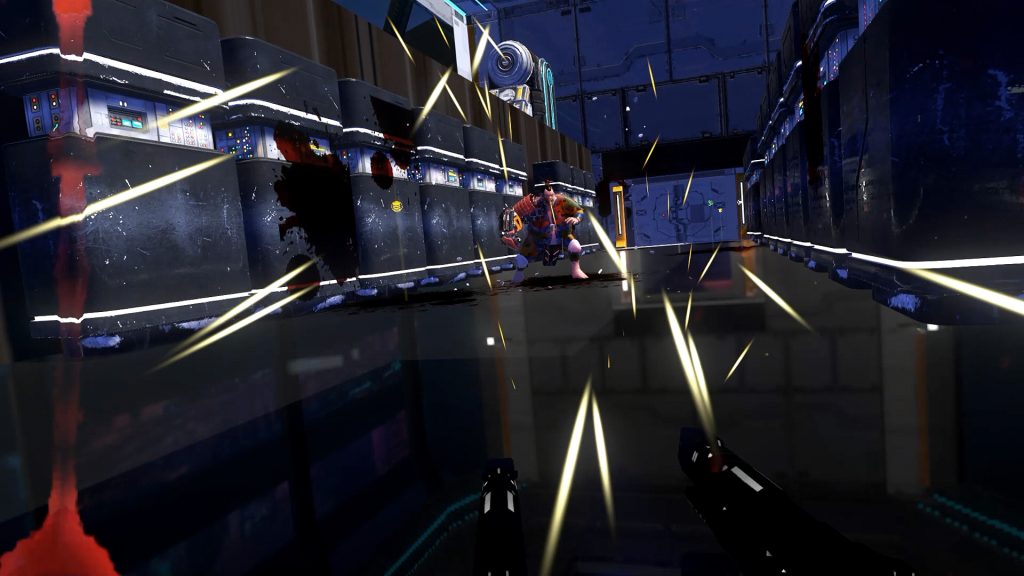 Once you’ve mastered the basics you can revisit old missions with new toys and ramp up the difficulty in increments, which makes the generous assortment of tasks infinitely replayable. The story is incidental and does the basics but certainly doesn’t leave any long-lasting impressions, which makes Sairento an amazing playground, the sole motivation being to look and feel as cool as possible. It’s sort of like a really solid takeout pizza in this regard. Amazing while you’re eating it, and out of your mind entirely when you aren’t. That’s fine – we all need a pizza sometimes – but just a tiny bit more depth wouldn’t hurt. It’s designed to be as fun and furious as possible, and it does it well in one of the best possible environments for the task so it’s difficult to level criticism at a thin story when it’s really just there to get you from one locale to the next.

Comfort level varies – navigating the world at street level is fine, it’s when you start linking together ninja moves there’s a definite sense of vertigo. If you’re demo-ing your headset to a friend it might feel a little overwhelming, but if you’ve got a bit of experience under your belt with locomotion this is a fantastic evolution. It’s marked as Intense on the Oculus Store and that’s definitely accurate, but these descriptions could always do with a few more adjectives to really get the point across, along with user descriptions of the various body parts or personal effects that have been battered and broken while they hacked their way through Japan (saying that, I messed up my hand throwing a basketball in Oculus home).

It’s one of the most satisfying games you can play in VR, and good value for the money. Go on – indulge your inner ninja.