I’ve said it before and I’ll say it again. Despite many people thinking mousepads are useless bits of kit, they’re extremely important. They can be the difference between making that headshot in time and completely missing your opponent altogether. It’s like if you’re driving a car on a bumpy road, you’re going to be all over the place and not have full control, however, if you drive on a nice smooth surface it’s almost like you’re floating on air and your journey is just that much more pleasant. So which road will the Sandberg Touch RGB Mousepad take you down?

Just look at it, it’s beautiful. The colour around the side is amazing, and it goes perfectly with the lights on my PC and my mouse. Best of all, you touch the mousepad to control the lights, which just adds to the coolness of the Touch RGB Mousepad even more. Not sure why I’ve waited this long before getting an RGB mousepad. The one thing that isn’t that cool though is the overly long USB cable. I know it’ll be different for everyone, but it does seem like there is just too much there. Would’ve been better keeping it shorter and just throwing in a free extension cable. 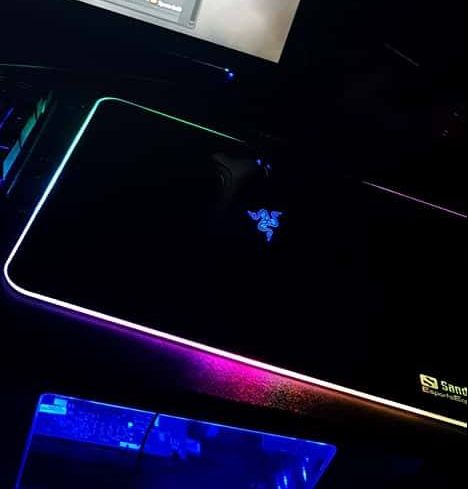 In terms of grip on the underside of the mat, it’s pretty solid thanks to the anti-slip coating. The mat doesn’t move about all over the place like me staggering home from the pub on a Friday night, although having said that, improvements could be made as it did move on a couple occasions when I was being a little more heavy-handed on my mouse. Maybe being a little more weighty would help?

The surface size is like the final bowl of porridge that Goldilocks tries at the three bear’s house; not too large, not too small, just the right size that it comfortably fits on the desk without being hidden under something, or hiding something else like a dodgy magazine. Not that I have dodgy magazines because I have the internet for that stuff. But yeah, size-wise it’s spot on.

In terms of how well the surface allows the mouse to glide across, it almost does it too well, or at least for my liking. It just seems to be too much glide and not enough resistance so the mouse moves too quickly. I’m sure I’ll get used to it eventually though.

With an RRP of £37.99 I think this is the worst bit about the Touch RGB Mousepad. Normally I can say that most of Sandberg’s products are great value for money, but personally, this does seem a little expensive for what it is. Yes, it lights up and that is cool, but it doesn’t do anything else spectacular compared to any other mousepad on the market. Unless you’ve more money than sense or you just like light-up objects, then you could be better off buying a bog standard mousepad instead.

Overall this mousepad fully deserves it’s 4/5 rating. The Touch RGB Mousepad is an excellent addition to the Sandberg EsportsEquipment range and meets the usual high standard we’ve come to expect from the Danish manufacturer. It’s by no means the perfect one out there, but I’m not sure we ever will find that so this may be as good as it gets.

If you’d like to find out more about the Sandberg Touch RGB Mousepad including where you can purchase it from, then please head to their official website by clicking HERE.