At first glance, when I loaded up Mushroom Wars 2, I thought, oh boy, another carbon copy RTS. But once I started playing it, that all changed.

Mushroom Wars 2 has a very simplistic style to its gameplay, essentially having you move troops from one building to the next until you control everything. The fast-paced action of the game and the abilities at your disposal quickly immerse you in the fight. I had not expected this game to keep me entertained for hours, but it did so without fail with the quick-paced combat and short matches keeping me hungry for more.

One thing I particularly liked is because the games are so short, there is not a lot of time to plan your attack, which keeps you on your toes the entire time. A single mistake can suddenly decide the fate of the rest of the game. I would recommend looking at your abilities before going online, this way you won’t get stomped right away like me. 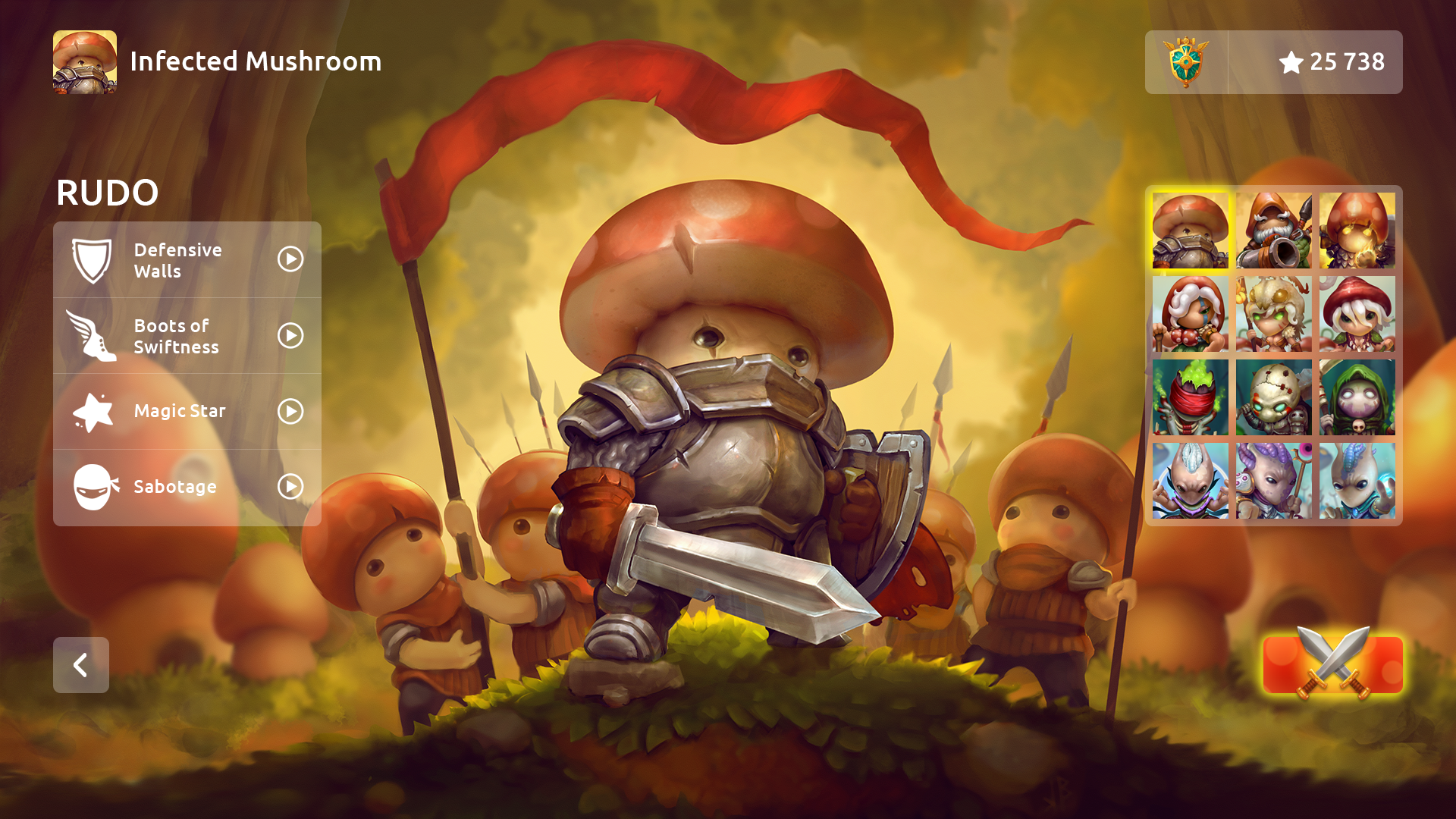 The campaign is pretty lacklustre in content but it does a nice job at introducing you to the mechanics of the game, allowing you to take other players head on without having to learn on the fly. The campaign is relatively the same thing as the online matches. However, there are few maps in the story that have obstacles such as a giant frog snatching your mushrooms with his sticky tongue. While it’s kinda cool to deal with obstacles like that, the campaign isn’t very difficult and you don’t achieve the same sense of satisfaction that you do when playing against other players in real time.

The meat of the experience of Mushroom Wars 2 lies in the online matches you can play with up to four other players. This can be done in a 1v1, 1v1v1, or 2v2 style. There are 12 different heroes you can choose from, each with four unique abilities that will totally piss off your friends and opponents.

Every hero has abilities specific to their persona that you can use in your skirmishes. These can range from speeding up your troops, turning your enemies into chickens (my personal favourite) and shrouding your troops in a fog, hiding their movements. There is just something satisfying about crushing all your buddies with the help of little mushroom soldiers. There is also a competitive online scene when it comes to Mushrooms Wars 2. I don’t think you’ll be making any prize money, but there are still leaderboards and ranked ladders to climb in this game. 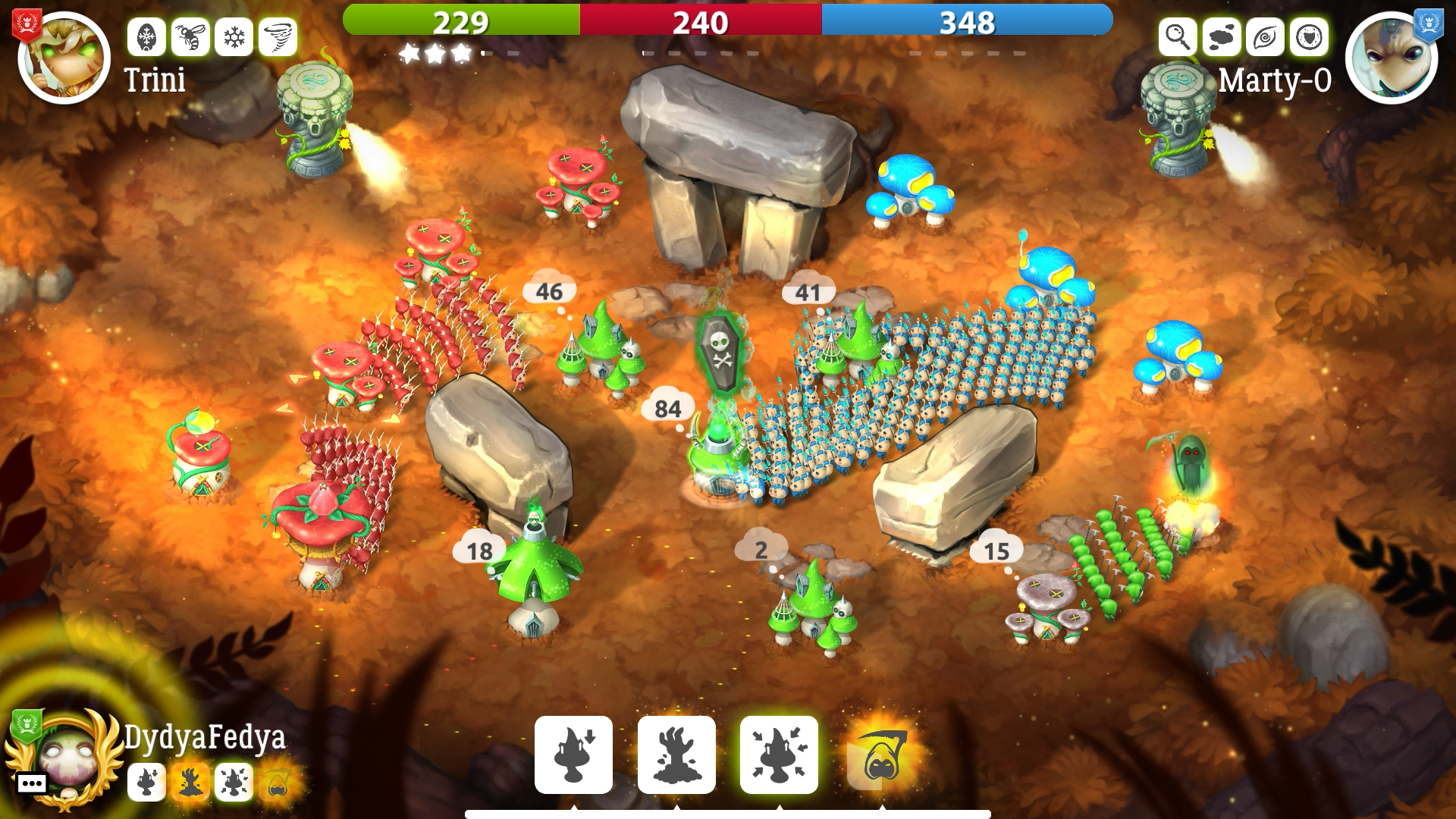 The combat system feels very fluid and does not over complicate things. You basically drag and drop where you want your army to go, and you can choose what percent of your building you want to deploy. There are over 40 different maps to play with online and three game modes; head to head, king of the hill, and capture. This might seem like a lot, but there is not enough variety between the game modes or maps to set them apart from each other. Still, it’s easy to sink an hour or so into this game with friends, because the matches are fairly quick.

As I said, the thing that Mushroom Wars 2 does the best is the online multiplayer. That being said, there really isn’t much more driving this game. When I loaded it up and started the story mode, it wasn’t more than 10 minutes into the game before I was bored and driven to play something else. This in combination with the fact that the bulk of the content in the game is in its campaign, you are really just gonna buy this for the multiplayer.

Mushroom wars 2 is a good time killer in between other multiplayer loading times or if you only have 15 minutes before heading out to work. I had an unsurprisingly fun time with the game, and I really didn’t expect to. So if you find yourself questioning this game’s merits, I say try it out. At $14.99 Mushroom Wars 2 is a little more expensive than I would like to see from a game with such little content.