It hasn’t been long since the release of Nintendo’s creative take on Virtual Reality gaming with their Labo kits, and already we’re seeing third party kits being released and taking advantage of Nintendo’s software. One such kit is the Poconic Switch Guitar.

Making use of the Labo Variety Kit software, the Switch Guitar takes advantage of the music application in the toy-con garage lab that is used to program the Variety Kit’s piano. However, with a couple of tweaks, you can go from playing piano chords to striking notes on a guitar. The Labo kit even shows you this on the kit box, although instead of a template like Poconic’s it evidences the possibility of turning your tennis racket into a virtual musical instrument. 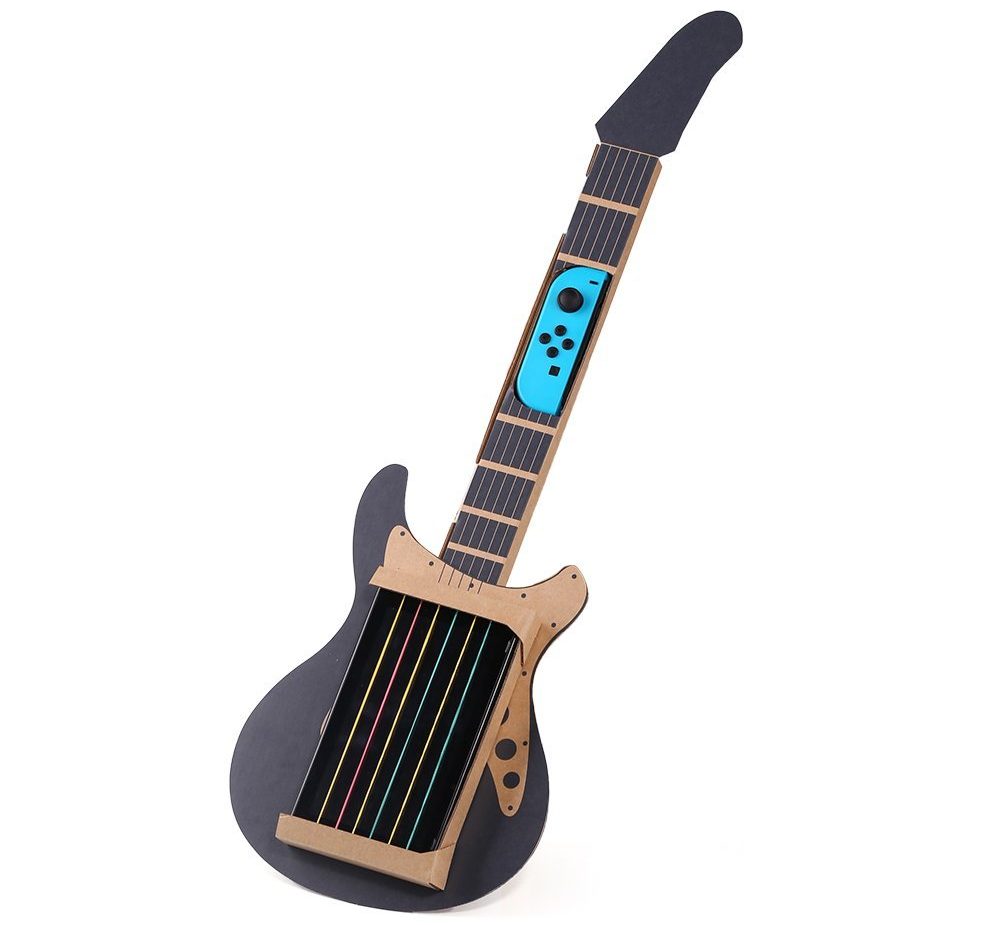 It barely seems fair to mark this on build quality considering it is made of cardboard because it can easily be crushed or broken, but there was one issue worth mentioning. Although the cardboard seemed a lot tougher and stronger than the same stuff provided by Nintendo as part of their Labo kits, there was an issue I had where the holder for the Switch itself is always open. Great in one way as the Switch just slides into the guitar, but with nothing to secure it if you’re rocking out hard there is nothing to secure it in place so it can slide back out just as easily. What is positive though is that Poconic actually offers a 12-month guarantee on the guitar which for something that is made out of cardboard is pretty great.

Much smaller in size than an actual guitar, the cardboard template is pretty simple to put together, although there was one issue during construction with the tabs. They didn’t seem to be as well designed as the ones on Nintendo kits as they lacked the same shape which has the edges of tabs latching on to the inside of the holes to stop them popping out. It’s easily fixed though if you use tape or a second pair of hands to hold things down, then you shouldn’t have many issues. All in all, it shouldn’t take more than 15 minutes to put together and that’s if you’re taking your time. If you need a little guidance, you can check out a video of us putting it together below:

Now you’ve got everything fitted, you’re ready to set up the software to use the guitar. Now, this bit can be a little tricky, so for younger gamers help may be needed. Whether you do want to go it alone or not though, you won’t go far wrong if you follow this excellent instructions video we found below. Bear in mind it is Chinese though, but the visual aid should be enough to help you get everything set up:

If you’ve followed all the steps in that video you should now be ready to rock out and can practice becoming the next Jimi Hendrix.

In terms of value for money, it’s fantastic. At only £9.90 it is clearly a lot cheaper than either of the existing kits, although that said, you will need the Variety Kit in order to actually use it otherwise you’d be stuck with just the shell of a cardboard guitar. Which also shows how good value the Labo kits themselves are because it seems some people forget that the high costs aren’t to cover the cardboard templates, but the actual software needed.

This is a great extension to the current Labo kits available and with such a small price tag you’d be almost silly not to buy it. That said, you can tell it isn’t an official Nintendo product due to the design issues such as tabs popping out and nothing to secure the Switch screen in place which may leave some people uneasy. Fortunately, it is a quick fix with some tape for the first issue and as long as you’re careful, your Switch shouldn’t go anywhere. If you do use it carefully though it can be a lot of fun, and if you get your friends round and have them on the piano and you on guitar, I can’t see why you wouldn’t be well on your way to becoming the next big thing in the music charts.

The Poconic Switch Guitar is available on Amazon now for £9.90 (price correct as of 22/05/2018). You can click on the link above to be taken to the same seller we bought ours from but we’d like to inform you that we may earn monetary compensation for any purchases made through the link.