When the World Cup was starting, we wanted to make sure we were watching the games in style. So what better way to do it than projecting the games onto a massive screen on the wall? Well, thanks to our new LESHP projector, we were able to do just that. But did it match up to the displays England put in this tournament or did it flop much like Brazil, Germany and Spain?

It’s always risky buying from an unknown brand, especially when splashing out a lot of money, but we were surprisingly impressed with what we got when opening the projector box. Well packed, the projector casing in its gloss black casing stared at me, and we had a moment where we appreciated each other’s beauty, or at least I’m sure it would have if it wasn’t an inanimate object. As nice as it looked though, it didn’t feel like the most secure casing in the world. Which was surprising because it had a decent weight to it but there was just something about the feel of it when picking it up that felt kind of cheap. The complete opposite of what I feel when picking up my Epson TW5100 projector, although maybe that is to be expected when you consider there is over £500 difference in price.

The size was quite bulky as well compared, measuring approx 33cm wide x 12cm high x 25cm deep which isn’t as wide as my Epson, but is bigger in every other way. The rest of the design was pretty similar to most other projectors on the market with buttons on the top, ports at the back and the lens on the front with a couple wheels to manually adjust focus and verticle keystone correction. The wheels, however, are a little stiffer than you’d expect, but I’d put this down to it being new and over time would hope to see them become more manoeuvrable. It even comes with a nice detachable rubber cover for the lens to keep it protected when not in use. There are also a number of vents to the side to allowing for heat dissipation, which is great because them projectors do get hot with extended use. 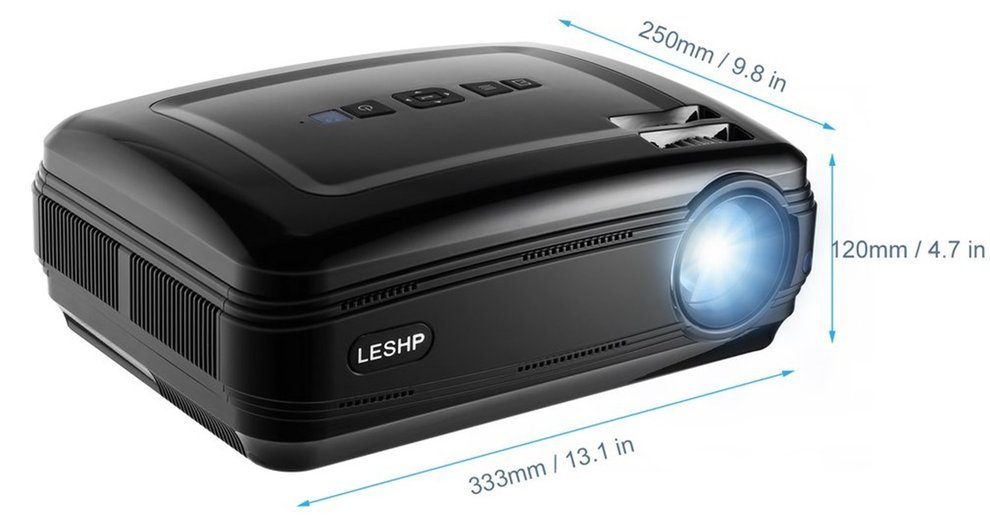 When it comes to the audio and visual quality of the projector, it again surprises especially compared to more expensive models. For example, the LESHP has a brightness of 3,200 lumens compared to my Epson’s 1.800 although that doesn’t quite define the quality of the image outright. Both can show full 1080p images, and although a lower output the Epson’s software does actually make for a better image due to having a 13,000:1 contrast ratio compared to the LESHP’s 3000:1, and not only that it can create a bigger one too, being able to stretch to 300 inches compared to the LESHP’s 200. Still, having watched a whole host of football matches, movies and my favourite TV shows, I can say that its still great quality, and works in all levels of light, although admittedly it is better the darker the room you are in.

The LESHP projector however actually beats the Epson on audio quality, packing an excellent quality 3W high-fi speaker with built-in amplifier. The sound can be on full volume and not a crackle. Compare that to my Epson which not only packs a smaller 2W speaker but also struggles for clarity even on the lowest of volumes, with all sound coming out of it crackling and sounding tinny, meaning if you want to enjoy your experience you require an external speaker to plug into it.

This is probably the area that lets the projector down the most. It does have some great features such as vertical keystone correction, meaning you can place the projector on the ceiling or floor for example but the image portrays on a screen as flat and level, as opposed to being bigger at the top than the bottom or vice versa. What it lacks though is the ability for horizontal keystone correction, meaning that you can put the projector in the corner of the room, and the screen will angle itself so as to remove any imperfections or stretched sides. It also expects you to do all this manually, whereas more expensive projectors have built-in software that can autocorrect to help you out. Not really a necessity, but great if you ceiling mount the projector which may cause you to struggle to get to it so you can adjust things. That said, many settings can be changed using the included remote control.

Other than that though the projector has a lot of stuff covered such as presets that change things like contrast and other visual settings to optimise them for sports, gaming and so on. It also has a whole host of different ways you can connect stuff up to it from HDMI to VGA and USB which can detect multiple file formats, both audio and video. The only thing it lacks is a wireless connection or bluetooth, although that’s easily fixed with a couple of adapters, and even the more expensive models don’t always come with this. 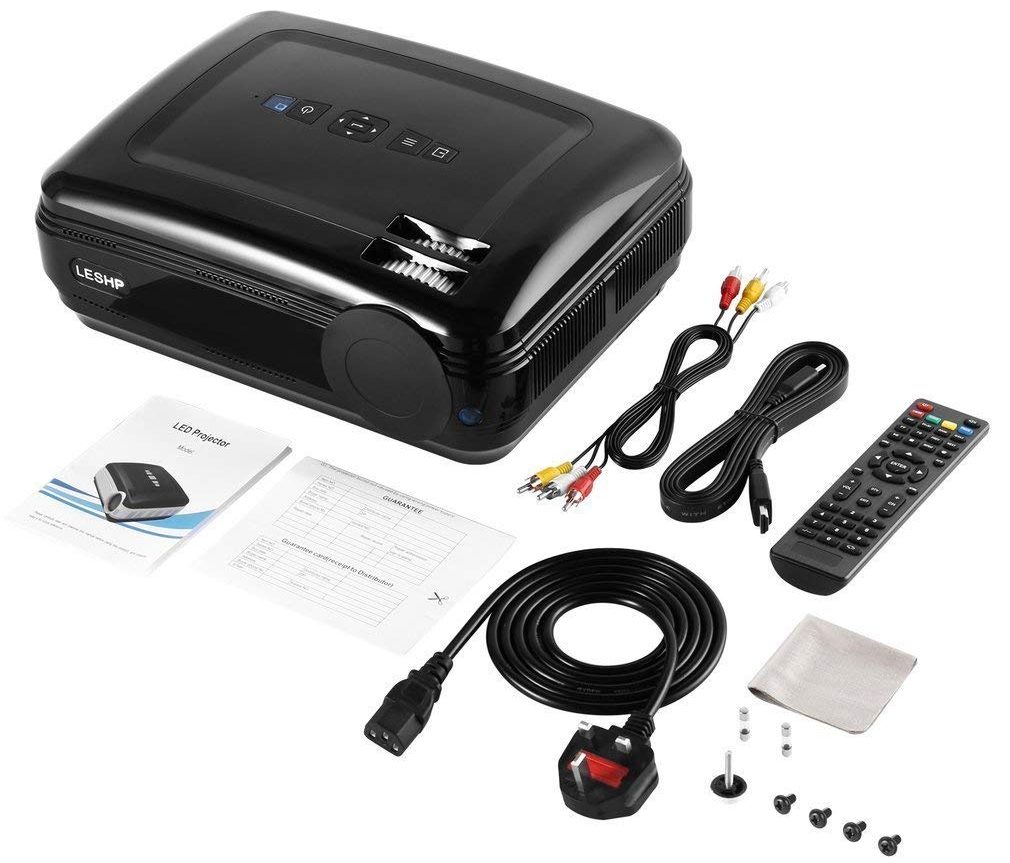 Well, it packs a bigger punch than a projector that is more than triple its cost in terms of audio, and although it’s native resolution isn’t full 1080p it can reach it, and still provides a crisp image even on lower resolutions. It comes as a bit of a shock in all honesty that compared to some more expensive models it competed extremely well and it even comes with a few bits and pieces that my Epson didn’t offer up, which I luckily got it half price in a Black Friday deal a few years ago so I didn’t get totally ripped off. But considering the low price of the LESHP I’d say you’d struggle to find better quality for the price you’re paying. The only thing that lets it down in terms of value is you only get a 1-year warranty which many other manufacturers beat, some even offering up to five years.

For a budget end product, the LESHP LCD Projector is insanely good. It may feel a little rough around the edges, even bulky and cheaply put together, but having a decent audio and visual output compared to some more expensive models, it’s excellent value for money. That said, it does lack some features which would be handy such as horizontal keystone correction but you get what you pay for, and if you don’t want to splash the cash too much, this is ideal for both indoors and outdoors, for movies, games and more.

The LESHP LCD Projector is available on Amazon now for £169.98 (price correct as of 12/07/2018). You can click HERE or on the link above to be taken to the same seller we bought ours from but we’d like to inform you that we may earn monetary compensation for any purchases made through the link. If you enjoyed this read and want to check out more of our gadget and peripheral reviews, click HERE.