Bush Hockey Legaue is a lot like a young hotshot player; from the outside, it looks fantastic and it has buckets of potential, but ultimately, it falls short of delivering anything special. What the people at V7 Entertainment wanted to do with this game was create an aggressive hockey game that had that retro feel, that allowed you to play games the way they were meant to be played, sitting next to your best friend as you pummel his face in….on the game of course. And to an extent, they have done some of that but fell short in terms of the quality that was probably needed to make this game a big success.

Set in the late 1970s during a time of economic uncertainty, Bush Hockey League follows a team that is currently down on its luck and is fighting for their very survival. As they start to lose fans due to poor recent form, the players run the risk of losing their jobs and so it’s up to you to try and turn this around. The story itself is probably one of the better parts of the game in all honesty. It really gets you to buy into your team and during loading screens, you’re given a history of the club and how it got into its current state which was a nice touch. But it’s leaving the story and entering the gameplay where the game begins to suffer.

Now, by no means am I an expert at Hockey games, but I have played a lot of sports games in my time and the one thing that all the good ones do well, is they give you a tutorial or training before placing you in an exhibition game. This not only helps determine your skill level when playing against the computer, it also allows you to integrate with the game better by gaining a better understanding of the controls. This, Bush Hockey League doesn’t do. Yes, you get thrown into an exhibition game, but the only help you get is a bunch of instructions on what buttons to press to do what which isn’t as helpful as it sounds because I just spent most of my time in that initial game skating around like a headless chicken and losing by a scoreline I’m too embarrassed to mention.

Winning isn’t the most important thing though and you do learn that in the game’s story mode where rather than going out for victory, you’re set objectives you have to meet instead. Things such as taking out a certain player (which can reward you with a collectable trading card), preventing the opposition from hammering your goal with shots, and also making sure you win your fights (probably the only time controls work well). Winning games does make an appearance on these objectives too, but it’s more about showing hard work and determination on the rink to keep fans happy than winning everything all the time. 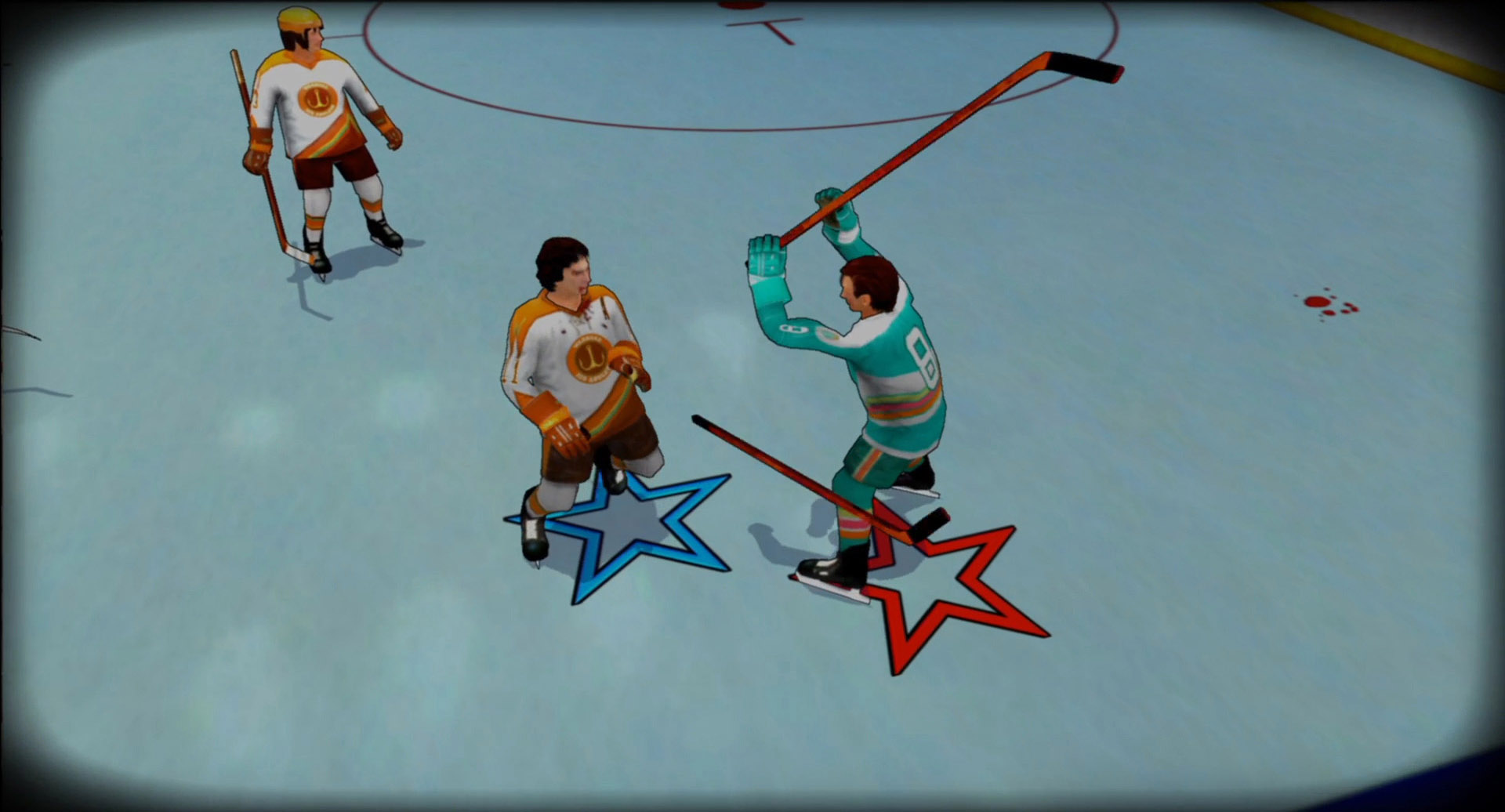 Getting back to gameplay, there seem to be, well I’m not sure if bugs are the right word, but certainly poor mechanics. You’ll lose the puck and be trying to skate back, and for one reason or another my controller doesn’t switch player when I want, and instead, I’m stuck with someone up the other end of the rink and a defence more useful than a chocolate teapot. Not just that, but when it comes to tackling, it doesn’t matter which controller set-up I use, it seems hit or miss whether it registers properly and lets you put in a challenge. I know I’ll never win them all but you’d still expect it to try and let you get a stick in there. After several losses though, you do start to get the hang of it a little more, but I can’t help but get infuriated when nothing works. It’s ok when playing with friends, but when you’re losing 9-2 to the computer on the Rookie setting, I have begun to seriously consider moving abroad and changing my identity.

It isn’t all bad though, as the game does stand out well in one key area, how well it encapsulates the 1970s. With a real retro feel to everything from the player’s afros to the hideous 1970s colour scheme, the sound effects on the menu’s and the soundtrack playing in the background, it really does give off the right impression for a game set in the 1970s. It even has the right kind of humour in there too with player’s names like Dick Lager and the mentioning of boobies, just like the good old days before everything became too PC, just how I like it. 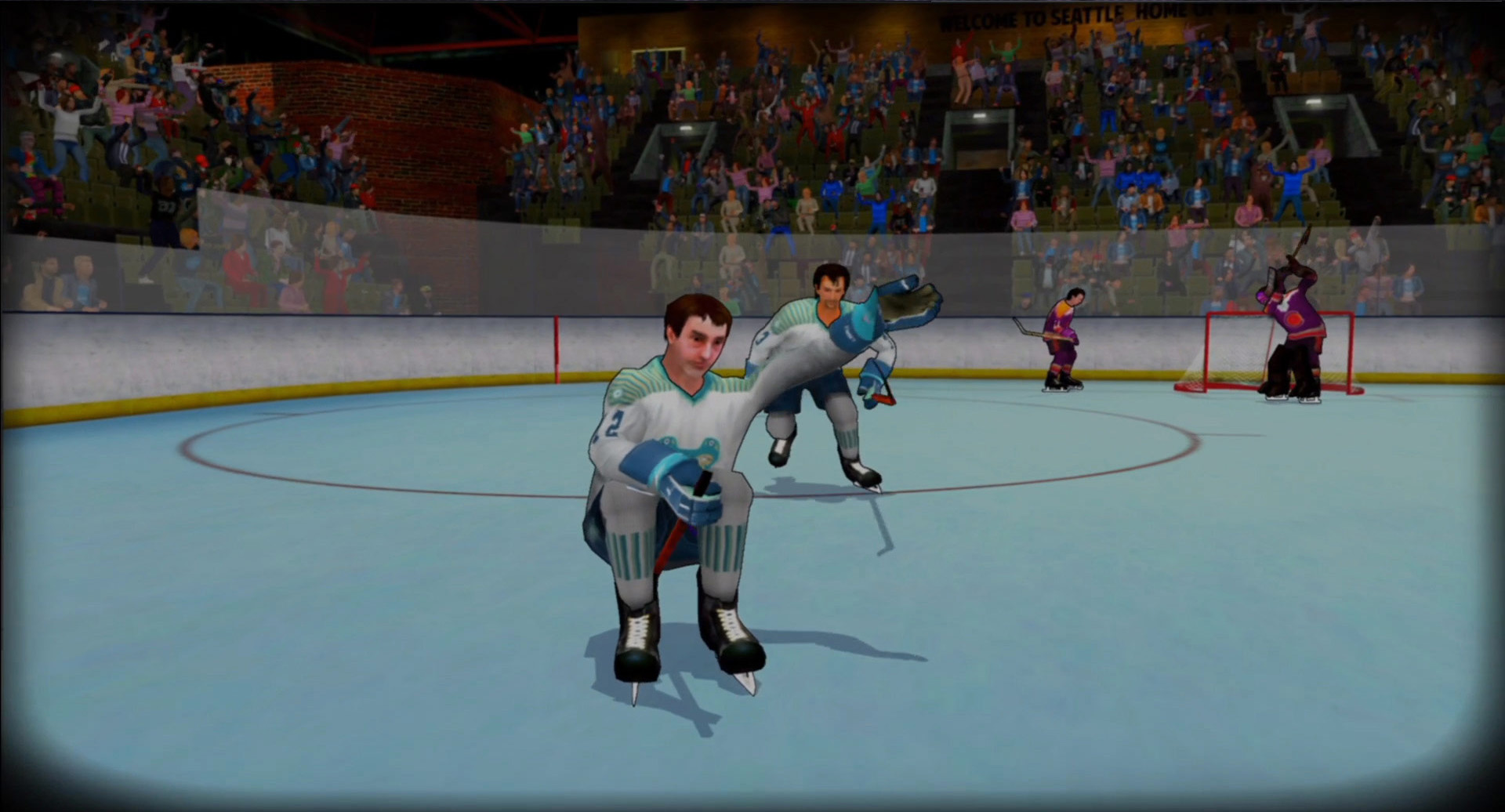 Overall though, the enjoyability of playing this game wasn’t as high as I hoped it would be. With more finely tuned controls, the introduction of a proper tutorial or training, and maybe even adding something like a sprint button so it isn’t all one constant speed, this game could be great. Instead, it fell short and didn’t deliver the experience that we so badly craved. It had the right amount of blood, guts and humour, it just needed that little something extra. Still, it is a solid foundation for a great game idea and although a port to the Switch was cancelled for Bush Hockey League, I’d like to see the developers carry on with this game and take it to the next level.