The only thing worse than planning a lovely meal only to accidentally burn it in the oven is when your dinner runs away before you even get a chance to stick it in there. That’s what happened to Hermes the chef in the 2D jump n’ run platformer that goes by the same name. One day he decides to grill up a tasty treat, but, being a professional chef Hermes wasn’t going to pop down to his local Aldi to get a readily prepared bird. Instead, he fancied some farm fresh chicken, but his soon-to-be dinner had other plans and made a break for it. Determined not to be beaten by some farm critter though Hermes makes his way through 32 levels visualising that mouthwatering feast that awaits him. 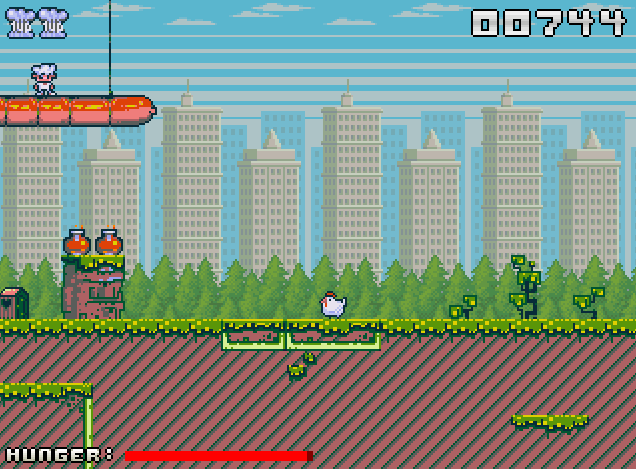 The idea is, like most 2D sidescrollers, you go from one side of the level to the other as quickly as you can whilst collecting as many items as you can. Where in Sonic, for example, you’d collect rings, in Hermes you collect doughnuts and what seem to be little red vials of God knows what. Doing this not only earns you points to help you set a high score better than your friends, it also fills your hunger bar.

The hunger bar is important as it’s almost like a level timer. If you don’t collect the delicious food items then it leads to an empty hunger bar which makes for a not very happy Hermes. Keep your hunger bar nice and full however and Hermes will happily carry on to rest of the level. The issue is, if you eat lots you’re going to need to poop. Luckily, there are toilets scattered through all the levels so you can relieve yourself. The importance of this will show when you get caught short and it means that you crap your pants, lose the chicken and a life in the process. Once you get to grips with making sure you’re keeping Hermes fed, you’ll also have to deal with dodging enemies and making sure he doesn’t drown as he makes his way through treacherous waters. 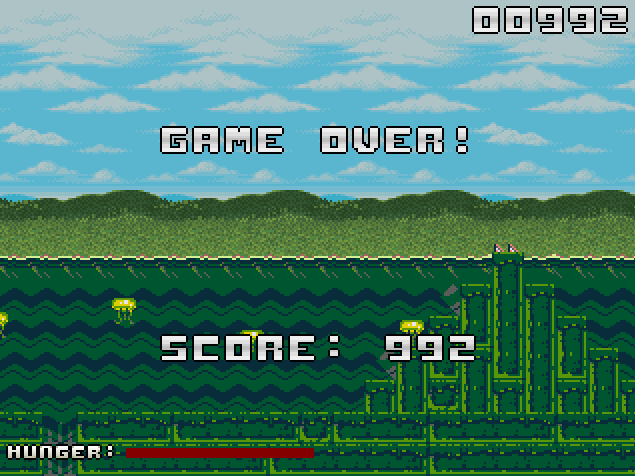 Once you get to grips with what it is you have to do and the best way to navigate the levels, you can begin to appreciate the retro style graphics which have been put together using hand-set pixels. Using a simple design and colour scheme, the game feels very much like your more classic sidescrolling platformers from the 80s and early 90s, although with a splash more colour and slightly better detail. The soundtrack to the game also ensures the game still has that retro feel to it as well, having been put together with Amiga chiptunes.

The best part of this game though is that it’s free to download from the Retroguru website, and not just on PC, but formats like Android and the Nintendo 3DS as well. That said, you can still buy a copy of the game in a physical format which is what we were kindly sent. The physical copy contains the soundtrack to the game on a CD, which will also work in a Sega Dreamcast and on top of that you also get an awesome comic book story of Hermes and his adventures chasing the chicken he desires to feast on. Definitely worth every penny of the €15 that they charge for it. 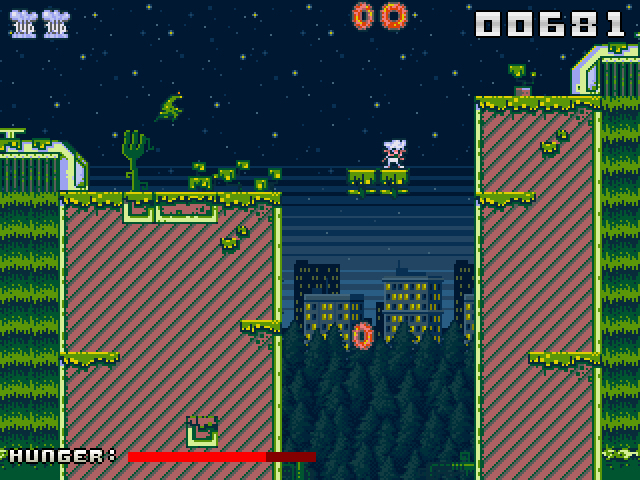 Still, it’s not a perfect game, there are some bugs here and there but nothing major. My biggest pet peeve though is that despite such an awesome comic book that comes with the physical copy, there isn’t as much emphasis on the story in the game itself. Plus some things aren’t explained very well such as needing to poop all the time and what the little red vials actually are, so I think the game could maybe benefit from some kind of tutorial level that just explains different things throughout the game.

So to summarise Hermes is a solidly made game that the developers can be proud of. Graphically the game hits the nail on the head and the soundtrack complements it perfectly. The challenging levels and bosses really make sure this isn’t just a 5-minute game that bores you and you put it down before you’ve really gotten into it. That said, replayability isn’t fantastic and you may find once complete, you may never pick it up again because it’s not mind-blowingly amazing that you’ll spend 40 hours on it over a weekend. Don’t get me wrong, the score tracking is a nice touch but it just doesn’t encourage me to go back and beat my previous scores, but maybe if it was a global leaderboard it’d be slightly different. At the end of the day though, you don’t have to pay for this game so what you get is excellent value for money, and that even goes for if you do end up splashing out on the physical copy too.

Hermes was created by Retroguru and can be downloaded for free on various platforms by clicking HERE. If you’d prefer to get your hands on the physical copy like us, receiving a physical CD and comic, you can do so by purchasing it HERE.