If you ask anyone who knows me they’ll tell you I’m a lazy bastard; a nice one, but still lazy nonetheless. That’s not always a bad thing though and I think Bill Gates put it best when working at Microsoft stating;

I’m no different. Whether it be that I’m given a task at work or I have to do a job around the house, I’ll work out the least strenuous way to do it so I’ve more time to sit and do nothing but relax and enjoy myself. Nine times out of ten that means tricking the family into coming to help in return for food.

One way that life has been made that bit easier, not just for me but for the world in general, is the introduction of smart devices around the home, the most popular of which is probably the Amazon Echo. Unfortunately, we don’t have one of those to review today, but we have got our hands on a Koiiko smart plug.

Opening the box revealed a sleek looking white plug, similar to timer plugs my grandparents used when they went on their holidays which would automatically switch lamps on to simulate someone was living there when the house was empty. The casing feels solidly built, but it’s a little too bulky for my liking. They measure 2.36″ wide, 3.74″ tall and the depth states it is 1.18″ but that’s just for the main housing of the plug, with just under an extra inch of plastic on the front and back of the plug where the pins to plug into the mains are, and also where the pins from your device would plug into the smart plug. Otherwise, there’s nothing else I can fault on it. 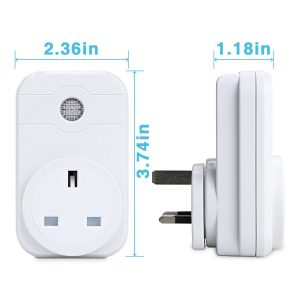 In terms of setting up the plug, it’s so easy. You just download the eFamilyCloud app, plug the Koiiko smart plug into the mains and go through the setup wizard that will link it up to your WiFi network. Once that is done, you just label the plug for what you’re using it for, so for me, it was the TV. The plug will then appear in the apps menu, where you can switch the plug on and off. Click on the device name and it will open another window that will allow you to set a countdown (essentially sleep mode) and a timer for you to set the plug to come on and off at certain times of the day.

Personally, this plug just means I don’t have to get up to switch things off, I can just go on my phone instead and tap the screen. But, if you have an Amazon Echo or Google Home device set up, you can link these devices together so you can be even lazier than I am and just shout “Alexa! Turn the TV on.” and before your eyes, the TV will just power up making you feel like some kind of God. It isn’t just your TV though, you can also add lamps, kettles, washing machines and any other household device up to 2000W. One ideal use for this is if you’re often worrying that you’ve left the iron or hair straighteners, plug them into this and if you’re at work and the panic sets in, you can just simply check your phone, and if it is on, either turn it off and hope the house hasn’t burnt down yet or leg it home to make sure you’ve actually got one to go back to.

The only downside for me though is that you’re constantly having to leave the plug on to actually use the smart plug, which means you’re always using electricity. It’s not the most power draining device, in all honesty, being given an A energy rating, but if you’re one who likes to look after the pennies so the pounds look after themselves, then this isn’t ideal. 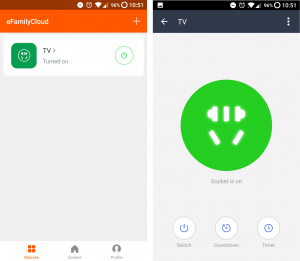 So it certainly does a job, but is it worth it? The cost of £16.99 on Amazon is reasonable compared to its competitors, being bang in the middle of most of them. There are obviously cheaper models out there, but I think if you’re looking to create yourself a Smart Home, then it’s an ideal buy especially as it also works with extension leads making it ideal for gamers who can either switch their TV/Consoles or PC/Monitors off at the push of a button. However, there is an ongoing cost having to leave the plug on to use it even if it is only minuscule. 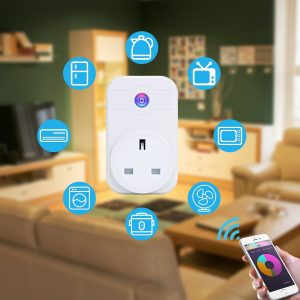 So, overall opinion? Well, it’s definitely something I’m glad that I’ve purchased and its ability to pair with an Amazon Echo has given me more weight behind my argument with the Mrs that we need one. It comes in really handy, not just because I’m lazy, but like I say if you’re out for long periods of time, you can switch lamps on and simulate that someone is in the house, acting as a deterrent to any would be criminals. It’s built well, looks nice too, just a little too bulky to fit behind our couch, but in an open socket, there are no issues what so ever. Definitely encouraged me to start making my home a smart one.

If you wish to get more details about the Koiiko smart plug or to purchase one yourself, then you can find it on Amazon HERE. We get no commission for referring you to this product.