In what has been a shock to many, YouTube has this morning adjusted their monetisation programme, in which content creators partner with YouTube to make money off advertisements shown on their videos. The new rules state that in order to remain partnered with the media platform, they must have a minimum of 1,000 subscribers and over 4,000 hours of watch time in the past 12 months. Those who were affected will have received a similar email to the one below which has been shared by its recipient across social media. 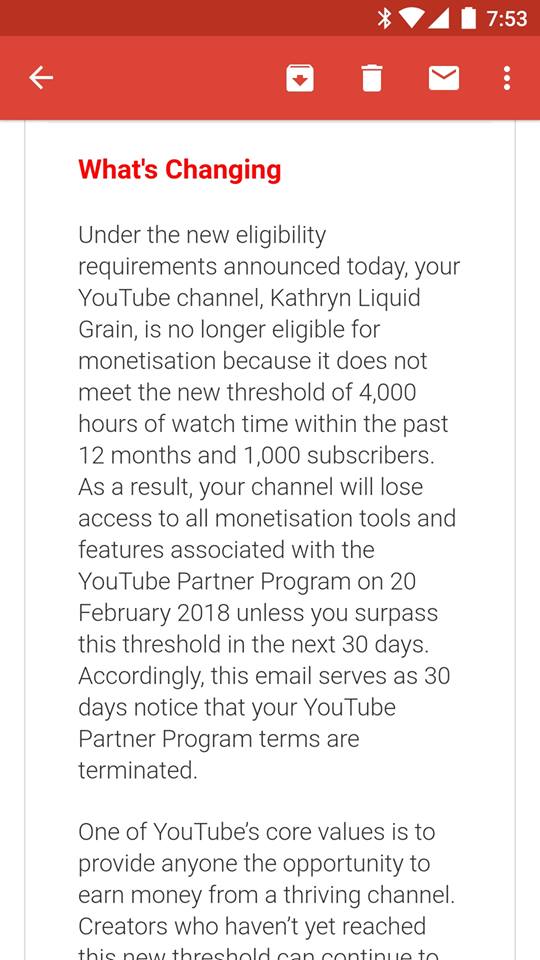 The reason for these changes hasn’t been revealed exactly as yet, but there have been rumours for some time that something was going to happen. Many on social media though are linking the timing of these new rules to the Logan Paul suicide video which has been in the news recently. But what is upsetting people more, is although YouTube may look like they’re trying to show that they’re making every effort to control the content on their platform so people can’t make money off such videos again, it isn’t actually affecting big YouTube stars such as Logan Paul, and instead is punishing smaller content creators who feel they have done nothing wrong.

By no means is YouTube actually stopping small content creators from doing what they do, they’re just preventing them from making money so easily. But, it could potentially see many people leave the site and start looking for other sources that allow them to upload and monetise their videos. I’m sure the next few days will see more backlash, but only time will tell what kind of impact this has on the industry.

If you’ve been affected by the news yourself, why not tell us your thoughts and feelings on the matter in the comments below or on our social media pages.