We Happy Few gets a Clockwork Update

A few highlights from the We Happy Few patch notes:

• All encounters should now be completable.

• Faraday should no longer be capable of blocking your progression. This is so important that it deserves its own line in these notes.

• Faster save/load times: As a consequence of the new quest state/save systems, autosaving is now significantly faster, and loading is faster too.

• Conversation mode: When talking with an encounter NPC (eg someone with specific dialogue and purpose, rather than the systemic NPCs), you will now enter conversation mode.  Little black bars will come down around you, and you will effectively be isolated from the outside world while you talk to them.  This means we can place better animation with the VO, and quest givers can’t be interrupted by other NPCs, or you, or them.  Aka, the game won’t lose the plot as much any more, and it’ll be slightly better more cinematic.

• Puppet system: NPCs can now have highly scripted behaviour, instead of their normal systemic behaviour.  The puppet system allows us to remove their systemic brains and give them specific actions to do, rather than having the two systems fight (which led to all manner of crazy shit).

• Tea Time and Lovebirds have been removed for now, because they were not good enough.  We will rebuild them.  Better.  Faster.  Stronger. 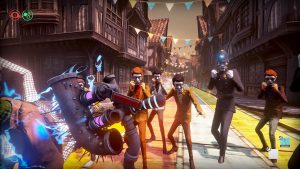 And, the one we’ve all been waiting for since seeing that first trailer:

• The can of grapefruit juice in White Tree Park can now be picked up.

Bear in mind that being early access your earlier saves will now be inaccessible.