RAVE Reviews: The Killing of a Sacred Deer

Welcome to the first piece from RAVE Reviews. This will feature a one of a kind movie titled “The Killing of a Sacred Deer”, produced by indie company A24 and directed by greek mastermind Yorgos Lanthimos. A24 is becoming very renowned very fast for its amazing movies, and this one is no different. The movie is a mix of emotions which will have audience hooked from beginning to end, and will make you unwilling to even blink until it’s over.

The setting of the story is a very tranquil one. The protagonist, Dr Stephen Murphy, is a surgeon with a pretty ordinary family; a beautiful wife and two children who both have personalities of their own. This peace slowly starts to fade away when a new figure, Martin, begins making more frequent appearances alongside Dr Murphy. First at the hospital and then increasingly throughout Murphy’s everyday life, Martin looks to have more than a simple interest in Murphy. Going ahead in the movie, as Martin is also invited to the Murphy house for dinner, he finally confesses his big secret to Stephen, who given the ridiculousness of it, refuses to acknowledge the boy’s statements. That is until one of these prophecies starts to become true. For the sake of spoiler avoidance, we will now delve into what makes the move as good as it is, and not recount any more plot transcripts. 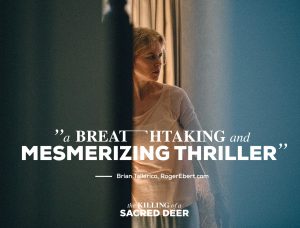 What makes the movie stand out compared to other Horror movies is the level of eerieness and suspense which is instilled in the viewer. As mentioned before, this movie brutally hooks you from the start of the action until the end. Initially, the movie looks a little boring and is a bit slow to pick up the pace, as it shows pages from the everyday life of the Murphy family, including a creepy arousal ritual to stimulate sexual behaviour from Stephen and his wife, Anna. As soon as the action picks up, people will start questioning themselves what is happening on a very frequent basis, as the story becomes more convoluted with each minute that passes. It peaks on more than one occasion, to then revert slowly to a situation which, although still incredibly creepy under normal circumstances, is perceived to be normal by the audience, given how weird the story is getting. These situations almost also provide relief, a breather, to the viewers, which is in itself curious as very rarely a movie manages to instil such disturbing images and manage to almost relieve the people watching it.

As one can even tell by watching the mere trailer, which is a masterpiece as usual by A24, the movie definitely is something else in the world of creepiness. As unsettling as it is, the vocal rendition of “Burn” is perfect with the flow of both trailer and movie, and gels it together insanely well. The trailer goes over the plot of the movie very well and will make you even more curious to watch it, which is something I definitely recommend. I also recommend that if you are faint of heart, proceed with caution as this will drive your heartbeat through the roof.

The movie itself is an amazing example of how to direct a chilling movie. It consists of all the ingredient to keep the viewers glued to the screen. The only “downside” of the movie, if you can call it that, is that the ending is weird. Not the creepy kind of weird which is seen throughout the movie, but weird as in strange.