Square Enix have today unveiled a series of tutorial images aimed at helping players get more used to the controls in upcoming brawler Dissidia Final Fantasy NT, the three versus three fighting game co-developed with Team Ninja from KOEI TECMO, famous for the Dead or Alive series. These battle guides are mainly there to increase hype for the game, but also to help gamers passionate about this game and who cannot wait for it to release to study these guides as they provide a deep overview of how the basic mechanics of the game will work. 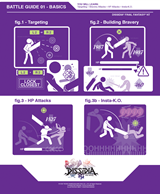 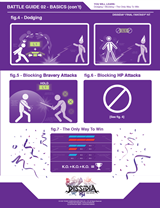 Moreover, Square have also unveiled a trio of characters which fans of the series will be overjoyed at their reveal. These are Warrior of Light, from the very first Final Fantasy title, the most famous character in probably all of Final Fantasy, meaning Cloud Strife from FFVII, and Lightning from the very divisive Final Fantasy XIII. These are only three of the over 20 playable characters in the final game, which is coming out next year.

Dissidia Final Fantasy NT will be releasing exclusively on PS4 on the 30th of January 2018. Hardcore fans of the series or of the first title in the series will be eager to learn that an Ultimate Collector’s Edition is available to pre-order exclusively from the Square Enix Online Store, including a Warrior of Light bust figure, a soundtrack featuring 15 songs from the game, an 80-page hardcover artbook and a season pass, giving access to post-launch content. This will set you back a good €200.00, so think about it before splurging that much cash on a game. I know I should.