Cliché at the Cinema: Ready Player One review

It has been probably 14 years since I last stepped into a cinema building, let alone the theatre itself, but I was really eager to watch Ready Player One in 3D. I had read the book in 2015 and ever since the movie was announced, I had been expecting the day I would see the Oasis come to life. Knowing Steven Spielberg was at the helm of such a production only continued to add to my anticipation of the movie, and having Ernest Cline, the writer of the book, as co-producer only made the hype for the movie bigger. While the movie did deliver, it fell into the old cliché of “the book is better than the movie”.

First things first; the movie is AMAZING. Go watch it whenever you can, I thoroughly enjoyed it from start to finish. The fact that there were 7 people including me at the cinema may have influenced how much I liked the movie, but in all seriousness, it’s a blast. It’s been a week today since it released, so you have the time to go. It has good acting, it has great CG, animations are on point, the dialogue is not cringey( except for maybe two or three lines in the whole script; “MY MOTHER’S SISTER”) and the story does make a little sense. Having all these elements in a movie with gaming at its core is not very common, so once again I will urge you to go see the movie. As a general introduction to the movie, Wade Watts, a teenager living in the caravans of the future, lives “with” his aunt and her boyfriend of the time. There is no real connection between the two other than being from the same family tree. This is mainly because his aunt could not care less for Wade, and the same could be said the other way round. Wade spends most of the time navigating VR, which is so common in 2045, the year the movie is set in, that you could say it was the generation’s PC. More than VR, Wade and millions of others spend their time inside the Oasis, this virtual world where you could be anyone or anything you wanted. The main story of the movie is the chase for the Golden Egg which James Halliday, creator of the Oasis, left in the game. Whoever finds the egg will gain control of the whole Oasis as well as his share in Gregarious Games, the company which owns the Oasis. 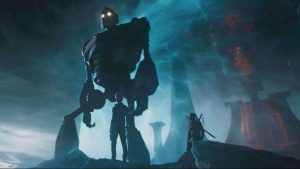 The beauty of the movie is right in the core concept of the story. Everything is done so well; the characters, the locations, the characters, the missions and items – it really feels like you are in a game. Portraying this feeling was probably the hardest thing for the production crew to do as everything has to be on point, which they brilliantly succeed in making. The movie is also DRENCHED in 80’s references and features, such as music, easter eggs and other stuff in the movie. The story itself is based on clues from everything 1980s, which was Halliday’s teenage and coming of age years. And while the movie perfectly mirrors the book for the references to the 80s, it drastically changes the majority of the big moments from the book, without any actual reason.

I will not go into a lot of detail into what was changed, but taking the example of the first key, the whole scene was totally different from the book. One cannot really say that this was done because of lack of funds as the way they chose to proceed with the movie probably ended up being more expensive. It certainly makes it much more dramatic but the way it originally was written makes loads more sense in the context of the story, and also would have saved a cheap trick used later on in the movie. To avoid any misunderstandings – the scene in the movie is spectacular to behold, meaning it makes for a better movie having used this instead of the original scene.

I do not want to sound like I am ranting, as this was just what I personally think of the movie. As I have stated before, the movie is sick and anyone remotely interested in video games, technology or even computers should watch it as I am sure they will like it. Having read the book and fallen in love with its story though, it just hurts knowing that the movie and the book are supposed to be the same thing. It even boggles my mind how Cline, the author of the book, was co-producer of the movie and approved all of the changes from book to movie. At least it was great to watch.

Ready Player One is probably the best gaming movie I have seen, as it has all the elements which make up an amazing game, inside a movie. Anyone with the least interest in computer or media has to watch it, it’s that good. However, I strongly recommend for those who read the book to forget about it for the duration of the movie as there are some major changes from book to movie. If you still have yet to read the book, on the other hand, I’d seriously suggest watching the movie before.