And you thought they were cute: Hangry Bunnies from Mars review

We found ourselves in possession of a code for the VR game Hangry Bunnies from Mars by developers Studio229 and Hammer-On and who better to give it to than our good pal VRMETOKYO. Check out what he had to say about the game below or if you’ve no time for reading, head straight to the bottom to check out his video review.

Ever wanted to save the world from invasion, work for former KGB as a special agent clone, or perhaps you just want to win an anchovy pizza? Hangry Bunnies from Mars has you covered!

Lock and load your generic untitled named weapon, the “G.U.N” and stand tough against the hordes of bunnies that invade your vibrant city. However, these bunnies are no ordinary fluffy creatures. At first, they may seem pleasant, cuddly, even adorable one might say, but let them get into hugging range and a combination of hunger and anger takes hold. The adorable bunnies transform into “hangry” bunnies, a sporadic bouncy creature with no concern for your well-being. Of course, they may also be antagonised to “hangry” if you shoot them.

You have the chance to accumulate two other weapons to fight off the two faced vermin. The “Rabbit Reaper” a rapid fire machine gun that you’ll use to give your trigger finger a rest, and the “Vermin Vac/Hare Heaver” a combo of two weapons; one sucks up the bunnies for ammo and the other launches them out as grenades. At some point, you will need “Hare Heaver” just to stay alive, as your ability to crowd control with it will be essential. Let’s just hope you can rack up enough points to unlock it quick. 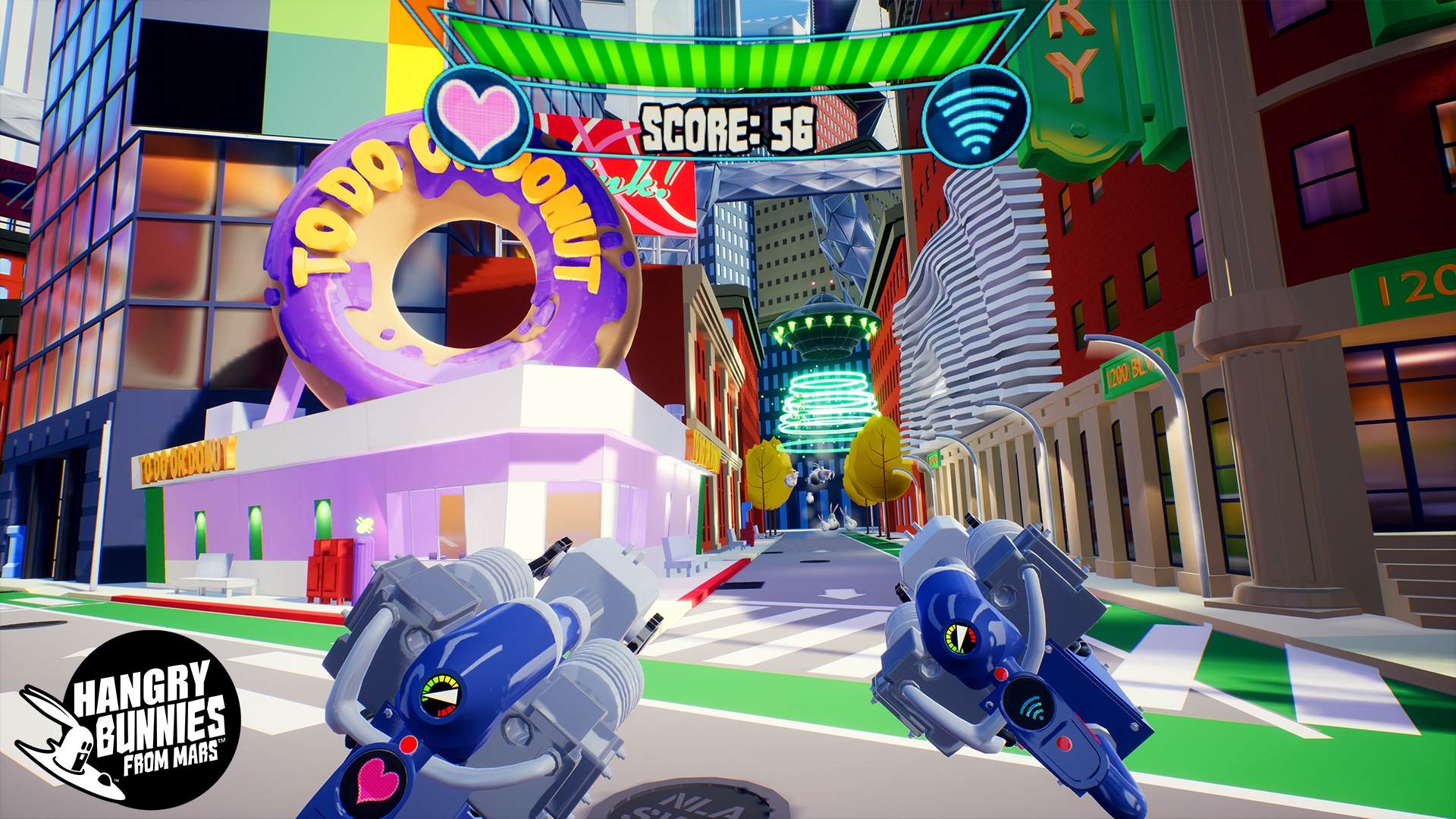 On the subject of crowd control, you are also equipped with two special abilities that have cooldowns. The invaluable “Hare Spray”, which will revert all bunnies back to their pleasant selves. I recommend just using this ability constantly instead of saving it for specific times. It affects all bunnies keeping them at bay and making them easier to kill when they’re not in their hangry form. The second ability “Critter Cluster Canon” will suck up all the close bunnies and then projectile them away from you. Be careful using this as you can still expect to take damage from the hangry ones when sucking them in close, this will also trigger the nice ones into meanies from being projectiled. I recommend firing “Critter Cluster Canon” at the sky as sometimes the bunnies will not travel far when shooting down range, bouncing off each other and getting stuck close to you.

The bunnies also come in a few variants. As well as the aforementioned fluffies you’ll encounter tiny scouts in spaceships that will indicate where the next wave will come from, as well as large monstrosities set on devouring you whole. The heavy monstrosities will be your biggest challenge as they take so much fire power to take down and give you no time to concentrate on the hordes. Unleash the “Hare Heaver” though and in 3 – 4 shots it will explode into some horrid green goo (depending on what difficulty you have it). Either that or you become the green goo. 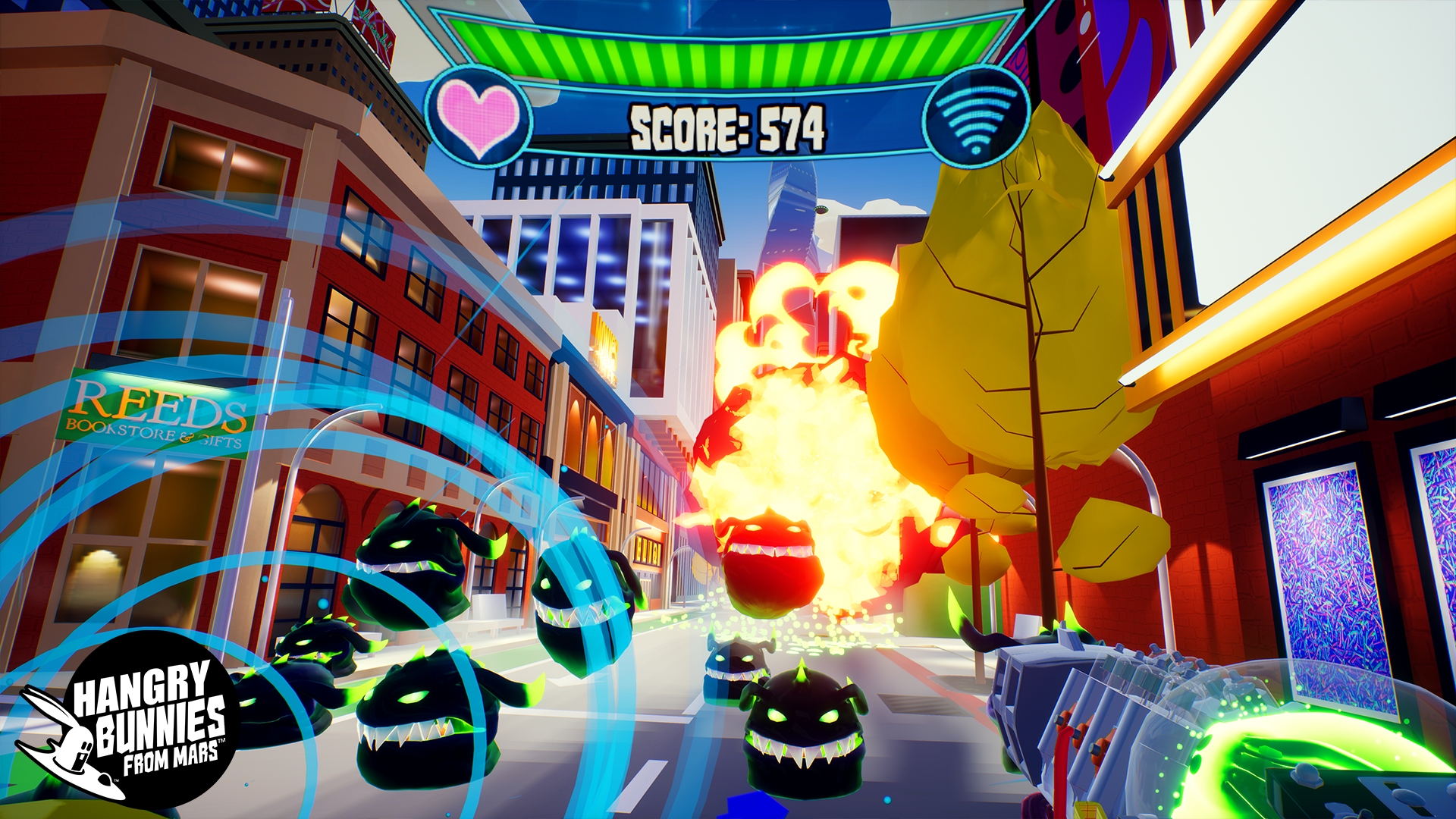 Lastly, you must watch out for the noisy evil bunny. Take this mofo out as quick as possible or you’re going to be in the darkness for some time with nothing but the red eyes of hangry bunnies to comfort you. This scary black bunny charges you and explodes on contact, near enough leaving you blind. You’ll see the red eyes of the hangry when they get close, but by then, they’re already too close! Luckily the black bunny screams for you, drawing attention, so keep your ears open as he can be a bit of a bullet sponge.

Unfortunately, there doesn’t seem to be much progression in Hangry Bunnies, no stages nor boss battles. Instead, you are flung into action that seems to just keep building with the quantity of enemies. Speed is your primary ally and later effectively placing your bunny grenades to crowd control and enable you to suck up bunnies for more ammo, your main strategic wall.

That being said it’s still a fun game. There’s never a dull moment as bunnies will always need blasting. They bounce everywhere leading to intense battles on all visual planes. The intensity and unpredictably of engaging the bunnies kept me entertained enough to smash the global leader board! 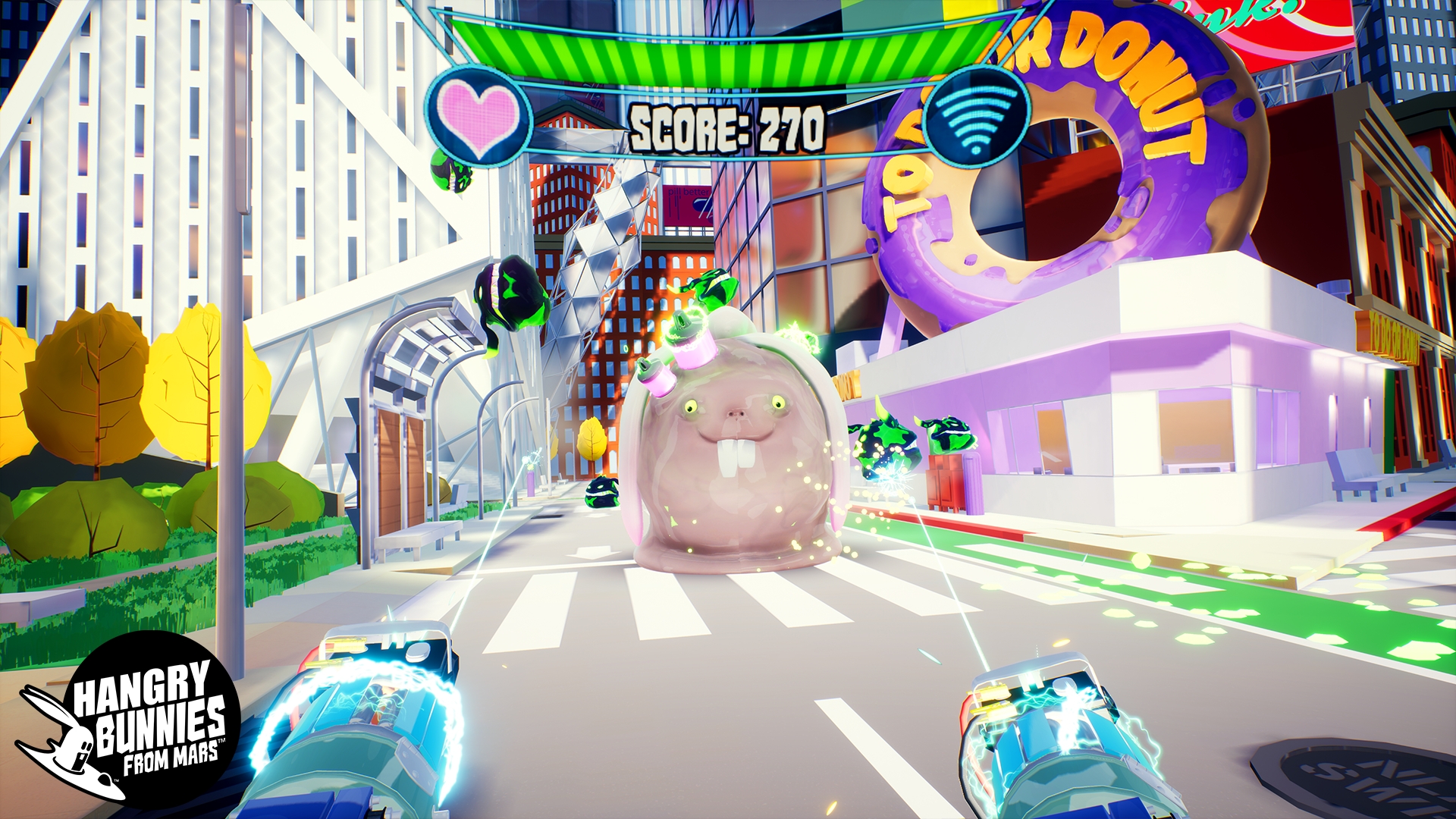 Overall Hangry Bunnies from Mars is a rather polished game with excellent voice acting! It has an abstract storyline with vibrant visuals and a funny dialog that will keep you chuckling.

Although, like most wave shooters Hangry Bunnies from Mars could be improved with the ability to change locations in the game (you’re always in one place) or have alternate mission objectives rather than just killing everything you see. Adding multiplayer support would increase fun 10 fold. Throwing in a change of enemy mechanics or having a stage event wouldn’t hurt either. The ability to interact with the environment in some way, to kill enemies or for entertainment a nice touch.

The content of this game is very one directional, yes it’s blast blast blast until you become overwhelmed. However, it never tried to portray itself as anything other than that and has focused on this one element in a fun way. Hangry Bunnies from Mars has the potential there to expand into a more feature rich story lined experience if it wanted to. It would be nice, although there’s still charm in exterminating this cuddly foe and competing with the other clones for the high score (which you’re not going to get because that means beating me, and we can’t have that now can we).

Can’t be bothered reading? We got you covered. Check out VRMETOKYO’s video review underneath: