In today’s world, you can basically type into Google any string of keywords which you would like in a game and it will display one or two games which fit your expectations. Type in anything, from “online football cash grab simulator” to “running around with goat smashing stuff” and you are assured to get hits. What you will not get however is the quality rating of how well the developers implement the game. You can have all the features you’d have ever desired in a game, but it still disappoints.

Indie developers are mostly the ones behind this as they try to fill their game with interesting features so their game gets as much attention and follows as possible. The main problem behind this is that there is no particular assurance of whether they can actually pull this game off. The sad thing is, this can also happen with games which do not even aim this high. Rigid Force Alpha, developed by com8com1 software is an example in this regard. Do not get me wrong, I am not slating the game is fun, but it feels very frustrating at times.  Let’s just give a bit of context first shall we?

Rigid Force Alpha pits you, the spaceship driving protagonist, in the midst of a war outside our home planet. Your advisor, PSYE, starts briefing you about the details of each mission just before, and you immediately start facing waves of enemies. There is a short tutorial which is optional but which I suggest not skipping, and the action then begins. Controls are relatively easy both on a keyboard and on the Xbox Game-pad; it is, after all, a shoot’em up game, so the key controls here are shooting and movement. You then begin your quest to save the bad guys from taking over this powerful resource which could shift the tides in the never-ending battle between good and evil.

And here we come to the crux of our review. The game is not terrible. It just feels as if everything is larger than it is supposed to be. I mean, three enemies take up the whole top right quarter of the screen. That’s not really desirable is it? And this is at the beginning of the game, mind you. You really do not have anywhere to navigate when there are some 10 enemies on screen as between your ship, the enemies and their projectiles you’ll eventually end up getting damaged. There also is not a set health bar on the screen, and sometimes you don’t even realize you got hit with an enemy’s shot as there is no feedback unless PSYE says you did get hit. She does this quite reliably, but if you get it twice within seconds she will still be doing the first hit’s dialog and you don’t even realize it. Moreover, there’s also the issue of collisions. 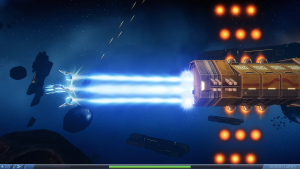 Collisions literally erase your ship from the map. You will get triggered when you shatter a rock to pieces and a small one gently rubs against the ship and it’s destroyed. You will also get mad when you have to navigate through maze-like buildings only to find enemies filling the point where you exit with bullets. Nothing but bullets!

Thankfully, you do get loads upon loads of upgrades which will make your ship a badass pain-selling merchant.. until the end of the level, where your upgrades get reset and you’ll have to earn them again. At least, this is not such a hard process as upgrades are frequently distributed through the game, either by destroying a white thing floating at you or popping out at random during gameplay. These upgrades can shift the tide of the game as they do pack a punch.

In terms of graphics, the game looks really good. Animations and effects are rendered very well, as well as the dialog from PSYE. Cutscenes are acted out brilliantly, and although there are not a lot of them, they do feel that heavy work was done in this department.

Check out our other Game Reviews HERE. 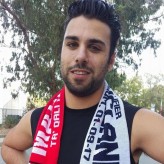